“Coal mining is a poor strategy to create jobs,” a policy director warns.

McDowell County was once the coal capital of America. Now it’s the poorest county in West Virginia. Life expectancy for men in McDowell County is lower today than it was in 1980, and is now equal to that of men in Ethiopia.

Paul Lewis and Tom Silverstone asked out-of-work coal miners why they supported Donald Trump. The answer was simple. Hillary Clinton literally promised that if she were elected, there would be “a lot of coal miners out of work.” Donald Trump promised to reopen the coal mines and get miners back to work.

But that’s unlikely to happen.

A Brief History of Coal 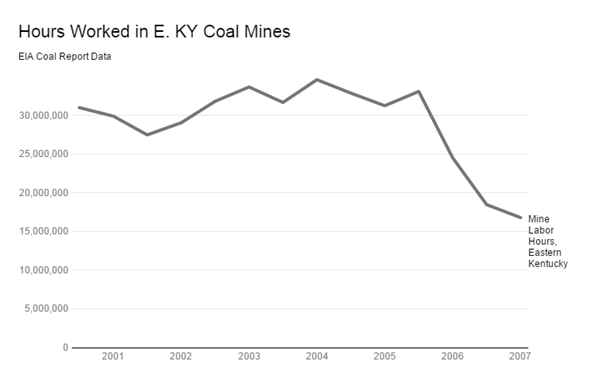 In a statement announcing the bankruptcy, Peabody blamed “a dramatic drop in the price of metallurgical coal, weakness in the Chinese economy, overproduction of domestic shale gas, and ongoing regulatory challenges” for the “unprecedented” industry downturn in recent years.

Automation and fracking killed coal. And neither are going anywhere anytime soon.

Nearly half of all the coal mined in the US each year comes from the Powder River Basin. There, 7,000 workers extract nearly 500 million tons of coal each year – an average of roughly 66,000 tons of coal for each worker.

“Starting in the early 1980s, mechanization and explosives replaced mine workers,” according to Kentuckians for the Commonwealth. Strip mining-like techniques vastly increased worker productivity. Kentucky coal production has declined by 19% while employment has dropped 62%.

Sheppard is partly right. Today, natural gas and renewable energy are cheaper and more abundant than coal. But that’s hardly a result of competition from the free market. There is no market for renewable energy. Solar and wind energies only exist because government insists on it, propping up well-connected companies with subsidies and tax credits. One such tax credit allows wind electricity producers to pay energy distributors to take their electricity and yet still make a profit.

Similarly, one reason natural gas is more abundant and cheaper than coal is the millions of dollars the federal government has sunk into hydraulic fracturing. 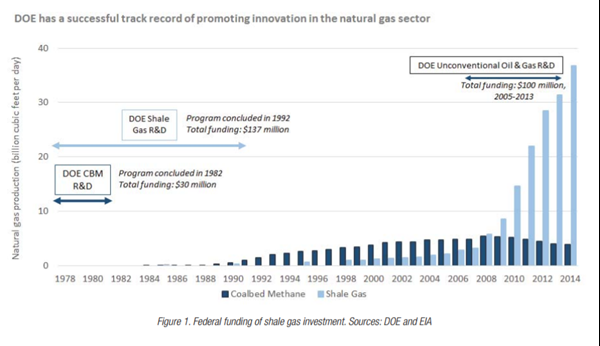 The DOE-sponsored Eastern Gas Shale Program studied directional drilling, microseismic monitoring of multi-stage hydraulic fracturing treatments, and modeling. These investments “helped demonstrate and commercialize many of the technologies in use today,” and “made the American shale revolution possible.”

At the same time DOE investment in fracking began to skyrocket, employment in coal mines began to dip precipitously. 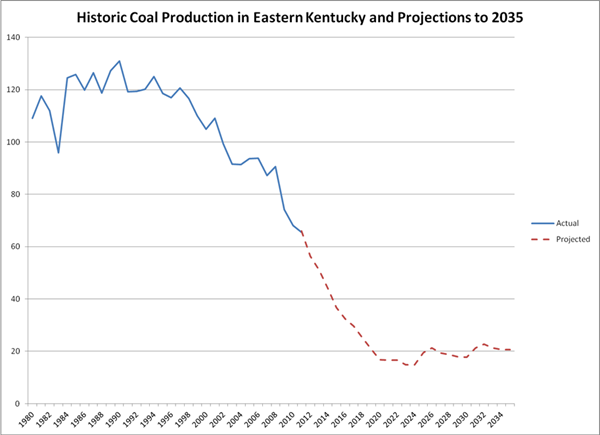 “The coal industry has been in steady decline for a decade, partly as a result of the natural gas boom,” wrote former mayor of New York City Michael R. Bloomberg.

“Regulations on the coal industry, as well as carbon emissions regulations more generally, have hurt the coal sector, as have subsidies for clean energy,” economist Lyman Stone wrote. “Meanwhile, cheap natural gas has dealt other fossil fuels, including coal, a body blow.”

Stone blames some of the steepness of the job losses in coal to unionism. Unions hindered mines’ attempts to restructure their workforces in light of decreased demand, resulting in large, yet unproductive labor pools. 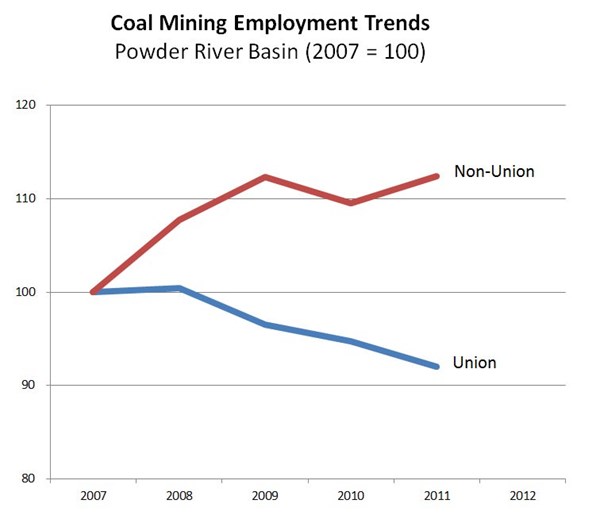 Natural gas would have likely replaced coal even without government help. But why didn’t industry pay for its own R&D? After all, the money is there. Natural gas pipeline operators’ profits rose more than 13% in 2015, to roughly $5.4 billion. Maybe, just maybe, it's related to politicians’ investments in fracking companies. Further, if the federal government is going to spend at least $237 million on fracking, why put just $14.5 million aside to retrain coal miners?

“All work has dignity and importance, whether done by a street sweeper, Michelangelo, or Beethoven,” wrote Sherrod Brown, an Ohio Democratic Senator in a recent op-ed for the New York Times. “People take pride in the things they make, in serving their communities in hospitals or schools, in making their contribution to society with a job well done. But over the past 40 years, as people have worked harder for less pay and fewer benefits, the value of their work has eroded. When we devalue work, we threaten the pride and dignity that come from it.”

Unfortunately, economists at the University of Massachusetts Amherst's Political Economy and Research Institute found that, even when counting the indirect jobs and other secondary jobs, nearly any other infrastructure investment produces more jobs than coal. “Coal mining is a poor strategy to create jobs,” de Place warns.

But that message isn’t getting through to voters in places like McDowell County. Coal miner Thomas Stern told NPR, “I'm starting on 32 years and it's a very good job. And I love coal mining. It's just a good way to make a living around here.”

Human nature remains strangely constant in the face of technological innovation. Frederic Bastiat trolled Luddites in 1845 with his Candlemaker's Petition. Bringing back coal in a natural gas economy is on par with blotting out the sun to protect candlemakers’ jobs.

We can do better than black lung in 2016.Creative destruction is unpleasant. One-third of McDowell County families live in poverty. More than 60 percent of families with children under five live in poverty. Bringing back coal won’t bring back jobs. And even if it did, we should be able to do better than black lung in 2016. Unemployment doesn’t create poverty. Scarcity does that. Scarcity creates poverty. Scarcity causes black lung. Scarcity makes us think that our best option is to vote against trade in order to get back into the coal mine.

Reducing the minimum wage can help incentivize employers to train new workers. Repealing licensure laws will help the unemployed find new jobs. Cutting red tape will help spur new business creation. And killing the payroll tax, which takes 30% of your first dollar earned, will help incentivize people to get back to work after their industries die out.

We can sympathize with the struggles of people dealing with economic change while hamstrung by the government. But sapping their self-reliance and fostering dependence with paternalistic “solutions” would only debilitate them further. And ultimately we must remember that the goal of public policy is not putting the people of McDowell County back in the coal mines: it’s getting the government out of the way of innovation so it can kill scarcity.