Trump’s victory can also be seen as a referendum on globalism and inequality.

It is of course true that racism and misogyny play an outsized role in American politics. Yet it’s neither true nor helpful to conclude, as Laurie Penny does, that “this election was, more than anything, about race.” Vox is running headlines saying “Trump’s win is a reminder of the incredible, unbeatable power of racism” and, I am not making this up, “These 2 charts explain how racism helped fuel Trump’s victory.”

The truth is more nuanced. As Virginia Postrel points out, many of Trump’s crucial working-class white voters previously voted for Obama, which undermines the racism explanation.

Yes, Donald Trump was elected in part because he spoke to the concerns of white working-class men. But Trump’s victory can also be seen as a referendum on globalism and inequality. It’s about the people that international trade and productivity have helped, and the people the American economy has left behind.

On the campaign trail, Trump threatened to start a trade war on behalf of those working-class men. If he succeeds, it will exacerbate unemployment and poverty. Let’s save the argument over just how racist and misogynistic Trump supporters are just long enough to save the American economy.

At the Detroit Economic Club, Donald Trump threatened Ford Motor executives with a 35% tariff on cars manufactured in Mexico. He’s made renegotiating the North American Free Trade Agreement part of his first-100-days agenda. Trump has threatened to put a 45% tariff on goods imported from China.

Donald Trump was wrong when he said, during the final debate, that America doesn’t make anything anymore. Manufacturing as a percentage of GPD hasn’t changed since 1960.

What has changed drastically is manufacturing as a percentage of employment, which is down by a third. 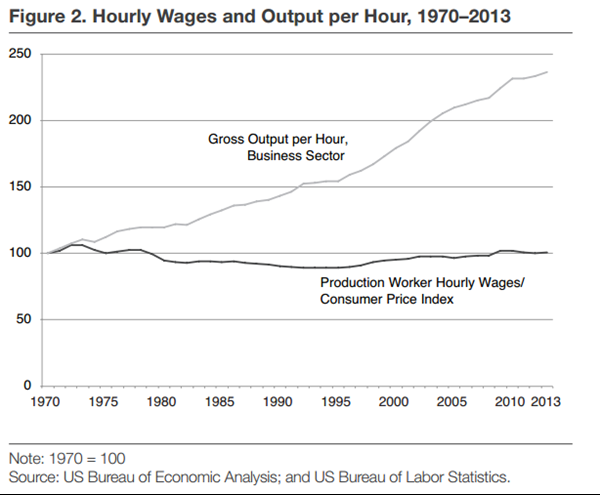 More than 20% of American men between the ages of 20 and 65 had no paid work last year. And seven million men between 25 and 55 are no longer even looking for work. Since the 1950s, the percentage of men who are in their prime working years who do not work has more than tripled. By 2050, a third of men between 25 and 54 without college educations could be out of work.

In May, Trump told Bloomberg Businessweek, “Five, 10 years from now—[it will be a] different party,” he said. “You’re going to have a worker’s party. A party of people that haven’t had a real wage increase in 18 years, that are angry.”

But raising tariffs won’t increase demand for low-skill, low-education American male labor. Quite the opposite. No one can fix unemployment by making American companies less profitable. Half of the 500 largest US companies’ combined revenue comes from international trade. Even if Trump could bully American companies into closing their factories in Mexico and reopening them in the US (unlikely), these firms will need to raise their prices and lay off workers to make up for the hit to their profits.

International trade has raised the average American household’s purchasing power 29%. Poorer families will be hardest hit by the extra we’ll all be paying for the goods we import from China.

Trade has increased the average US worker’s wages $1,300 annually over the past two decades. Demand for US labor will plummet if Trump gets his way as no one will be buying American-made goods, because China and Mexico will implement their own retaliatory tariffs.

Trump's trade policies are more likely to cost the U.S. 4 million jobs and start a recession, according to the Peterson Institute of Economics. 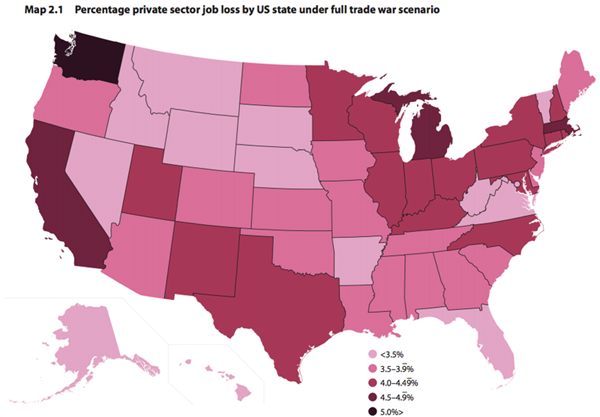 Don’t count on Congress to stop Trump from implementing his disastrous trade ideas.

Congress might rewrite the Trump tax plan, which calls for infrastructure investments on top of tax cuts will increase America’s outstanding national debt by 50%, costing us almost $7 trillion over a decade.

But “it has much less power to restrain Mr Trump’s protectionism,” according to the Economist. Congress passed legislation in 1917, 1962, 1974 and 1977 that gave the President the ability to impose import restrictions and tariffs without Congressional approval. “Existing laws allow the president to impose tariffs in very broadly defined circumstances, as Mr Trump gleefully noted during the campaign. He could use the president’s prerogative over foreign affairs to withdraw from the North American Free Trade Agreement with just six months’ notice.”

Don't count on Congress to stop Trump from implementing his disastrous trade ideas.Trump doesn’t even need to withdraw from NAFTA to kill trade between the US, Mexico, and Canada. He can just threaten companies with expensive investigations and aggressively enforce existing rules in order to bend them to his will.

“Now might be a good time for liberals to join those of us fighting to curtail presidential power,” Cato’s Mike Tanner recently wrote. “Senator Mike Lee’s Article One Project would be a good place to start.”

It’s time to recognize two things. First, the benefits of productivity and global trade have skipped over millions of Americans, particularly low-skill, low-education men. “Much of the wealth generated by the five biggest American tech companies flows to young liberals in California and the Pacific Northwest, exactly the sort of ‘global elites’ Mr. Trump railed against in his campaign,” Manjoo wrote.

Glenn Greenwald wrote about the forces that propelled Brexit and Trump: “The more economic suffering people endure, the angrier and more bitter they get, the easier it is to direct their anger to scapegoats.”

Second, imposing tariffs and tearing up trade deals won’t increase demand for their labor. “Minus taxes and some tax repatriation issues, much about Trump’s rhetoric has been antithetical to most of the big businesses that are driving the economy,” according to Box CEO Aaron Levie. Mark Suster, VC at Upfront Ventures, agreed. “Tech needs to take a deep breath, and then reflect on how this happened,” he said. “And have policy proposals that can realistically address the inequality in our country.”

Maintaining global trade will require understanding who globalism benefits, and who it hurts. It will require acknowledging the hard side of growth, and helping, not shaming, the people innovation left behind.