5 Reforms That Could Save Puerto Rico's Economy

Puerto Rico’s foreclosure rate has more than doubled in the last decade after the island faced a real-estate crash even worse than the one that sparked the mainland’s Great Recession. Last month Puerto Rico declared bankruptcy on its $73b debt, the largest in U.S. history.

This is definitely about politics.

“This is not about politics,” Former Gov. Alejandro García Padilla said of his refusal to negotiate in good faith with creditors. “It’s about math.” But like every government-created catastrophe, it’s about both.

American tax law created Puerto Rico’s manufacturing base more than 80 years ago by giving corporations tax incentives to build there. Then in 1996, President Clinton repealed Section 936 (which gave tax-exempt status to US corporations for income that originated in U.S. territories), sparking an 11-year (and counting) recession.

According to research from Anne O. Krueger, Ranjit Teja, and Andrew Wolfe for the Government Development Bank for Puerto Rico, repealing 936 “undoubtedly hollowed out the manufacturing base” in Puerto Rico. 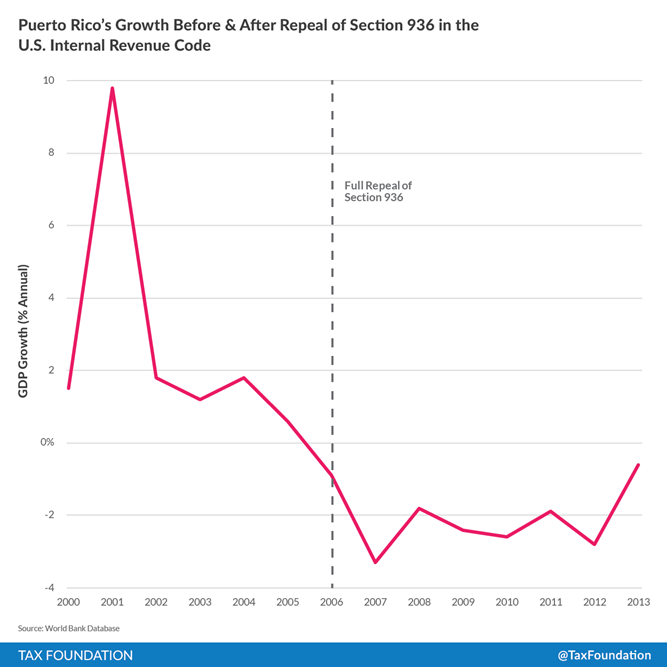 After the recession hit, Puerto Rico’s tax revenues began to decline. They did cut some expenditures but borrowed even more money to cover the shortfall by issuing more bonds. They were able to do this in part because Puerto Rico bonds are triple tax-exempt. Their interest cannot be taxed by federal, state, or local governments.

This rare subsidy makes them very attractive to investors. In 2013, it was estimated that 75% of municipal bond mutual funds included Puerto Rican bonds and more than 180 of them have portfolios that are more than 5% Puerto Rican bonds, according to estimates from investment research firm Morningstar.

What should Puerto Rico do?

“The first step is to revive economic growth,” Gov. Alejandro García Padilla said in 2015. “We will never get out of this vicious cycle. But we need to do more – much more – to return to riches and to become more competitive and have an expansion in the private market.” Truer words have never been spoken.

Krueger, et al point to data that suggest “a structural problem with competitiveness.” While US manufacturing has recovered post-recession, Puerto Rico’s has dipped further. Puerto Rico’s unemployment rate is 12%. Only 40% of Puerto Rico’s adult population is employed or looking for work. 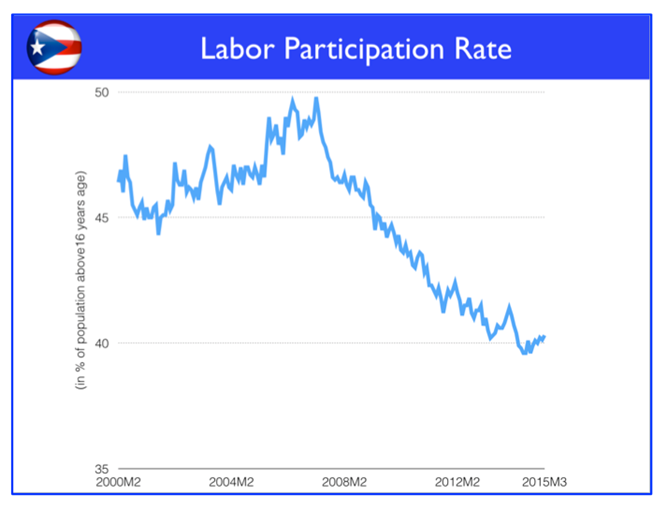 The federally mandated minimum wage is equivalent to a $19 an hour minimum wage on the mainland. This is well above what even progressive economists believe a market can bear without hampering employment.

Local overtime, paid vacation, and unemployment regulations are harder on Puerto Rico’s employers than the US mainland’s laws.

Electricity in Puerto Rico is several times more expensive than on the mainland, in part because one state-owned, inefficient, overstaffed organization (PREPA) produces all power using outdated technology.

Cato’s Richard W. Rahn says Puerto Rico should sell all of its interests in state-owned enterprises.

Being a small island, Puerto Rico needs to import a lot of goods. Krueger, et al support repealing their import tariffs, along with price floors and licensing requirements for ground transportation.

What should Puerto Rico not do?

The above reforms are necessary but insufficient to get Puerto Rico on solid ground. They also need to implement a payment plan for their debts.

Puerto Rico’s constitution requires the government to set aside funds for General Obligation bondholders. But Governor Rossello took $150 million out of that trust earlier this year. They’ve put a mere 6% of the budget toward debt service by defining the vast majority of the budget as “essential services.”

Rossello and the judge overseeing the bankruptcy are playing politics instead of doing math. They’re promising to pay the $37 billion they owe pensioners while stiffing bondholders, many of whom are American retirees who chose a supposedly low-risk investment because they don’t have time to make up for a big loss.

While it doesn’t play well with populists, bondholders need to be paid first. If Puerto Rico shirks this obligation, people will stop buying their bonds. This will increase the cost of borrowing, leaving Puerto Rico unable to finance its roads, parks, and hospitals.

Puerto Rico needs to stop playing politics and trying to be popular and start slimming down its government and paying its debts.

An average of 14 families lose their homes every day in Puerto Rico. Most of the victims are professionals, far from retirement. Bailing out pensions won’t help these families avoid foreclosure. The only thing that will help is a functional, growing economy.