I’ve been on Twitter for about three years. In that time, I think my most popular tweet had likes in the double digits, barely, and retweets in the single digits. This is fairly normal for most Twitter users. If you have a ton of personal friends on Twitter then maybe your average likes are in the triple digits and your retweets are in the double digits, but most of us don’t have friends who are dedicated enough to like and retweet all our tweets. (Which makes it easier, honestly. Means we don’t have to do it either.)

For a lot of people, the Twitter dream is to be “discovered” by Buzzfeed. You know what I mean – you hope they find your tweet, like it, screenshot it, and feature it in a listicle of “18 Boss Responses to Exes” or “24 Tear-Jerkingly Beautiful Love Letters to Cookies.” Most of those featured tweets don’t have that many reactions, which makes you think that there’s a real live actual chance that it could happen to you. It seems to happen to the average person, and you’re an average person. Never was it so great to be an average person.

But last week I tweeted something that ended up with 2,200 likes and 1,500 retweets in 24 hours. And Buzzfeed wasn’t even one of them. 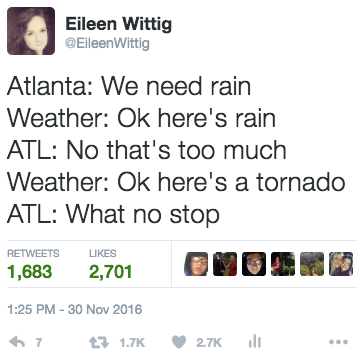 There was no strategy. I didn’t spend a lot of time thinking about what I would write or how I would phrase it. There were no #Hashtags. No emojis. No gifs. No images. Just letters. I tweeted it at one of the worst times – 1:25 p.m., right as the lunch coma starts to hit. It wasn’t posted at the top of the hour like analytics says to do. It wasn’t right before people got off work and were scrolling through Twitter trying to ride out the clock. It was a random thought I had at a random time which I spat just out.

(Actually, the whole thing is kind of insulting – tweets I spent time on and made me think I was a craft tweeter went nowhere, but something blurted and sent in five seconds goes viral? Really?)

The rest of the afternoon was spent trying to ignore my phone going off from notifications, which is honestly one of the more flattering problems to have (unless it’s your ex. Or your mother. Then you’re screwed.) It was coming up in people's suggested tweets. It was insane.

I don’t know. It was a fluke. It always is. It’s a random combination of luck and skill that you can never quite figure out. I can’t replicate it, and it will probably never happen again. It’s like when you drop something and somehow manage to catch it on top of your foot without even thinking about it. For the average person, that was your one moment of reflex and coordination glory, and you will always remember it, never to be seen again.