Why Patriarchy Once Made Economic Sense

It was an accident of economics that men were more valuable in the market economy than women.

It’s a word that elicits sighs and groans, especially from libertarians – Patriarchy. Feminists like to blame all of society’s ills on it. Libertarians like to pretend it doesn’t exist. But I’d like to make a case that patriarchy is actually a really important concept for anyone interested in economics to understand.

Sexism largely manifests itself in people acting rationally.Patriarchy describes the way ideas around gender, specifically performance and expectations, inhibit economic, educational, and personal growth. In other words, patriarchy is the word for systemic sexism.

Okay, but sexism works both ways. Actually, it works many ways. Men, women, and genderqueer individuals all experience sexism. Male oppression, such as higher instances of suicide, gender discrimination in child custody cases, and overrepresentation in dangerous jobs, are results of sexism, specifically from gendered expectations. So why gender a term for systemic sexism?

Because patriarchy describes a system wherein it’s assumed that the average man has more power than the average woman.

Power is a big term. But for my purposes, I’m going to talk about power in terms of choices. The more capital you have, the more choices you have. The same is true of rights and opportunities. Until about the 1970s, men held significantly more power than women on average. For example, an American woman couldn’t open up a credit card in her own name until 1972.

Why Did Men Hold More Power?

One reason men held more power until fairly recently is that men were more valuable in the market economy. 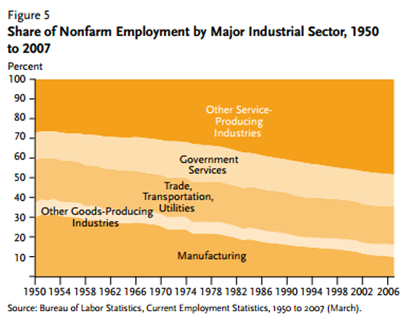 These are jobs that reward physical strength and endurance, something men have more of than women, on average.

The biggest myth about patriarchy is that it’s a conspiracy wherein men have banded together to exclude and hurt women. In reality, no conspiracy is necessary. It makes more sense to assume that banks didn’t give women credit cards because most women didn’t earn the money they’d need to pay off their debts than because they hated women.

That’s not a conspiracy. It’s individuals maximizing their personal advantage in the system they happen to inhabit.

But when that system favors men, the result is patriarchy. Men earned more money, and had more opportunities for earning money, than women. Putting them in a position of power over women, on average.

The US is moving from an economy where most people work in agriculture and manufacturing, to one in which most of the jobs are in information and services.

Women are, in many ways, better suited to these jobs than men are. Women are socialized to sit still and listen, making them better at school than men on average. They are taught to defer to others and to show empathy, making them better in service roles. Women have the comparative advantages that are highly valued in the new economy.

That’s part of why women’s labor force participation has risen dramatically at the same time manufacturing and agriculture have declined.

And this increase has had a positive impact on the economy. 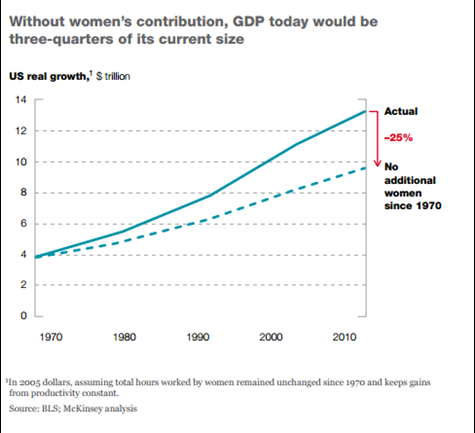 While patriarchy might have made sense in the previous economy, it simply doesn’t in the new one.

Most people still marry, and most couples prefer for one partner to take on the bulk of the domestic responsibilities, as opposed to outsourcing all of those tasks or splitting them evenly.

In a market economy wherein demand for the woman’s labor is higher than for the man, the couple that wants to be wealthier will task the man with the bulk of the domestic duties.

It’ll be interesting to see how individuals maximize their personal advantage when they happen to inhabit a system that truly empowers women.