What the US Can Learn From Portugal's Drug Decriminalization

Drug overdose deaths in Portugal are the second-lowest in the EU.

Maybe the USA can learn something from Portugal, where all drugs were decriminalized in 2001? 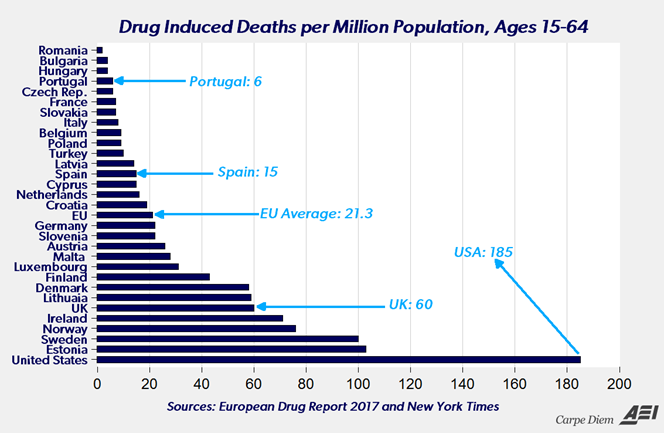 Portugal decriminalized the use of all drugs in 2001. Weed, cocaine, heroin, you name it – Portugal decided to treat possession and use of small quantities of these drugs as a public health issue, not a criminal one.

The drugs were still illegal, of course. But now getting caught with them meant a small fine and maybe a referral to a treatment program – not jail time and a criminal record.

Drug overdose deaths in Portugal are the second-lowest in the European Union.

Whenever we debate similar measures in the U.S. – marijuana decriminalization, for instance – many drug-policy makers predict dire consequences. “If you make any attractive commodity available at lower cost, you will have more users,” former Office of National Drug Control Policy deputy director Thomas McLellan once said of Portugal’s policies.

Joseph Califano, founder of the Center for Addiction and Substance Abuse at Columbia University, once warned that decriminalization would “increase illegal drug availability and use among our children.”

But in Portugal, the numbers paint a different story. The prevalence of past-year and past-month drug use among young adults has fallen since 2001, according to statistics compiled by the Transform Drug Policy Foundation, which advocates on behalf of ending the war on drugs. Overall adult use is down slightly too. And new HIV cases among drug users are way down.

Now, numbers just released from the European Monitoring Centre for Drugs and Drug Addiction paint an even more vivid picture of life under decriminalization: drug overdose deaths in Portugal are the second-lowest in the European Union.

The chart above is based on updated data on drug overdose deaths in Europe from the European Drug Report 2017.