US States Renamed as Countries with Similar GDPs

It’s pretty difficult to even comprehend how ridiculously large the US economy is.

Photo by Emiliano Bar on Unsplash

The map below matches the economic output (Gross Domestic Product) for each US state (and the District of Columbia) in 2019 to a foreign country with a comparable nominal GDP last year, using data from the BEA for GDP by US state and data for GDP by country from the International Monetary Fund (via Wikipedia).

Like in past years, for each US state (and the District of Columbia), I’ve identified the country closest in economic size in 2019 (measured by the nominal GDP) and those matching countries are displayed in the map and in the table below. Obviously, in some cases, the closest match was a country that produced slightly more, or slightly less, economic output in 2019 than a given US state. 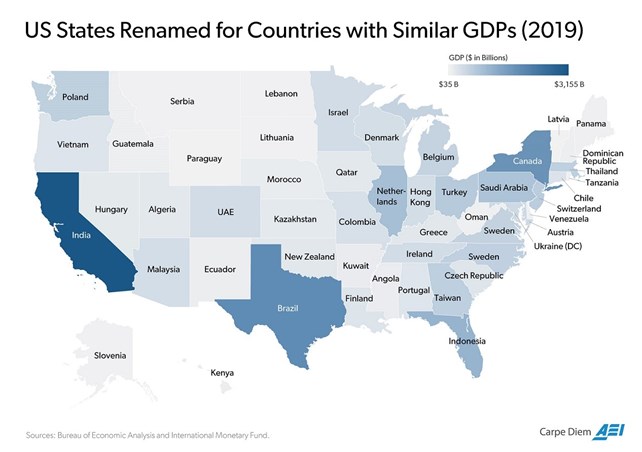 It’s pretty difficult to even comprehend how ridiculously large the US economy is, and the map above helps put America’s Gross Domestic Product (GDP) of nearly $21.5 trillion ($21,500,000,000,000) in 2019 into perspective by comparing the economic size (GDP) of individual US states to the entire national output of other countries. For example:

That’s a testament to the superior, world-class productivity of the American worker. Further, California as a separate country would have been the 5th largest economy in the world last year, ahead of India ($2.81 trillion), UK ($2.74 trillion) and France ($2.71 trillion).

2. America’s second-largest state economy—Texas—produced nearly $1.9 trillion of economic output in 2019, which would have ranked the Lone Star State as the world’s 9th largest economy last year. GDP in Texas was slightly higher than Brazil’s GDP last year of $1.85 trillion. However, to produce about the same amount of economic output as Texas required a labor force in Brazil (106 million) that was 7.5 times larger than the labor force in the state of Texas (14 million).

Amazingly, it required a labor force of 92 million more workers in Brazil to produce roughly the same output as Texas last year. Another example of the world-class productivity of the American workforce.

3. America’s third-largest state economy—New York with a GDP in 2019 of $1.73 trillion—produced slightly more economic output last year than the entire country of neighboring Canada ($1.70 trillion). As a separate country, New York would have ranked as the world’s 10th largest economy last year, ahead of No. 11 Canada ($1.70 trillion), No. 12 Russia ($1.64 trillion) and No. 13 Korea ($1.63 trillion). And it required a labor force in Canada of 20.4 million workers, or more than twice the size of New York’s (9.5 million) labor force to produce roughly the same amount of economic output last year! More evidence of the world-class productivity of American workers.

4. Other comparisons: Florida ($1.09 trillion) produced about the same amount of GDP in 2019 as Indonesia ($1.1 trillion), even though Florida’s labor force of 10.5 million is less than eight percent of the size of Indonesia’s workforce of 134 million.

Even with all of its oil resources and wealth, Saudi Arabia’s GDP in 2019 at $779 billion was below the GDP of US states like Pennsylvania ($814 billion) and Illinois ($898 billion).And even with the world’s largest oil reserves of more than 303 billion barrels (18 percent of the world total and more than 6X greater than America’s reserves), the GDP in socialist Venezuela last year of $70 billion was less than the GDP of all but eight US states, and less than the GDP of Delaware ($75.5 billion) and West Virginia ($78.3 billion).

Overall, the US produced nearly 25 percent of world GDP in 2019 ($87.2 trillion), with only about 4.3 percent of the world’s population. Four of America’s states (California, Texas, New York and Florida) produced more than $1 trillion in output and as separate countries and each would have ranked in the world’s top 17 largest economies last year. Together, those four US states produced nearly $8 trillion in economic output last year, and as a separate country would have ranked as the world’s third-largest economy.

Adjusted for the size of the workforce, there might not be any country in the world that produces as much output per worker as the US, thanks to the world-class productivity of the American workforce. The map above and the statistics summarized here help remind us of the enormity of the economic powerhouse we live and work in. So let’s not lose sight of how ridiculously large and powerful the US economy is, and how much wealth, output and prosperity is being created every day in the largest economic engine there has ever been in human history.

This comparison is also a reminder that it was largely free markets, free trade, and capitalism that propelled the US from a minor British colony in the 1700s into a global economic superpower and the world’s largest economy, with individual US states producing the equivalent economic output of entire countries. 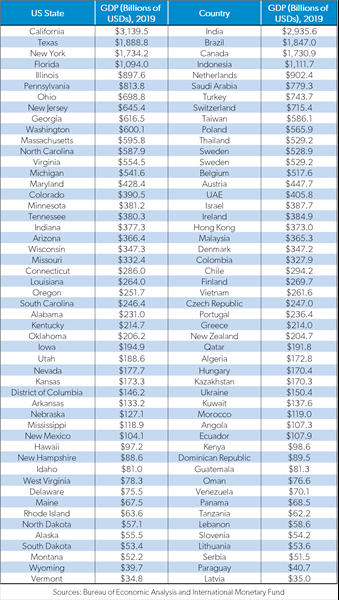 This article is republished from the American Enterprise Institute.