NYC Has Lost 4,000 Jobs in the Restaurant Sector Alone in the Last Year

The recent news reports on the fallout from New York City’s $15 an hour minimum wage are not encouraging.

New York City businesses have been struggling with higher labor costs brought about by the new $15 an hour city minimum wage that went into effect at the end of last year for “large employers” of 11 employees or more. That’s the third minimum wage increase in three years, and is an increase of more than 36 percent over the last two years from the $11 an hour minimum wage at the end of 2016, and a whopping increase of 107 percent since 2013 when the minimum wage in New York State (and NYC) were determined by the federal minimum of $7.25 an hour.

The current state minimum wage outside of NYC is $11.10 an hour, so employers in the city are faced with paying a large 35 percent wage premium compared to their counterparts outside of the metro area for low-skilled workers. And it’s having a devastating effect on the city’s small businesses and restaurants. 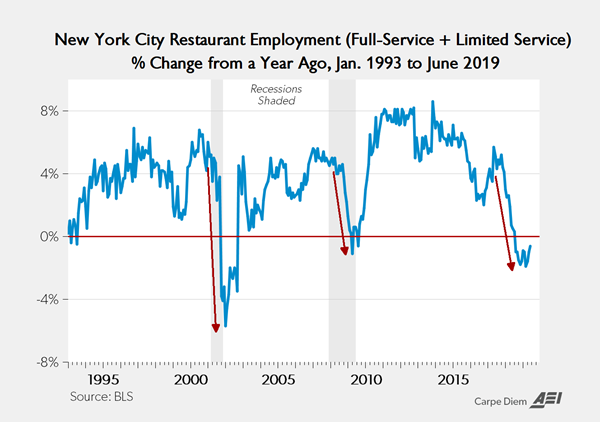 Here are some of the recent news reports on the fallout from New York City’s $15 an hour minimum wage:

Thomas Grech, president of the Queens Chamber of Commerce, said he has seen an uptick in small-business closures during the past six to nine months, and he attributed it to the minimum-wage legislation. “They’re cutting their staff. They’re cutting their hours. They’re shutting down,” he said. “It’s not just the rent.”

Roughly 77 percent of NYC restaurants have slashed employee hours. Thirty-six percent said they had to layoff employees and 90 percent had to increase prices following the minimum wage hike, according to a NYC Hospitality Alliance survey taken just one month after the bill took effect.

6. Restaurant jobs on the decline

Last year the city lost about 6,000 restaurant jobs, a decline of 3.4%, according to an analysis by the Independent Budget Office, which used seasonally adjusted numbers for the fourth quarter, marking the first time in more than a decade that jobs in the industry declined.

7. Art Laffer: Raising the minimum wage is the best way to hurt the poor

The chart above shows graphically the New York City “restaurant recession” that has resulted from the recent minimum wage increases. According to BLS data, the restaurant job losses in the city this year are even steeper and longer-lasting than the job losses during the Great Recession and are the most severe loss of food service jobs since the 2001 recession and the devastating effects the 9/11 terrorist attacks had that year on tourism and restaurant traffic.

Compared to the first half of last year when there was an average of about 318,000 restaurant jobs in the city, there were only slightly more than 314,000 restaurant employees during the same period this year, representing a loss of nearly 4,000 food jobs over the last year at a rate of 11 jobs lost on average every day.

New York City could be the “canary in the coal mine” that predicts what happens when politicians engage in “political wage setting.”

We hear a lot of concern from politicians like Sen. Sanders and AOC about the importance of “living wages” for low skilled workers, but they show no concern about the “living profitability” of small business owners and restaurateurs in places New York City who struggle to remain profitable paying artificially high government-imposed wages and are forced to lay off workers and many close down.

New York City could be the “canary in the coal mine” that predicts what happens when politicians engage in “political wage setting” and force significantly higher labor costs on business owners that put jobs at great risk as well as jeopardizing the financial profitability and long-term viability of many restaurants and other small businesses.