The United States has one of the highest statutory corporate tax rates in the developed world, and our productivity, deficit, and wages are suffering for it.

We heard in July that the federal budget deficit had risen to its highest level in 2 years. The widening deficit is said to be the result of weak corporate tax revenues and low productivity. Given that the conventional wisdom from progressive politicians is to increase tax rates to drive up tax revenue, why is it that the highest corporate tax rates in the OECD are reaping less revenues (as a percent of GDP) than low-tax economies? 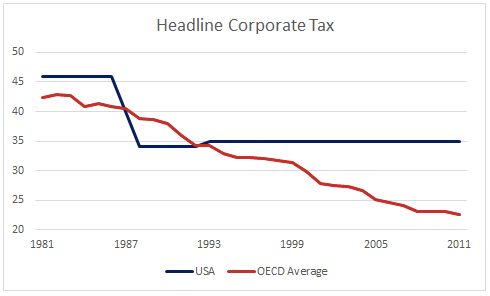 As a result of the extortionately high corporate tax rates in the United States, so out of sync with the rest of the world, many American corporations choose instead to invest overseas and register their headquarters in low-tax countries. At the same time, a larger proportion of business income is now earned by pass-through entities, meaning these entities can forgo paying corporate tax all together. High rates of tax create perverse incentives for investors to keep their money out of the US whilst encouraging entrepreneurs to seek new avenues for avoiding paying the tax, or at least minimizing the rate at which they contribute.

To sum up, the United States is a global loser in the race to abolish corporate tax. As a result, capital investment is lower, wages are suppressed, productivity is down, and the budget deficit continues to widen as corporate tax revenues become anemic. The evidence is clear: the costs of corporate tax are extremely damaging to everyone, not just corporations. Perhaps it’s time to time to join the global race in abolishing this outdated burden.