The $15 Minimum Wage and the End of Teen Work

Labor Economics in Seattle and Beyond

A new report from JP Morgan Chase & Co. finds that the summer employment rate for teenagers is nearing a record low at 34 percent. The report surveyed 15 US cities and found that despite an increase in summer positions available over a two year period, only 38 percent of teens and young adults found summer jobs.

This would be worrying by itself given the importance of work experience in entry-level career development, but it is also part of a long-term trend. Since 1995 the rate of seasonal teenage employment has declined by over a third from around 55 percent to 34 percent in 2015. The report does not attempt to examine why summer youth employment has fallen over the past two decades. If it had, it would probably find one answer in the minimum wage.

Most of the 15 cities studied in this report have minimum wage rates above the federal level, with cities such as Seattle having a rate more than double that. Recent data from the Bureau of Labor Statistics seen in the chart show exactly how a drastic rise in the minimum wage rate affects the rate of employment. 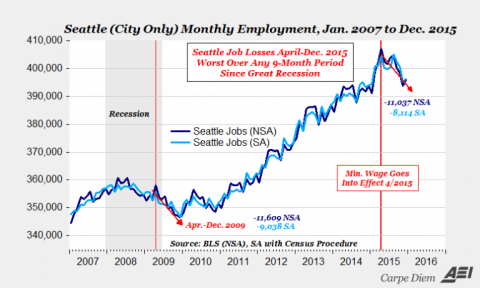 Seattle has experienced the largest 3 month job loss in its history last year, following the introduction of a $15 minimum wage. We can only imagine the impact such a change has had on the prospects of employment for the young and unskilled.

Raising the minimum wage reduces the number of jobs in the long-run. It is difficult to measure this long-run effect in terms of the numbers of never materializing jobs. However, the key mechanism behind the model—that more labor-intensive establishments are replaced by more capital-intensive ones—is supported by evidence. That is why recent research suggesting that minimum wages barely reduce the number of jobs in the short-run, should be taken with caution. Several years down the line, a higher real minimum wage can lead to much larger employment losses.

Nevertheless, politicians continue to push the idea that minimum wage laws are somehow helping the young “earn a decent wage.” It is important to remember the underlying motives behind pushes for higher minimum wage rates. Milton Friedman characterized it as an “unholy coalition of do-gooders on the one hand and special interests on the other; special interests being the trade unions.”

Several empirical studies have been conducted over the course of more than two decades, with all evidence pointing toward negative effects of minimum wage rises on employment levels among the young and unskilled. A study conducted by David Neumark and William Wascher in 1995 noted that “such increases raise the probability that more-skilled teenagers leave school and displace lower-skilled workers from their jobs. These findings are consistent with the predictions of a competitive labor market model that recognizes skill differences among workers. In addition, we find that the displaced lower-skilled workers are more likely to end up non-enrolled and non-employed.”

Policy makers who continuously raise the minimum wage simply assure that those young people, whose skills are not sufficient to justify that kind of wage, will instead remain unemployed. In an interview, Friedman famously asked “What do you call a person whose labor is worth less than the minimum wage? Permanently unemployed.”

The upshot: Raising the minimum wage at both federal and local levels denies youth the skills and experience they need to get their career going.