Housing spply isn't being allowed to keep up with demand.

House prices continue to rise dramatically across the US, particularly in urban areas. The ever escalating prices make the “American Dream” of owning a home far less likely for an increasing number of millennials. With around one third of American households now renting homes and apartments, we have to ask ourselves – why is the American Dream dying?

Data from the Census Bureau report last week revealed that the US homeownership rate stands at a mere 63.5%. Whilst this is up slightly from a record low of 62.9 percent in the previous three months, it is still down year-on-year from Q3 2015.

The unaffordability problem is a supply issue with housing supply falling short of demand by around 430,000 units in 2015. We are currently facing a severe lack of housing that will only result in continued price rises (and more inflation), unless drastic action is taken to enable substantial growth in supply.

Minimize the regulation of vacant lands outside of incorporated cities.

As house prices continue to rise much faster than incomes, the biggest hurdle to buyers is affordability as it becomes increasingly hard to save for a down payment. – What is interesting, however, is that the unaffordability of houses in urban areas is only limited to certain cities. Whilst cities such as San Francisco become increasingly unaffordable, some of the nation’s fastest growing cities such as Dallas remain very affordable. 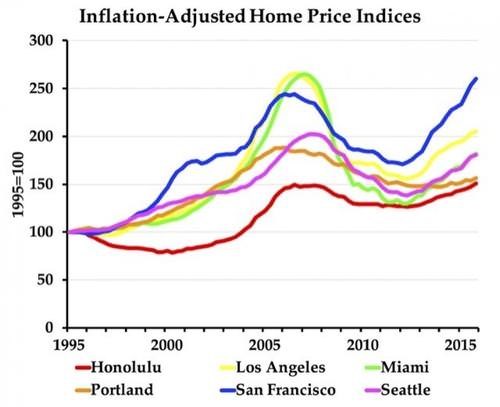 The reason for this great disparity in affordability between U.S. cities is the result of limited supply in some cities with heavily restrictive building regulations contrasted with cities such as Dallas, which tend not to take drastic action to control urban sprawl. 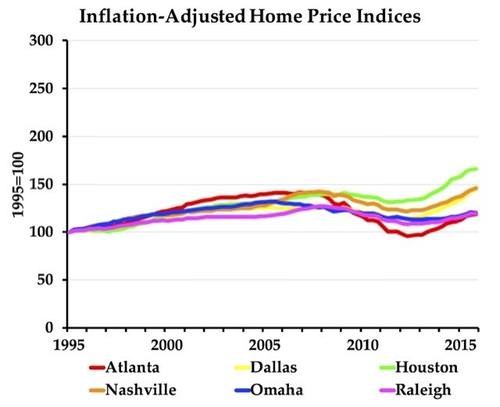 The Link Between Zoning and High Prices

A study by Economists John Glaeser and Joseph Gyourko analyzing the impact of building restrictions on housing affordability found that “zoning and other land-use controls are more responsible for high prices where we see them…Measures of zoning strictness are highly correlated with high prices”. If policy advocates are truly interested in making housing more affordable, they would do well by starting with zoning reform.

Similar findings are highlighted in a policy paper recently released by the Cato Institute’s Randal O’Toole. The paper underlines how municipal governments, especially at the county-level, impose strict growth management policies and heavy-handed regulation of land use to prevent urban sprawl. The result of this approach in many of America’s urban areas has meant median home prices typically being two to four times more than homes in unmanaged areas.

It is also important that the Federal government does not misdiagnose this crisis as one of demand and not supply.

Randal hits the nail on the head by prescribing: “Minimizing the regulation of vacant lands outside of incorporated cities. Allowing developers to build on those lands in response to market demand will also discourage cities from overregulation lest they unnecessarily push development outside the city”.

Unfortunately, the actions taken by many municipal governments thus far have been entirely contrary to the suggested prescription suggested by Randal. This is certainly the case here in Northern Virginia, for example, Fairfax County has vast swaths of land listed on the zoning ordinance as 1-2 du/ac meaning only 1-2 dwellings can be constructed per acre. Not to mention the thousands of acres reserved for public parks, farmland and the all-important golf courses.

A recent Mercatus Center research paper noted that the biggest barrier to reforming land-use regulation would be the vested interests or NIMBY’s (Not In My Backyard) preventing such reforms at a local level. One possible way suggested by the authors of increasing the feasibility of such reforms would be to shift the implementation of zoning powers from local to state level, further removing policymakers from opposition to development.

Whoever the next President is, action should be taken to encourage state and local governments to reduce land use constraints such as urban growth boundaries. It is also important that the Federal government does not misdiagnose this crisis as one of demand and not supply. Federal government policies aimed at increasing demand will only worsen the situation by pushing house prices even higher in areas with supply restrictions.

If we are going to preserve the American Dream, we are going to need an industrial house building revolution. The only legitimate solution to this housing crisis is to repeal the state and local rules that restrict urban expansion and move decision making powers from local to state level to prevent NIMBY’s from killing the American Dream for millennials and for generations to come.