The Rickmobile's Secret to Success Is ... Secrecy

Combine pop culture and capitalism and you get an uncontrollably good squantch.

I started watching Rick and Morty when the pilot episode of Season 3 came out a few weeks ago. I began with that episode, then went back to the beginning and watched almost the entire thing in an afternoon. And just like that, I was a member of one of the most eccentric, bubbly fan clubs currently active.

Imagine my excitement when I found out the Rickmobile is a thing, and that it was coming to Atlanta.

Everyone wanted to see the legendary Rickmobile.The Rickmobile is a truck with a giant, crouching Rick built onto the back to stare at any drivers following him as he drives around the country on his Don’t Even Trip Road Trip promotion. His side opens up to reveal a gift shop full of limited-edition merchandise, unavailable anywhere else. It’s a huge pop culture celebration of capitalism, the modern ease of travel, and the technology that lets such a ridiculous car be built.

So I went to see it last night.

All my friends who had seen the show wanted to go to the Rickmobile. Those who couldn’t come were jealous. Some even gave me money to buy them souvenirs while I was there. It was a rare opportunity: not every major city in the country is scheduled to be honored with a visit from Giant Rick, and Atlanta was the first stop on the five-month tour. We were the experiment. No one knew what to expect in terms of crowd turnout, pricing, or even what products would be available for sale.

The only reason I know what they were selling at all is because of Twitter.

I never made it to the gift shop. I stood in a serpentine line, spontaneously created, curving and doubling on itself through a parking lot, for three hours. I got there about half an hour after the event began, but even if I’d made it on time it wouldn’t have mattered. To make it to the shop, you would’ve had to get there at least half an hour before it began.

I’m not sorry I went. I had a good time and I got to see the one and only Rickmobile. But the experiment ended up being as much about entrepreneurship, economics, and human nature as it was about pop culture popularity.

The Secret to Success Is … Secrecy

The business strategy itself was good: take a totally original, never-before-seen vehicle that’s perfect for selfies around the country, selling secret special-edition merchandise. Stay in each city for only a day or so, open the shop for just three hours, and then move on, never to be seen again.

In fact, the idea was so good, they weren’t ready for the number of people who came out.

Part of the strategy was to keep the majority of the products a secret until after the shop had opened up. That’s great for hype, but it meant that people took a long time to decide what they wanted, since they hadn’t known what their options were. Include the fact that customers were limited to two products per person, and you’ve got yourself a mess. It’s a good problem to have, but only if you have the luxury of longer business hours. And being inside. Instead of, you know, outside. In a parking lot.

After I’d been in line about half an hour, a few employees came down the line to tell us that they might run out of merchandise. But we stuck it out, and their time in the parking lot ran out before they ran out of products.

I was going to be a little mad if they ran out of backpacks before it was my turn. This ending, at least, seemed less avoidable and therefore less irritating (I know it doesn’t entirely make sense, just let me have this one. I’m trying to make myself feel better).

The other part of the problem was an issue of pricing. I expected all the products to be priced relatively high, since they were special edition and only available in the Rickmobile. But it turned out that everything was priced surprisingly affordably: the cheapest things were $8, and the most expensive things were $40. Not what I was expecting at all.

Hopefully they'll come again and I can get schwifty after a mere one hour wait instead of three.At first glance, that doesn’t seem like a bad thing. If the pop-up shop had had longer hours and more merchandise, it wouldn’t have been. But part of the point of having a wide range of products with a wide range of prices is that it limits the number of people who can afford the more expensive things.

This initially seems unfair, but when you’re pressed for time and only limited to two items, it actually makes your decisions easier and faster if you’re limited to a certain price bracket. With every product – or nearly every product – within your price point, you have more to choose from, which takes up more time.

Again, not a problem for a normal store or even a pop-up with longer hours. But when you only have three hours to sell to hundreds of people, you need to find ways to get people through quickly. Even just looking at the list of items at home, I couldn’t decide what I wanted. I wanted more than two things (still do), and I could afford more than two things. I would’ve been a pain last night trying to decide at the counter, with who knows how many people behind me. Limiting different groups of people to different options is one way, without simply limiting the number of options themselves or pricing everything above the majority of people’s budgets.

Rick and Morty has a fairly niche audience – young adults with quirky, very dry senses of humor. Ninety-nine percent of the turnout fell into this category. I think I only saw a few people who looked to be over the age of 40, and only a couple of people who seemed to be younger than high school age. Because everyone was there to celebrate a very specific thing, there was a sense of community that helped the three hours pass by. Everyone was pretty calm, even though the line was moving very slowly. We were on a mission, and we respected that everyone else was too.

The problem with being a singly-motivated niche market is that everyone is very stubborn. My friend and I decided we would try to game the system by waiting for the weaker fans to give up and drop out of the line, like the survival of the fittest. However, the problem with gaming the system is that it only works if the minority do it. If, on the other hand, 90 percent of those present all have the same idea, it doesn’t work at all. Which is what happened to us. 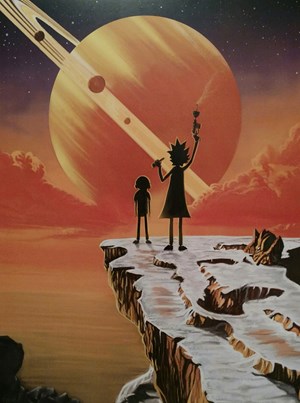 Despite the sheer stubbornness, subsequent long wait times, and seeing the shop close before many of us even had a chance to see inside, I only noticed a few people who were actually upset about the whole thing. Almost everyone there understood that these things tend to happen with pop culture events and that being the first stop on the tour meant there was no data to gauge how long the event should go or how much merchandise would be necessary. When people left, they didn’t look angry. They looked like they’d given something their best shot and were content to try again another time.

It wasn’t a total waste of time, though. We were rewarded for unyielding with free stickers and free art prints, and there’s talk of the Rickmobile returning to Atlanta in a few months as they bring the road trip back to the southeast. Hopefully then I can get my Rick and Morty special-edition backpack after a mere one hour wait instead of three, and get schwifty in peace.