From the beginning of the battle against the coronavirus, the FDA has slowed American medical companies' ability to respond at full capacity.

For many Americans, the FDA has taken on a sort of mystique as the gold standard of medical guidance—similar to the emotional connection many Britons feel for the National Health Service (NHS). Unfortunately, both of these government bureaucracies actively undermine the healthcare systems of their nation. As the continuing coronavirus places a larger microscope on the agency’s actions, hopefully more are waking up to the costs inherent to their management.

From the beginning of this battle, the FDA has slowed American medical companies' ability to respond at full capacity.

For example, it was FDA regulations that significantly slowed the creation of testing kits in the early days of the crisis. While the CDC’s government labs were creating fatally flawed COVID-19 tests, private labs were desperately trying to receive waivers to ramp up their own efforts. On February 24, the US Association of Public Health Laboratories made desperate appeals to get into the game. Although the FDA tweaked its rule five days later to allow labs to begin testing kits (though it still barred their active use without approval), it wasn’t until March 16 that the FDA finally removed its grasp on the private sector and allowed labs get approval through state agencies.

The impact was immediate:

In the words of Balaji S. Srinivasan, a Peter Theil-ally who interviewed with the administration in 2017 to lead the agency, “FDA’s initial delay set the US back six weeks, blinding us to the scale of the epidemic, and turning a containable epidemic into a crisis.”

While the FDA has taken its foot off the hose of testing production, it continues to restrict their uses. Earlier this week, the FDA took the position that their policy changes will not apply to at-home testing. This decision has forced labs that have developed and produced such products to shutdown distribution that was already underway. The bureaucratic freeze on testing forces Americans into hospitals, clinics, and other testing centers. As Srinivasan notes, this decision openly promotes greater spread:

FDA is trying to shut down at-home testing! Here’s why that’s a bad idea:

FDA is trying to shut down at-home testing! Here’s why that’s a bad idea:

1) Hospital visits themselves can cause infections.

2) Many errors in at-home sample collection can be detected with positive/negative controls, in which case the result is a retest — rather than no test! https://t.co/U7ehGpllq0 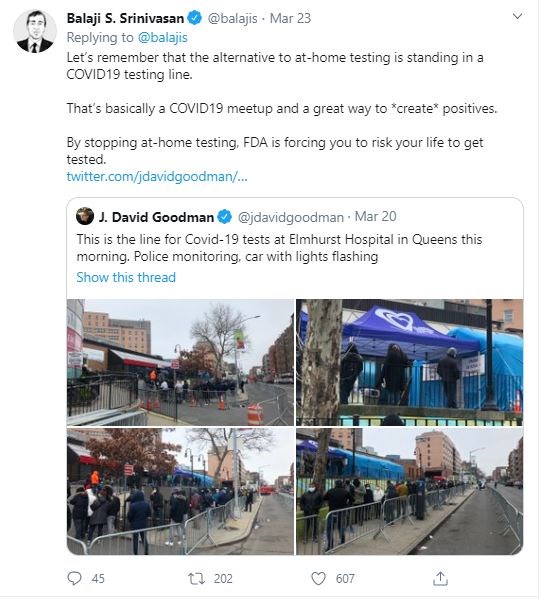 This is not the only example this week of the FDA undermining recovery efforts. Recently Elon Musk acquired a stock of a 1,000 respirators. Unfortunately on Monday, the shipment ended up being stalled at LAX by none other than the FDA.

With the focus now on treatments and preventative measures, the FDA continues to be an anchor dragging down the ability of the American private sector to innovate our way out of a crisis.

Trump has famously pushed a mix of antimalaria medicine and Z-Packs as a potential treatment. Although the media have tried to attack the president for offering unqualified medical advice, his medical advice has been supported by studies in countries outside the FDA’s restrictive regime. As the Wall Street Journal reports:

A more recent French study used the drug in combination with azithromycin. Most Americans know azithromycin as the brand name Zithromax Z-Pak, prescribed for upper respiratory infections. The Z-Pak alone doesn’t appear to help fight Covid-19, and the findings of combination treatment are preliminary.

This is not the first time that FDA red tape has allowed Europe to lead in health treatment. The overbearing American regulations have even pushed US athletes overseas for rehab treatments and other basic health needs.

As the Trump administration continues to indicate that they are pushing away from a total-lockdown approach to the virus and toward opening the American economy back up, breaking down the American bureaucratic machine is going to be vital to minimizing the already catastrophic damage done.

Hopefully, a silver lining of this current crisis will be an American awakening to what has long been clear: the costs of the FDA bureaucracy is a far greater public health risk than any of the advantages that it claims to provide. It’s past time to scrap the agency altogether.

This Mises Institute article was republished with permission.

Tho is an assistant editor for the Mises Wire, and can assist with questions from the press.