Sports Fans Win Big from Legalizing Gambling, Now Keep Congress Out of It

Very rarely do I have a reason to praise Chris Christie, but he delivered one today by winning his Supreme Court case granting states the power to legalize online gambling.

The Unseen of Sports Gambling

A desire for a gambling edge has led to all sorts of fascinating research in fantasy strategy itself. For example, Shawn Siegele of Rotoviz applied Nassim Taleb's work on antifragility in his analysis on what he deemed a "zero-running back strategy." Another fantasy entrepreneur, JJ Zachariason, applied economic analysis to position value to argue against selecting early-round quarterbacks in his popular e-book "The Late Round Quarterback." Again, money invested in the industry allowed others to create a career analyzing the subject in ways that have enhanced the understanding of millions of football fans. The division of labor at work.

Legalization of online sports gambling comes at a particularly interesting time for sports. The recent struggles of ESPN may in large part be due to increased politicization of its analysis, but it's also a reflection of changing media trends as a whole. Podcasts, YouTube, social media (particularly Twitter), and an endless supply of online blogs have allowed sports fanatics all sorts of new ways to consume serious sports analysis. As outlets such as the long successful Rivals.com have shown, the particularly devoted sports fan is willing to pay for high quality, niche-specific content. (A similar strategy is being embraced by The Athletic, which has invested tens of millions in a pay-for-content online model.) ESPN is trying to tap into this market with its new ESPN+ service, and it will be interesting to see what sort of gambling-specific products emerge on the platform.

Unfortunately, while sports fans should benefit from today's decision, there still remains the question of how the Federal government will respond.

So, is online sports betting in your future? Not if some Republican senators have their way.

Back in 2015, Senator Lindsey Graham (R-SC), with eight cosponsors, including Republican senators Tom Cotton, Mike Lee, and Marco Rubio (and one Democratic senator, Dianne Feinstein), introduced the Restoration of America’s Wire Act (S.1668) to “restore long-standing United States policy that the Wire Act prohibits all forms of Internet gambling, and for other purposes.” The bill would amend provisions of the federal criminal code, commonly known as the Wire Act, to provide that the prohibition against using a wire communication facility for the transmission of bets or wagers, wagering information, or wagering proceeds shall: (1) apply to any bet or wager (currently, to bets or wagers on any sporting event or contest); and (2) include any transmission over the Internet carried interstate or in foreign commerce.

The bill was referred to the Senate Committee on the Judiciary, where it could still come up for a vote.

A new bill to effectively ban online gambling on a federal level, with a stated purpose almost as long as its text, was introduced in the Senate in September by Tom Cotton. Co-sponsored by Senators Mike Lee and Lindsey Graham, the bill (S.3376) is a “reaffirmation of the prohibition on funding of unlawful internet gambling.” It is designed to “ensure the integrity of laws enacted to prevent the use of financial instruments for funding or operating online casinos are not undermined by legal opinions not carrying the force of law issued by Federal Government lawyers.” The complete text of the bill reads:

The Memorandum Opinion for the Assistant Attorney General of the Criminal Division of the Department of Justice, dated September 20, 2011, shall have no force or effect for the purposes of interpreting section 5362(10) of title 31, United States Code.

That’s it. A one-sentence bill. Too bad all bills introduced in Congress aren’t this short. Perhaps then members of Congress would actually read them. The “Memorandum Opinion” in question concluded that “interstate transmissions of wire communications that do not relate to a ‘sporting event or contest’ fall outside the reach of the Wire Act.” You can read a legal analysis here. This bill was likewise referred to the Senate Committee on the Judiciary.

But whether these bills pass, are voted on, or even make it out of committee is immaterial. The fact remains that certain members of Congress think it is their duty to keep Americans from gambling; that is, spending their own money as they so choose. 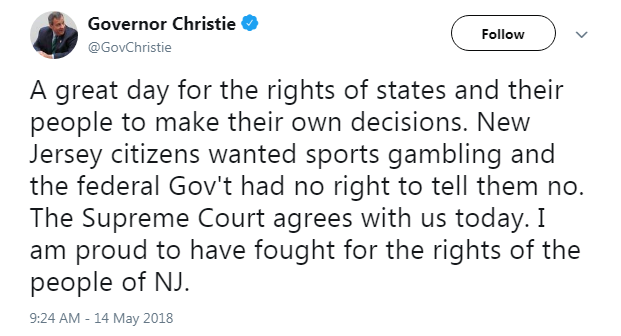 Tho is an assistant editor for the Mises Wire, and can assist with questions from the press.