Healthcare subsidies will get slightly less complicated; unfortunately the market is no freer than before. 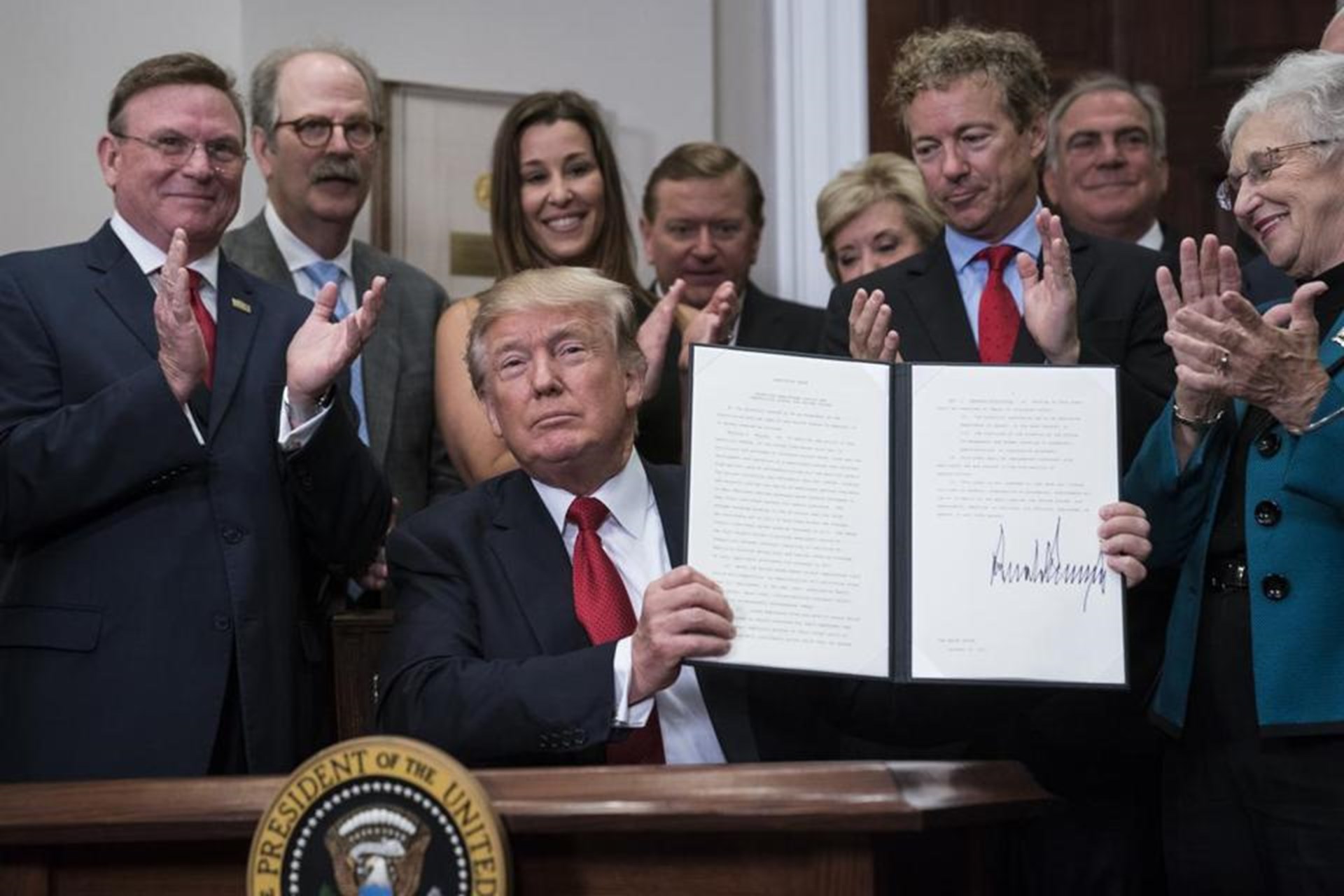 On Friday, President Trump issued a new executive order, and many Democrats and media outlets promptly denounced it. For instance, Yahoo! Finance ran with the subtle title, “Trump’s Obamacare cut is timed for maximum destruction.” Meanwhile, 20 state AGs have taken legal action to try to stop the order from taking effect. All of that was normal.

But things get weird when you understand what the executive order does, and who it actually harms. In fact, Trump’s order is only likely to hurt the health insurance companies, a group that few Americans hold in high regard and one that the political left generally despises with a passion. And yet in this case, whether they know it not, many are rallying against the order, in defense of the health insurance companies’ bottom line.

The executive order in question relates to the so-called cost-sharing reduction (CSR) component of the Affordable Care Act. The CSR provision was designed to do two things.

Insurance companies will still be required to offer the policy upgrades even though they will no longer getting paid to do so.

Trump’s executive order cuts off the government’s side of this deal; the CSR payments will no longer be made. On the face, this would appear to harm the low-income people that previously benefited from the CSR policy upgrades, and this is the angle that most critics have taken.

But there’s a major problem with this explanation. As The Washington Post explains (emphasis added):

Insurers are obligated to provide these discounts for eligible customers, even if the federal government does not fund the CSRs, as they’re called; ending the payments is grounds for any company to back out of its federal contract to sell health plans for 2018.

Trump’s order will have short run and long run consequences.

Yahoo! Finance points out that many of the premium rates and plans for these exchanges have already been approved by the states. Some states allowed insurers to factor in the risk of CSR subsidies being cut off into their rates for this year, so they should be in relatively good shape. However, the other insurance companies now face two unpleasant options in the short run.

The first option for the insurance companies is to simply proceed with the rates they had negotiated and stay in the markets. In this case, insurance company profits from individual exchange policies would suffer due to the lack of CSR payments. But, unless they literally go bankrupt, consumers would not experience any change. CSR upgrades would still be available to the people that had them before.

The second option is to try to renegotiate rates this year to account for the change. However, this would require significant effort and it would risk creating new problems in an enrollment process that has already proven notoriously glitchy. If they succeed, they could improve their bottom line. But if they create severe enrollment issues in the process, it may result in higher losses. The industry experts consulted by Yahoo suggested that some companies won’t be able to renegotiate in time. Additionally, at least one state has ruled out letting insurers re-negotiate for higher rates.

It’s possible that the order will actually expand access to health insurance in the long run for very low-income people.

Another compelling possibility would appear to be withdrawing from the individual exchanges altogether. However, The Washington Post reported that their hands are tied for now. If they were already planning to participate in the exchange markets in a given state until now, this change is not a sufficient pretext to permit them to leave for 2018.

They could still leave before 2019 presumably as a reaction to this change. But by that time, they will have definitely had a chance to raise premiums and will likely be in roughly the same position as before the CSR order.

While it’s unclear in the short run whether many insurers will have the ability to successfully raise premiums, that is the most likely outcome in the long run. The rationale for doing this is straightforward. The net cost of all of their policies has gone up now that the CSR subsidies are cut off. And since they are not allowed to meaningfully tailor rates based on the risk or expense of individual policyholders, the way they make themselves whole is to raise premiums on everyone.

These premium hikes would appear to harm consumers, and they will indeed harm higher income participants in the exchanges. However, the price hikes will have a limited impact on lower income participants because the tax credits are designed to rise with the cost of the plans. Specifically, the amount of the tax credit subsidies for each consumer rise according to the premiums on the benchmark silver level plans available in their locale. So, as insurance companies raise premiums to compensate for the lack of CSR payments, the tax credit subsidies rise as well to defray the cost. This minimizes the possible harm to low-income individuals from the change, even in the long run.

In fact, it’s possible that the order will actually expand access to health insurance in the long run for very low-income people. This result stems from the fact that the subsidies are pegged to grow based on the premiums of the silver level plans, the second cheapest tier of insurance policies. However, even cheaper bronze level plans also exist.

This result is markedly different from the way the order has been reported.

This means that the subsidy amounts will likely rise faster than the premiums of the cheapest plans – causing the net out-of-pocket cost for the bronze plans to actually fall. In this way, Trump’s order may have the net effect of actually expanding access to health insurance in the long run for low-income individuals participating in the exchanges.

This result is markedly different from the way the order has been reported, but it follows logically from the structure of the Affordable Care Act subsidies.

In the end, there are actually only two groups harmed by the policy in the long run. The first group is the higher income participants in the exchanges. They will now face higher premiums but will not be eligible for any subsidies. The second group injured is the taxpayers – but they are only worse off to the extent that the change leads more people to purchase insurance and receive subsidies than before. Needless to say, these aren’t groups that usually receive much sympathy from Democrats in the healthcare debate.

After going through this analysis, it’s clear that the actual effects of the executive order will be rather different than the way it’s being portrayed. In the short run, the most likely casualty of the policy is the insurance companies’ profits, while consumers will be largely (or entirely) unaffected. And in the long run, insurance companies make themselves whole at the expense of higher income participants while low-income participants are still left intact, or may even benefit from higher subsidies. And yet, these outcomes led many left-leaning politicians and pundits to cry bloody murder because Trump was the one who signed the order.

We need to evaluate policies based on their actual effects, not the benevolent or malevolent intentions we assign to their sponsors.

Of course, there’s no particular reason to believe Trump or his team understood these nuances when implementing the policy. They may really believe that they are sabotaging Obamacare with this move. Nevertheless, this case demonstrates that we need to evaluate policies based on their actual effects, not the benevolent or malevolent intentions we assign to their sponsors.

Contrary to the prevailing rhetoric, the “victim” of Trump’s order is not low-income people; they may actually benefit in a small way. It’s the insurance companies that are likely to take a hit in the short run. Then high-income individuals get stuck with the burden long term.

From a libertarian perspective, the whole matter largely comes out as a wash. Healthcare subsidies will get slightly less complicated, but the market is no freer than before. Still, it’s remarkable just how badly this change is being represented.

And as the Senate apparently makes a last-ditch attempt at undoing the order before the enrollment period begins, it’s worth understanding who they are trying to protect. Hint: It’s not the little guy.

*Hat tip to Peter Suderman at Reason for first calling attention to the possible result that low-income people might actually benefit from the order long term.