Obamacare and Dodd-Frank Have the Same Fatal Flaw

The current partisan war over the Dodd-Frank Act is just one dispute in a broader ideological divide about the government’s role in industry. This dispute, which has deep historical roots, includes a similar battle over Obamacare. The common disagreement at issue with both laws — now in the cross hairs of a GOP-controlled Washington — is the extent to which politicians should subsidize their constituents indirectly through regulation of private companies.

The Affordable Care Act governing health insurers was about 1,000 pages, and Dodd-Frank governing most other financial institutions was more than twice that. Both stopped short of nationalizing their respective industry, instead generating more than 10 pages of regulation for every one page of legislation, although many view nationalization as an eventual but inevitable consequence, particularly for health care.

The distinction between public control and public ownership is the primary distinction between the competing mid-20th-century ideologies of fascism and communism. In contemporary terminology, this distinction is between crony capitalism and nationalization, neither of which can be reconciled with competition and freedom of choice. 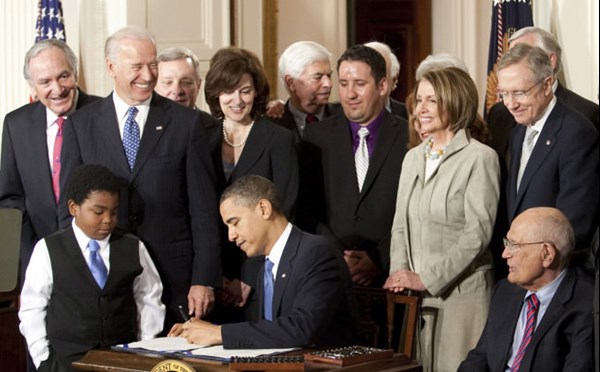 The Affordable Care Act, signed into law March 2010, along with Dodd-Frank are examples of how the government subsidizes consumers through regulation to the detriment of market choice and competition. Bloomberg News

The serious threats to market competition in the U.S. came well after World War II. In the 1960s, the U.S. had the most competitive financial system globally, a higher rate of homeownership than at present and the best medical care. National health insurance was a high school debating topic, implemented by many western democracies in the wake of the devastation of World War II. Many nations also nationalized other industries.

But the U.S. took a different approach, attempting to maintain the benefits of private ownership and competition. Most consumer-oriented firms — savings and loans, health and life insurers — were mutually owned, eliminating conflicts among stakeholders. Commercial bank shareholders and management were restrained by competition and market discipline. Health and homeowner subsidies were provided directly to the needy.

The first major exception was the introduction of federal deposit insurance to protect “small savers” during the Great Depression, requiring sufficiently prudential regulation to prevent moral hazard, i.e., excessive risk-taking. But public insurance schemes fail (as all state deposit insurance systems have failed) where private schemes succeed because politicians sometimes excessively favor constituent customers, e.g., savers, borrowers or the insured, over shareholders or taxpayers. There are only a few ways financial institutions can respond to policies favoring politically designated customers. First, those with monopoly power can cross-subsidize — charge some borrowers more to cover the added costs of favoring others. Second, they can take on more risk in the hope of greater returns.

Crony capitalism is worse than budgeted subsidies because it massively undermines market competition and freedom of choice.

These perverse incentives saw their heyday in the 1990s and leading up to the financial crisis.

Under the Clinton administration, the 1995 National Homeownership Strategy promised homeownership to millions of households that had neither the traditional down payment nor sources of sufficient income, without budgeting explicit subsidies. But the subsidies were there. The costs of lower interest rates were offset by employing extreme leverage facilitated by deposit insurance — thereby increasing public risk in the interest of private profit for money-center banks — and by the implicit government backing of Fannie Mae and Freddie Mac.

At the peak of this policy’s effect, the combined unbudgeted tax and insurance subsidies for the insured banks were in the tens of billions of dollars annually (and the same for Fannie and Freddie). This and other policies like it were guaranteed to fail, requiring a bailout.

Obamacare took a similar view of the role of government subsidies. The ACA promised to maintain or improve health care while making coverage universal. Past political attempts to do this had always failed due to the expense and “moral hazard” of people taking greater health and/or financial risks. The ACA ignored or glossed over these concerns, mandating participation at multiples of a competitive market premium to generate sufficient cross subsidies and expensive coverage not paid for by the beneficiaries by fixing prices across all risk classes.

Authors of the law simultaneously avoided the major source of increasing costs by deferring reform of medical malpractice torts, saying it was politically unpalatable. Knowing in advance that premiums would skyrocket after enactment of the law, the law’s proponents incorporated a bailout scheme into the ACA. The big health insurers became essentially “too big to fail” or dropped out of the system. Most of the smaller nonprofit insurers failed.

To be clear, this is not “free” national health insurance, which would obviously lead to huge taxpayer expense for what would be a lower-quality product. But the alternative of crony capitalism is worse than budgeted subsidies because it massively undermines market competition and freedom of choice while imposing greater costs on the public.

The solutions for health insurance and financial services are the same: either bite the bullet and nationalize, or restore competitive markets. Democrats tried to get the former for health insurance, but failed. Meanwhile, commercial banks were temporarily “nationalized” — forced to issue shares to the government during the crisis.

Well before Dodd-Frank, there are plenty of examples of past banking reform efforts that resulted in horrible incentives.

The 1989 Financial Institutions Reform, Recovery and Enforcement Act promised to end the systemic (political) risk of mortgage lending, but exacerbated it by bringing the banking and mortgage lending systems closer together.

The history of government-subsidized health care and financial “reform” efforts provide a lesson on what policymakers should avoid.

The 1994 Riegle-Neal Act allowed banks to branch and merge across state lines. But by limiting interstate approval to banks with high Community Reinvestment Act ratings, the law indirectly induced commercial banks to allocate more credit; making more loans was a road map to branching out across state lines. Public disclosure of CRA ratings empowered community action groups to extract $4 trillion in commitments. Fannie and Freddie’s regulator issued a directive to the same end. Underwriting guidelines and down payment requirements were weakened.

The Gramm-Leach-Bliley Act of 1999 that repealed the Depression-era Glass-Steagall Act separating commercial from investment banking should have strengthened TBTF banks. But by then all the conservative investment banking partnerships had been converted to corporate casinos gambling for their own account. The riskiest tranches of mortgage securities were their most speculative bet.

Sufficiently high capital requirements would have prevented a bubble from developing, but the congressional committees responsible for the safety of the financial system rejected higher capital requirements explicitly to help homeowners. When the resulting bubble was finally burst in 2008, the deferred default costs caused a global financial crisis and recession. After millions of households suffered foreclosure, the U.S. homeownership rate has returned to the level prior to the Clinton housing initiative, but the financial system and economic recovery remain fragile.

Indeed, Dodd-Frank has been a continuance of this faulty reasoning. With more government control over private-company decisions, the economic recovery has been the weakest on record, and even many Democrats agree that insufficient lending to small and medium enterprises — the bread and butter of smaller banks — continues to be a major drag. The effects of the Consumer Financial Protection Bureau, created by Dodd-Frank, have been to drive mortgage lending and other lines of business to government-sponsored lenders and big banks that can afford the compliance burden.

What should a Dodd-Frank repeal-and-replace effort include? First and foremost, capital requirements should be sufficiently high and immutable. Second, TBTF firms should lose their subsidies. Third, the prohibitions on the Federal Reserve bailouts of insolvent firms should be strengthened and enforced. Fourth, no prudential regulator should have conflicting social objectives. Fifth, the FDIC as insurer should be the primary regulator for all insured institutions and held accountable for protecting its insurance fund. Sixth, proprietary trading and other games of chance should remain in private casinos, not universal TBTF banks.

The history of government-subsidized health care and financial “reform” efforts provide a lesson on what policymakers should avoid. Hopefully, the Republicans will take heed and restore market competition in the financial services and health insurance industries.