File this one under the explanatory power of public choice theory. 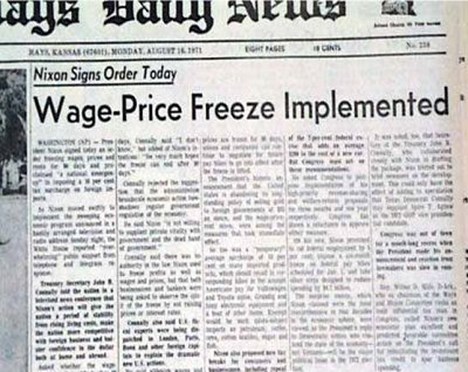 A new paper in Public Choice shows that President Richard Nixon understood the costs of wage and price controls, but implemented them to secure his re-election in 1972. Here is the abstract:

In late July, 1971, Nixon reiterated his adamant opposition to wage and price controls calling them a scheme to socialize America. Yet, less than a month later, in a stunning reversal, he imposed the first and only peacetime wage and price controls in U.S. history. The Nixon tapes, personal tape recordings made during the presidency of Richard Nixon, provide a unique body of evidence to investigate the motivations for Nixon's stunning reversal. We uncover and report in this paper evidence that Nixon manipulated his New Economic Policy to help secure his reelection victory in 1972. He became convinced that wage and price controls were necessary to grab the headlines away from the defeatist abandonment of the Bretton Woods Agreement and the closing of the U.S. gold window. Nixon understood the impact of his wage and price controls, but chose to trade off longer term economic costs to the economy for his own short-term political gain.

The paper reproduces evidence from the Nixon tapes that reveal the private conversations and motivations behind the implementation of the NEP. Here are a few choice quotes from President Nixon and Treasury Secretary John Connally:

Nixon [February 22, 1971]: ''Here's my concern about the freeze...There is strong support for a wage board and wage-price controls and particularly from sources like Arthur Burns. ... The difficulty with wage-price controls and a wage board as you well know is that the God damned things will not work. They didn't work even at the end of World War II. They will never work in peacetime.''

Nixon [July 24, 1971] refers to a program proposed by Connally and states that he wants to emphasize ''making America competitive again.''

Connally [August 12, 1971]: ''To the average person in this country this wage and price freeze--to him means you mean business. You're gonna stop this inflation. You're gonna try to get control of this economy. ...If you take all of these actions...you're not going to have anybody...left out to be critical of you.''

While Nixon was initially reluctant to accept the wage and price freeze, he soon turned into an enthusiastic supporter: ''As a matter of fact, I'd like the freeze on right through the election.'' He worried that the goal of a 2-3 % inflation rate by the end of 1972 would not be achieved, but the design for the program was such that Nixon could plausibly deny responsibility for any failure.

The paper clearly shows that it was political motives of re-election that drove Nixon's decision to implement policy that was known to be extremely costly to the economy. File this one under the explanatory power of public choice. Self-interest is often a powerful motive for political actors (for more, see Bruce Bueno do Mesquita's EconTalk on a revisionist perspective of US presidencies).

An ungated version of the paper is available here.