Traditional theories of political business cycles — Nordhaus (1975), MacRae (1977), Persson and Tabellini (1990) — predict monetary expansions in the run up to an election. Stimulating the economy, they argue, can help the incumbent politicians win elections. These theories suggest that the growth in M1 is a result of deliberate manipulation of the money supply leading up to the election as a means of gaining support.

But what if that isn't the story in countries with weak institutions? What if the increase in the monetary aggregate occurs actually as a by-product of outright vote buying, which happens concurrent with the election because of increased cash demand? This is the hypothesis for democracies outside the OECD put forward by Toke Aidt, Zareh Asatryan, Lusine Badalyan, and Friedrich Heinemann in a recent working paper.

The paper looks at month-to-month fluctuations in the growth rate of M1 in 85 low and middle-income democracies. The evidence shows a sizeable increase in the growth rate of M1 in election months. Their mechanism to explain this is vote buying in machine politics, where vote buying means outright payments or gifts in exchange for voting in a particular way or for showing up to vote.

The idea is that vote buying requires significant amounts of cash to be disbursed right before the election is held. This increases the demand for liquidity and affects M1 in several ways.

First, resources to buy votes could come from converting illiquid assets into cash. This substitution from broad money into cash or deposits directly increases M1. Second, vote-buying funds may come from the shadow economy. Once this is used to buy votes, a fraction of it ends up in bank deposits. Third, incumbent governments may simply run the printing press. Each of these would result in a spike in M1 very close to the election date.

What they find is that systematic, large-scale vote buying has short-run effects on aggregate measures of the money supply. But to be an effective electoral strategy, vote buying requires weak democratic institutions, poorly monitored elections, and an electorate willing to "sell" their votes. Their pattern of evidence supports this, finding no effect of this mechanism in established OECD democracies.

Aidt et al triangulate their results with survey and case study analysis. Here is an example of how their findings map with Armenia's 2012 elections:

Armenia — a small landlocked country in the South-Caucasus — has held its last two national elections in a relatively peaceful and non-violent environment. The 2012 Human Rights report of the United States Department of State citing the election observation report of the Organization for Security and Cooperation in Europe, describes the 2012 parliamentary election held on the 6th of May as "competitive',' but with significant violations, such as "credible allegations of vote buying" among others.

International media does not report much on the small country, but local media are full of allegations of vote buying, typically amounting to 5,000 or 10,000 AMD per vote (about 10-20 USD) and said to reach several hundred thousand voters in a country with a population of less than 3 million.

Unlike most other central banks, the Central Bank of Armenia reports monetary statistics on a daily basis and the pattern observed in [below] is striking. 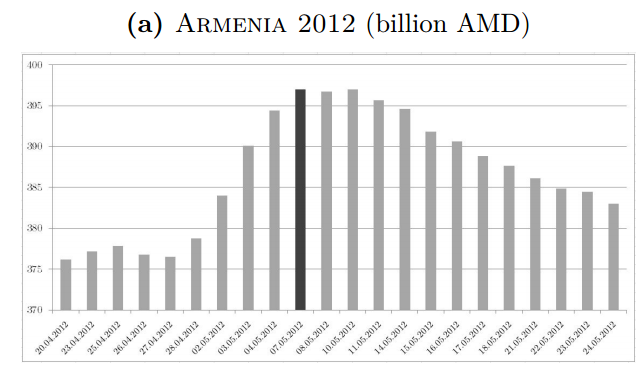 The cash in the Armenian economy increased by 20 billion AMD (or by over 5%) in less than 10 days preceding the elections. This spike is concentrated very close to the election day, reaching its peak on the first working day after the election weekend and gradually declining during the following weeks.

The 2007 presidential election marked the first transition from one elected leader to another in the largest country in Africa. Many observers have noted that vote buying, along with electoral violence and fixes to falsify vote tallies, were common currency in this and other Nigerian elections (Lucky 2013; Collier and Vicente 2014).

In an Afro-barometer survey undertaken half-way through the election campaign, 12% of the interviewed acknowledged that they had been offered something in return for their vote (Bratton 2008, p. 623). As one might expect in an economy awash with oil money, voters are usually offered money in exchange for their vote but gifts such as food or clothing are also common.

The going price for a vote in 2003 and 2007 was around 500 naira or about 4 USD. 10 Figure [below] shows how M1 evolved before and after the elections held in April 2007. We observe a clear increase in March with a peak in April. After the election, M1 falls back to its normal level. 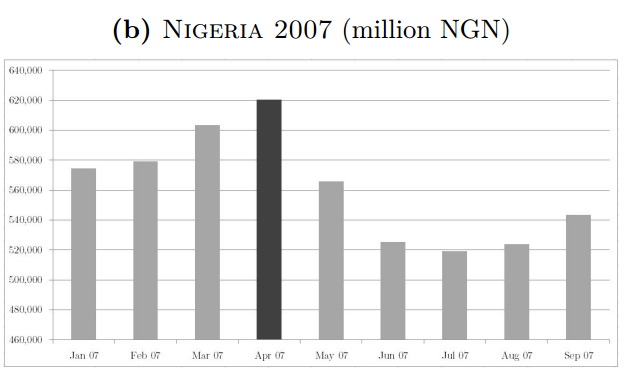 I find the paper a compelling way of opening up the discussion of electoral corruption, vote-buying, and political business cycles more generally. It raises questions regarding the general operation of political vote buying rings, their variation across time and space, and the challenges this particular kind of corruption poses for the rule of law.