What a perfect example of Hayekian codes of conduct, adopted but never imposed. 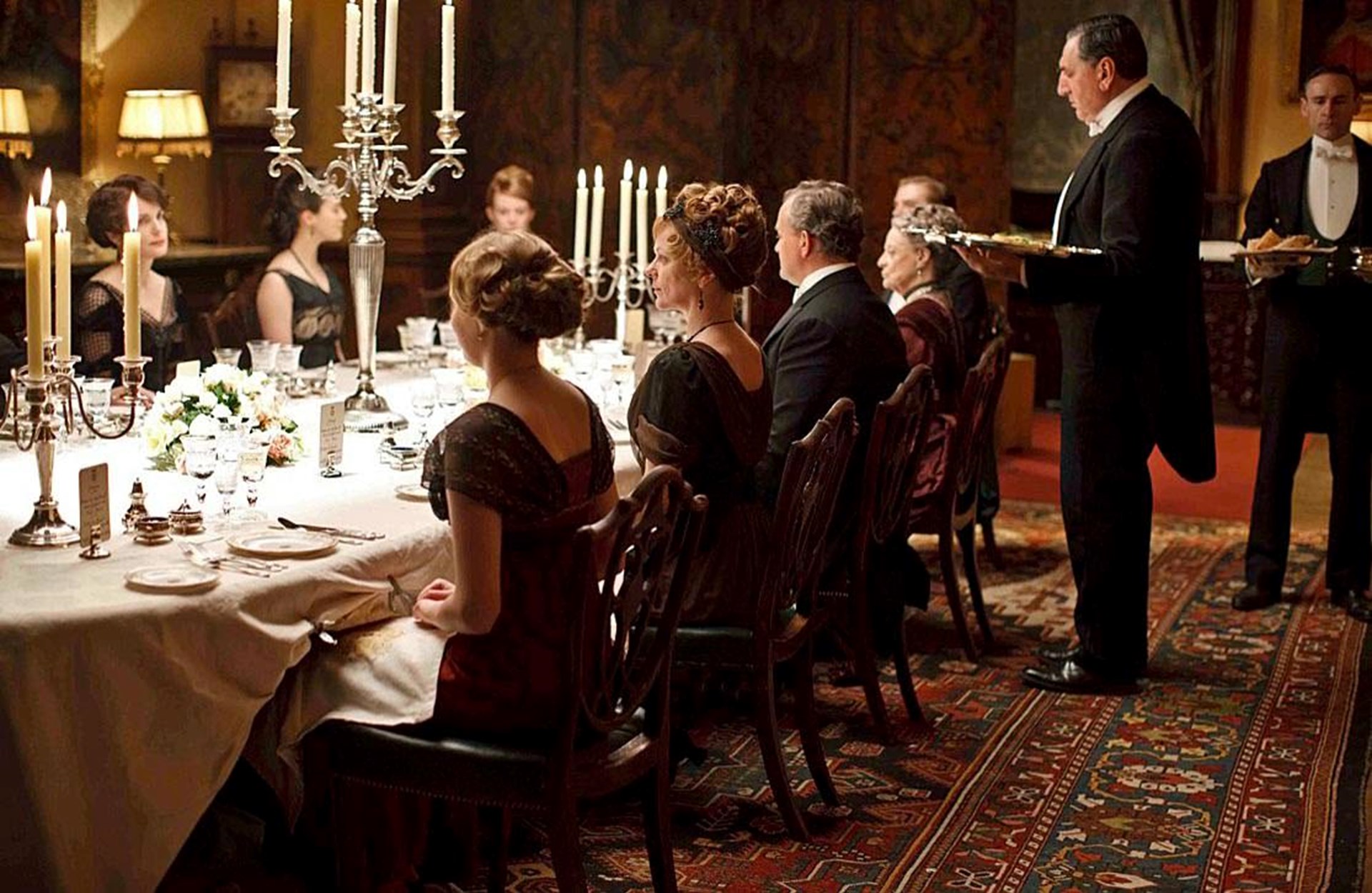 There was a strange moment in the second debate when a question was posed to both candidates. Donald Trump deferred to Hillary Clinton for the answer because, he said, “I am a gentlemen.”

Sure, he might have spoken ironically or even facetiously (really Donald?), but most people had a vague sense of what he meant. His quick retort tapped into a deep cultural trope, one that is entirely worthy of defense: there is a proper ordering of precedence in conversation and we are right to comply with it. We defer to each other based on non-legislated rules. It's not a law. It is a voluntary commitment we make, in the name of bringing elegance and a humane spirit to our social engagements.

In other words, manners matter.

The Ceremony of the Office Lunch

Without manners, there would prevail the chaos and anomie of hurt feelings, bruised egos, misunderstandings, resentful recriminations, and a total sense of disorientation.I just returned from a lunch with a group. Because this subject was on my mind, I tried to deconstruct the unstated rules people followed, observing all the ways in which manners guided diners’ actions. It influenced how we crossed the street and who went first, how we opened the restaurant door, who sat down and where, who ordered first and for whom, whether people had a drink or not, how much of the appetizer one person ate in order to save enough for the other one, and of course posture, technique with the fork, when and how people spoke and for how long, and so on.

So many contingencies! Millions! And yet from it all we experienced order: a lovely scene created entirely out of unorchestrated micro-choices over everything we do. As I looked at the entire scene from the vantage point of informal rules, I was struck by what a vast apparatus of cultural signaling we comply with during something as simple and seemingly uneventful as an office lunch. Without manners, there would prevail the chaos and anomie of hurt feelings, bruised egos, misunderstandings, resentful recriminations, and a total sense of disorientation.

A way to understand manners is by an analogy with the complexities and indispensability of markets themselves. They are emergent and not planned from above, evolving and not immutable, contingent on time and place and not the products of rational construction, approximate based on social performance and not axiomatic. They grow from human volition, not force. They operate as signaling systems to help us more successfully navigate our way out of the state of nature. And without them, the world would be a complete and chaotic mess.

Truly, people are right to concern themselves with manners. It is something we can actually control about our own lives – participating of our own free will. We can consult books (they exist, however imperfectly they render the rules). We can learn from watching others who display elegance in action. We can look for ways to upgrade our own behavior. And why do we do this? It is in our own interest, but it is also about lifting up the experiences of others around us, making sure that everyone feels as valued as possible.

Indeed, there is far too little concern for manners in our world, given how intensely they affect the daily experience of life. Actually, people often write me (for whatever reason) with questions about manners and etiquette. I just fielded an email from a person who wondered whether he should always allow the boss to pick up the lunch check or whether he should offer to pay. I said he should absolutely offer to pay, with the firm intention to follow through if the boss agrees. Regardless, caring about such issues of social protocol and form are wonderful steps toward a more civilized world.

There is some evidence of widespread concern that manners are desperately in need of some renewed attention. A recent survey by the Center for Public Affairs Research documents that 74% of Americans are concerned by the decline in civility, meaning primarily manners, in our daily lives. Certainly politics has contributed to this compare the horrid behavior of people at political rallies with the normalcy we expect to encounter at the mall or in a house of worship. It seems to be the case that politics is dragging us down, coarsening life and culture.

Many political feuds would be better resolved through matters better resolved through firmer social codes rather than some kind of revolutionary ideological upheaval.Certainly this season seems to have occasioned an epic plunge in manners, and kicked off an intense discussion about the intersection of manners and morality. One male candidate is said to have spoken and behaved in a brutish way toward women, while a female is said to have been complicit in covering up her husband’s behavior along the same lines. What is seemly or unseemly, what is tolerably rakish or intolerably imposing, and what should others around them put up with when the code of decorum between the sexes are breached?

And think of how many other political squabbles are not really about policy but manners. When the archetype of the “angry feminist” complains of ubiquitous “mansplaining” and “manspreading,” perhaps she is not really calling for the death of patriarchy but merely asking for the restoration of old-world courtesies. Indeed, many demands of political activists strike me this way: matters better resolved through firmer social codes rather than some kind of revolutionary ideological upheaval.

I recall being bowled over by a statement once made by Albert Jay Nock, the aristocratic anarchist who exercised such a powerful influence over so many conservative and libertarian thinkers in the postwar period. He was discussing the structure of the free society, and, in passing, said that one of its features is that the law should matter far less than the “court of taste and manners.” That has always struck me as a wonderful vision of anarchy: not a world without rules but a world in which time-tested modes of behavior are far more decisive for the structure of our daily lives than any legislation imposed from above.

Manners are a fantastic example of what Hayek called a spontaneous order.

This is why I was thrilled to read Henry Hazlitt’s reflection on manners and why they matter, as published by FEE. Their presence, as Hazlitt says, ennobles life and bring an elegance and decorum to our engagements with others. They emerge with the goal of making social contact smoother – ”a dance, not a series of bumps and jolts.”

Without them, life would be barren, graceless, and brutish. He too says that they are more important to the quality of life we experience than laws themselves. More adaptable and subtle than moral systems, they are still a reflection of what is right and wrong. And they emerge from real experience, perpetuating themselves through tradition and voluntary acquiescence, not imposed by stone tablets, great leaders, or legislators, not enforced by police.

Manners are a fantastic example of what Hayek called a spontaneous order. While some degree of codification is possible once they are entrenched in our lives, they cannot really be designed beforehand, much less imposed from the top down.

Where They Thrive, When They Die

When we think about the highest and most well-developed social situation in which codes of etiquette and manners prevail more than law, we probably imagine something like Downton Abbey, the novels of Oscar Wilde, perhaps the remaining vestiges of aristocracy in Remains of the Day or Brideshead Revisited.

This is for a reason. A social order shaped by such codes reached its apogee around the turn of the century in England and the US, and were the products of a world without total war, mass economic upheaval, or the advent of the total state. In other words, a world governed primarily by manners was the product of freedom itself, and that world was tested and often shattered by the government-caused upheavals of the 20th century.

My own theory is that the digital world is too new to have formed consistent norms of engagement.When government can intern people and slaughter hundreds of thousands with aerial bombings, one can understand an emerging doubt whether doffing hats and opening doors really matters that much. Just as free markets took a hard hit in the course of the 20th century, manners did too.

(If it is true that freedom breeds manners, why do we encounter such stunning brutality, rudeness, shaming, and viciousness in social spaces on the Internet? My own theory is that the digital world is too new to have formed consistent norms of engagement and effective methods for rebuking and shunning malefactors. As time goes on, and so long as people retain the freedom to speak and create, this will improve on the Internet in the same way it did in the course of the age of laissez faire.)

The problem here is not that we don’t care about manners anymore. In fact, we do. Intensely. The problem is that we no longer seem to have an agreed-upon template for how people should engage each other. What is courtesy and what are its signs? What constitutes an egregious violation of personal space as versus a mischievous overture of sexual interest? We are all pretty sure that force is never permitted. But that leaves plenty of gray areas remaining to debate.

Manners arise from a desire to behave in ways that bring the highest sense of delight to a social setting.And keep in mind that this isn’t really about what government should or should not do; this is about what our behavior towards others says about our character and a person’s trustworthiness, especially as regards those we choose to call leaders. In other words, the subject of manners is playing a decisive role in a momentous political decision.

There is some interesting comfort we can take from this development. No matter how much the state and its political apparatus have crowded out and interfered with the natural evolution of life, no matter how much we have transferred the juridical function of society from the “court of taste and manners” to coercive courts and police, and no matter how much we have tolerated large and imposing states that do to us what we would never consider doing to each other, the codes of conduct that really drive our sense of the worthiness to hold public office come down to something much more simple: those informal codes called manners.

This makes sense. Manners, like markets, arise from a desire to behave in ways that bring the highest value to a social setting and to treat others with as much deserving dignity as we can convey in our words and actions. If we expect this of ourselves, we should also expect this from those who purport to lead us.

“I’m a Gentleman” is a much better leadership slogan than “Make America Great Again.”