If Cosmetic Surgery Has a Working Market, Why Can’t Medical Care?

Here's a clue: it's about third-party payers

Between 1998 and 2016 prices for “Medical Care Services” in the US (as measured by the BLS’s  CPI for Medical Care Services) more than doubled (+100.5% increase) while the prices for “Hospital and Related Services” nearly tripled (+177% increase). Those increases in the costs of medical-related services compare to only a 47.2% increase in consumer prices in general over that period. On an annual basis, the cost of medical care services in the US have increased almost 4% per year since 1998 and the cost of hospital services increased annually by 5.8%.

In contrast, overall inflation averaged only 2.2% per year over that period. The only consumer product or service that has increased more than medical care services and about the same as hospital costs over the last several decades is college tuition and fees, which have increased nearly 6% annually since 1998 for public universities. 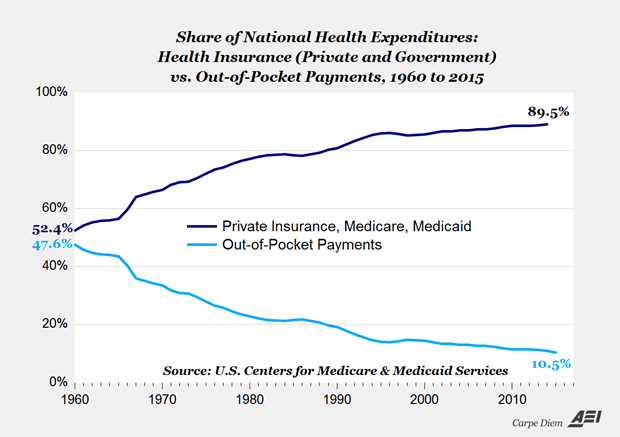 One of the reasons that the costs of medical care services in the US have increased more than twice as much as general consumer prices since 1998 is that a large and increasing share of medical costs are paid by third parties (private health insurance, Medicare, Medicaid, Department of Veterans Affairs, etc.) and only a small and shrinking percentage of health care costs are paid out-of-pocket by consumers.

It’s no big surprise that overall health care costs have continued to rise over time as the share of third-party payments has risen to almost 90% and the out-of-pocket share approaches 10%. Consumers of health care have significantly reduced incentives to monitor prices and be cost-conscious buyers of medical and hospital services when they pay only about 10% themselves, and the incentives of medical care providers to hold costs down are greatly reduced knowing that their customers aren’t paying out of pocket and aren’t price sensitive.

How would the market for medical services operate differently if prices were transparent and consumers were paying out-of-pocket for medical procedures in a competitive market? Well, we can look to the $15 billion US market for elective cosmetic surgery for some answers.

In every year since 1997, the American Society for Aesthetic Plastic Surgery has issued an annual report on cosmetic procedures in the US, both surgical and nonsurgical, that includes the number of procedures, the average cost per procedure (starting in 1998), the total spending per procedure, and the age and gender distribution for each procedure and for all procedures. Here is a link to the press release for the 2016 report, and the full report is available here. 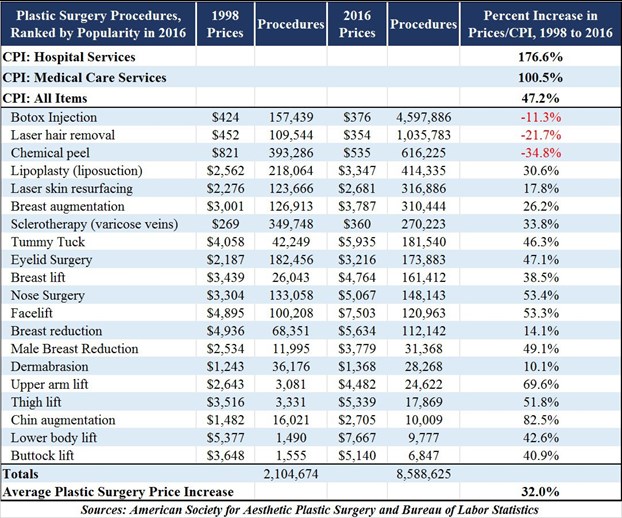 Here are some interesting findings from this year’s report and the table above:

1. For the top ten most popular cosmetic procedures displayed above for last year, none of them has increased in price since 1998 more than the 47.2% increase in overall consumer prices, meaning that the real, inflation-adjusted price of all ten of those procedures has fallen over the last 18 years.

2. For the three most popular procedures in 2016 (botox, laser hair removal, and chemical peel – all nonsurgical cosmetic procedures), the nominal price for each has actually fallen since 1998 by large double-digit percentage declines of -11.3%, -21.7% and -34.8% respectively.

Patients that pay out-of-pocket are cost-conscious and have strong incentives to shop around and compare prices.

3. The two most popular surgical cosmetic procedures last year were liposuction and breast augmentation, which have increased in current dollar prices by 30.6% and 26.2% respectively since 1998. Both of those average price increases were less than the 47.2% increase in consumer prices over the last 18 years, meaning that the real, inflation-adjusted prices for liposuction and breast augmentation procedures have fallen since 1998.

The Role of Insurance

The competitive market for cosmetic procedures operates differently than the traditional market for health care in important and significant ways. Cosmetic procedures, unlike most medical services, are not usually covered by insurance. Patients paying 100% out-of-pocket for elective cosmetic procedures are cost-conscious and have strong incentives to shop around and compare prices at the dozens of competing providers in any large city.

The greater the degree of market competition, price transparency, and out-of-pocket payments, the more contained prices are, in health care or any other sector.

In all cases, cosmetic procedures have increased in price by far less than the 100.5% increase in the price of medical care services between 1998 and 2016 and the 176.6% increase in hospital services. In summary, the market for cosmetic surgery operates like other competitive markets with the same expected results: falling real prices over time for many cosmetic procedures.

If cosmetic procedures were covered by third-party payers like insurance companies, Medicare, and Medicaid, what would have happened to their prices over time? Basic economics tell us that those prices would have most likely risen at about the same 100.5% increase in the prices of medical services in general between 1998 and 2016.