In 17 of 19 States Surveyed, A Majority of GOP Voters Support Legal Status

With Donald Trump leading the GOP presidential race, it would be natural to get  the impression that Republican voters appreciate his deport-them-all policy proposal for illegal immigration.

Yet even after his big wins last week, a majority of Republicans remain skeptical of his first policy suggestion, telling pollsters on their way out of the voting booth, as they have for months, that they want the immigrants to stay.

CNN has conducted exit polls in 19 of the 40 states that have held primaries so far in which it has asked voters whether “illegal immigrants working in the U.S. should be offered legal status or deported to their home country.” In 90 percent of those states, Republicans told the pollsters that they favored “legal status” over “deportation.”

Support for legal status across 19 states, which include major primary states like New York, Florida, Pennsylvania, and Texas, averages 53 percent compared to 41 percent for deportation. This confirms Pew and Wall Street Journal polls from last year, showing that a majority of Republican voters nationally believe that immigrants should continue living in the United States without fear of deportation. 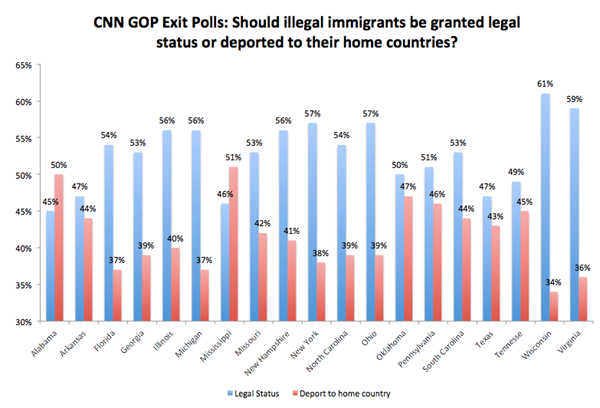 Only two states — Mississippi and Alabama — have dissented, not exactly pivotal states in either the primary or the general election. On the other hand, in big swing states Florida, Ohio, and Michigan, Republican voters favored legal status over deportation by wide margins of 17, 18, and 19 percent respectively.

Perhaps it could be argued that the 41 percent is determining the direction of the primary because they care so deeply about the issue. To some extent, this is undoubtedly true. But candidates are likely overestimating even the depth of the opposition. CNN polls find that when given the choice of just four issues to pick, 90 percent of Republicans in these states pick issues other than immigration as their top priority, and a portion of these have been voting for John Kasich, Jeb Bush, and Marco Rubio — candidates who have endorsed legal status.

If Donald Trump becomes the nominee, does any of this matter? Of course it does. It demonstrates to Senate and House candidates that their voters are not where Trump and Cruz are on immigration, that they can support reforms with the backing of a majority of their voters.

Moreover, no matter what happens in the rest of the primary, the party should recognize that their base wants a general election platform that reflects their values. Those values include a desire to allow unauthorized immigrants to remain lawfully in the United States. In structuring an immigration plank for 2016, the party should include supporting legal status, not deportation or “self-deportation,” regardless of who its nominee is.

Republicans want immigration reform to include legalization for unauthorized immigrants. It is time for the party’s representatives to follow where their voters have already gone.