Policy and politics should be focused on making sure more people can participate more fully in an innovative, market-driven American capitalism that continues to push forward the technological frontier.

Today’s populists overindulge in unwarranted economic nostalgia. For them, the immediate postwar decades were when America was really great. But maybe it’s a more recent period that they should be pining for. If you’re trying to make the case that “capitalism is broken,” then the Great Recession of 2007-2009 was your big moment. Capitalism seemed shattered, not just broken. It looked like this sucker was going down, to paraphrase President George W. Bush.

But then the economy started to recover, slowly but steadily. Indeed, the US expansion hit the 10-year mark this month and is on the verge of its longest run on record if things stay on track through July. An economy that’s producing gobs of jobs every month—a total of 20 million since 2010—as it grows year after year is a dodgy example of broken capitalism.

Just how dodgy an example is made crystal clear in a recent column by my AEI colleague Michael Strain, in which he notes a) the jobless rate is the lowest since 1969, b) wages are growing at faster than 3 percent for the typical workers (with wage growth strongest for those at the bottom), c) there are more job openings than unemployed workers, d) the prime-age participation rate has been rising since July 2015, erasing half the decline over the previous decade.

Stagnation never looked so, well, growthy. And that’s true even if you view things over the longer run. Typical worker wages have risen by a third over the past three decades, adjusted for inflation (specifically the Fed-favored PCE inflation measure, which takes into account how consumer behavior responds to price changes). And median household income? It’s up by 43 percent (after taxes and transfers, and adjusted for inflation). But the good news doesn’t stop there. The income inequality gap has stabilized since 2007 (or narrowed by 5 percent if you factor in government transfer payments and federal taxes). The story of the American economy for the past generation, Strain writes, “has been for jobs to be available for those who want them, for consumers to enjoy more and better goods and services, for quality of life to improve, and for capitalism to help push the poverty rate down.”

Does this chart illustrate an American capitalism—defined as “a political economy in which regulated markets create wealth and prosperity, some of which is redistributed or spent by government to ensure socially desirable outcomes, with those outcomes defined through politics”—that’s broken or one that’s imperfect and facing challenges, but fundamentally sound? 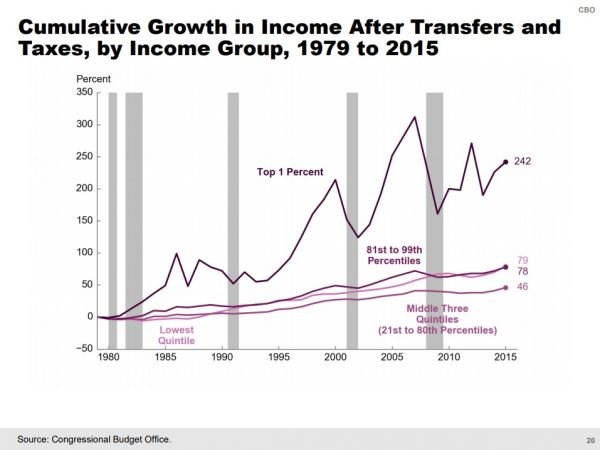 Spoiler: It’s the latter. Policy and politics should be focused on making sure more people can participate more fully in an innovative, market-driven American capitalism that continues to push forward the technological frontier.

Update: This post has been updated to reflect the fact that the income inequality gap has also stabilized since the Great Recession.