The trade war is costing American households nearly $1000 each on average, according to the New York Fed.

Initially, it seemed all about the bilateral trade deficit that the US runs with China. China needed to buy more US stuff, according to President Trump. But China also needed to stop swiping our intellectual property and tech. Some China hawks, however, are more ambitious. They see the trade conflict as the start of the economic rupture of “Chimerica,” including the separation of our respective tech ecosystems, leading to Cold War 2.0. Killing Chinese telecom giant Huawei is key to that strategy.

The trade war is costing American households a considerable chunk of change, nearly $1000 each on average, according to the New York Fed.

Yet Trump now says that although the trade restrictions were placed on Huawei because the company is a security threat, those restrictions could be lifted as part of a trade deal. Which makes no sense. A trade deal wouldn’t change China’s political system and its ability to influence Chinese companies.

So what about the trade war can we be certain about? Maybe this: It’s costing American households a considerable chunk of change, nearly $1000 each on average, according to the New York Fed. First, US purchasers of $200 billion of Chinese exports to America have to pay the tariff-tax of 25 percent, up from ten percent. Then there’s the tariff-induced change in supply chains—and accompanying efficiency loss—as some firms switch their sourcing of products to other countries.

As the NY Fed calculates things, last year’s ten percent tariffs imposed an annual cost of $419 for the typical household—the added tax burden plus the deadweight/efficiency loss. Not surprisingly, those costs increase as the tariffs increase by 15 percentage points. But here’s what’s interesting: The tariff-tax portion of the cost (revenue to the government) falls

as buyers of imports stop purchasing imports from a targeted country and seek out imports from (less efficient) producers in other countries.

It’s called “expenditure switching,” and even as the tariff-tax revenue declines, the deadweight losses to households mount. 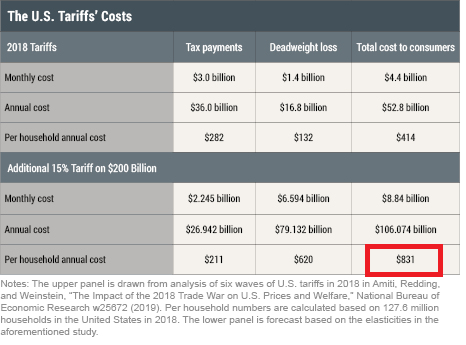 As a result of this expenditure switching, we estimate that the annualized deadweight loss increases from $132 to $620 per household, bringing the total annual cost of the new round of tariffs to the typical household to $831. In sum, according to our estimates, these higher tariffs are likely to create large economic distortions and reduce U.S. tariff revenues.

And don’t forget, as the Tax Foundation points out,