Photo by Anaya Katlego on Unsplash

Every year the Tax Foundation calculates Tax Freedom Day, the hypothetical day on which the average American citizen is done paying taxes for the year. The idea is that starting on January 1, everyone hands their entire paycheck over to the government. And they keep doing this, paycheck after paycheck, until Tax Freedom Day. Only after all the taxes are completely paid for the year can people keep all of what they earn. This year, Tax Freedom Day fell on April 16.

In 2019, Washington will spend a total of $4.5 trillion, or $12.4 billion per day. At that rate, the government will blow through its $3.4 trillion in tax revenues in 277 days, or by October 3. From 12:01 a.m. on October 4 until the stroke of midnight on New Year’s Eve, every dollar the federal government spends it must borrow.

The worse the deficit is, the earlier in the year Deficit Day falls.

If the government were to balance its budget, Deficit Day would fall at the stroke of midnight on New Year’s Eve. The government would spend its last penny for the current year just as taxes for the next year rolled in. Conversely, the worse the deficit is, the earlier in the year Deficit Day falls.

In modern times, the earliest Deficit Day has fallen was April 20, 1943—at the height of World War II—and the only years not to see a Deficit Day were 1956 and 1957, due to surpluses during the Eisenhower administration. Since then, the latest it has fallen was December 26, 2000.

Donald Trump campaigned on the claim that he could pay off the federal debt within eight years. The claim was so outrageous that the math required to disprove it can be done in one’s head. At the time Trump took office, the federal debt stood at $19.9 trillion and was accruing interest at the rate of 2.5 percent per year. To pay that off in eight years would have required the government to pay down more than $3.1 trillion of the debt per year.

But at the time Trump made this bold claim, the federal government was collecting—from all sources combined—only $3.3 trillion per year. In other words, to make good on his claim, Trump would have had to cut federal spending by 95 percent! The ideal time to address this problem was a half-century ago.To put that in perspective, the federal government has cut federal spending (cut spending as opposed to cutting the growth in spending) only once since 1900—and that was at the close of World War I. No, Trump was never going to pay down the debt. In fact, since he took office, the debt has grown by another $2.6 trillion.

But, as a deficit spender, Trump is not atypical. From 1947 until 1980, the federal debt grew at about the same pace as inflation. Starting with the Reagan administration, the debt ballooned. Even after adjusting for inflation, the federal debt has grown almost 700 percent since 1981. 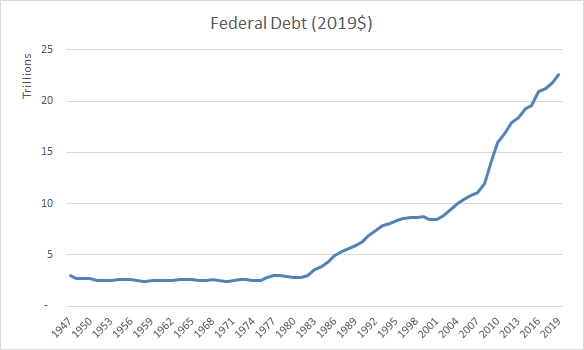 Of course, federal tax receipts have grown over this period, as well. But comparing the debt to tax receipts reveals something more disturbing. 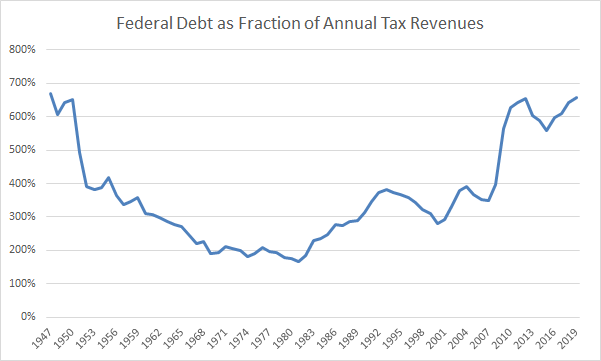 At the close of World War II, the federal debt was just shy of seven times annual federal tax receipts. From then until 1981, annual tax receipts grew faster than the debt so that by 1981, the debt was only 1.7 times annual receipts. This would be like a median US household today (income circa $60,000) maintaining a $125,000 mortgage. But, by 2019, the debt had risen almost back to the World War II level, which would be like that same median US household maintaining a $500,000 mortgage.

On top of everything else, monetization will spell the end of the dollar as the world’s reserve currency.

And what of the Fed’s monetary corner? The debt has become so large that the Fed will eventually face the choice of doing what’s good for the economy versus doing what’s good for the government. If the Fed attempts to fight our next bout of inflation by raising interest rates, it will throw the federal government into a fiscal crisis. But if the Fed does not fight the inflation, it will throw households into fiscal crises.

And what plans do our politicians have for dealing with this problem? Apparently, none whatsoever. President Trump has stopped talking about the debt in public. And over the course of twelve hours of debates, not one of the 20-plus Democratic candidates for the presidency once mentioned the debt, the deficit, or even the Social Security Board of Trustees’ warning that Social Security will be insolvent within 16 years. Trouble is brewing, and no one seems all that concerned with what’s coming.

By default, if not by outright planning, the political class’s end game is to wait for the whole mess to blow up. The Fed will be forced to monetize the debt because that will be the lesser of the evils when the fiscal chickens finally come home to roost. Monetization—printing money to pay the government’s bills—is identical to a tax on savings. Through monetization, the Fed will tax away the purchasing power of people’s savings to pay the government’s debts. As usual, the American taxpayer will be left holding a half-empty bag or worse. Also left holding the bag will be foreign businesses and governments that hold US dollars. On top of everything else, monetization will spell the end of the dollar as the world’s reserve currency.

We can see politicians already testing the waters. Elizabeth Warren talks about a wealth tax. Many politicians talk about death taxes. Monetization achieves the same things as these taxes except that it takes from everyone, not just the rich and the dead.

For an object lesson in monetization, one need look no further than Venezuela. When the government there found its back against the fiscal wall, it printed more money. And it kept right on printing until the money became utterly worthless. How worthless? People took to weighing it instead of counting it because counting it would have taken too long and the individual bills didn’t have enough value to be worth anyone’s time.

The results of America's irresponsibility will be remarkably similar to Venezuela’s if we do not get our financial house in order soon.

The Venezuelan disaster was born of governmental irresponsibility. The government there simply spent more money than it had for too long, and when it found itself up against this sad reality, it simply printed more.

American irresponsibility is no different, and the results of our own actions will be remarkably similar to Venezuela’s if we do not get our financial house in order soon. No one seems to be interested in that, though. So we once again “celebrate” Deficit Day as an annual reminder of our collective unwillingness to behave reasonably. There will come a day, not too terribly far off at this point, when this metric will be as useless as the Venezuelan bolivar. The smart, prudent thing would be to address this problem now. Sadly, no one, neither the present crop of politicians nor the American people themselves, is interested in addressing the problem. They will all, without question, be quick to point the finger of blame when the issue finally comes to a hard boil, but by then it will simply be too late.

The ideal time to address this problem was a half-century ago. We could still address it now, but it would be both difficult and painful, which is precisely how we know it will not happen. So Happy Deficit Day to the United States of America for the 60th-plus year running.