NYU Prof: More Than 20 Percent of Universities Could Fail Because of the Lockdowns

Higher education's house of cards was destined to fall at some point, but COVID-19 has become a catalyst.

Photo by Nathan Dumlao on Unsplash

Unlike restaurants, movie theaters, and hotels, colleges and universities do have the ability to offer their product remotely. Students with their faces planted firmly into Zoom calls have become the new normal pretty quickly. But when a quarter to almost half of a university’s income comes from room and board, it becomes pretty clear pretty quickly that those Zoom classes are gutting college and university revenue streams.

The upshot of all of this, according to NYU marketing professor Scott Galloway, is rather disconcerting. In examining some 442 US universities, Galloway estimates that more than 20 percent could fail because of the lockdowns, and that another 30 percent will struggle to remain open. That’s 50 percent of US colleges and universities at very serious (or mortal) risk.

None of this is all that surprising. The number of potential college students is limited by the number of college-ready young people. And that number has not been growing. Faced with a mostly stagnant population, universities started a sort of dance of death several decades ago. To attract more students, institutions started improving their physical plants - first with air-conditioning (that wasn’t a thing in colleges a generation ago), then with newer and better dorms, then with all manner of extravagances like climbing walls, personal trainers, state of the art gyms, campus-wide wifi, and transportation to local hotspots. But these amenities were expensive. To pay for them, universities had to attract still more students, which they did by improving their amenities even further.

And when they had tapped out the population of college-ready young people, universities lowered their standards and started admitting not-so-college-ready young people. But to keep those students in their seats and paying tuition, universities had to provide all manner of remedial help. And that required yet more physical plant and more personnel to get these students to a point that they had at least a chance of graduating. The numbers are unambiguous. In 1970, 17 percent of 18 to 24 year olds in the U.S. were full-time college students at 4-year institutions. That number rose steadily to over 30 percent by 2018. That’s more than a 75 percent growth in the number of college students relative to the population. How is it possible that, over the same decades that the inflation-adjusted price of higher education more than doubled, the population-adjusted number of 18 to 24 year olds opting to go to college increased 75 percent? 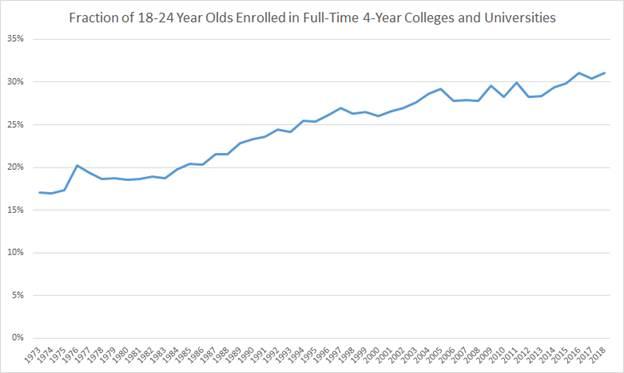 Three forces were at work. In guaranteeing student loans, the federal government simultaneously made college more expensive (by increasing the number of students attending college), and made it easier for students to borrow to pay for it (by forcing taxpayers to pick up some of the tab). Second, the success of high schools came to be measured by the number of their students accepted into colleges. This encouraged high school teachers and administrators to push more students to go to college. And finally, colleges strong-armed faculty into watering down academic rigor in order to keep enrollments up. In short, to capture more revenue, colleges had to increase their enrollments. To do that, colleges had to make graduating easier.

This house of cards was destined to fall at some point, but COVID-19 has become a catalyst. “At some point” is very likely upon us.

Just like any other venture, colleges will go out of business when they become insolvent. There is nothing special about a college in this respect. Since 2016, some 52 colleges and universities have closed their doors or merged with other institutions. With the new reality of COVID-19, this trend will accelerate. Big state schools and those in the Ivy League will come out the other side to be sure. But small liberal arts colleges will not be nearly as fortunate.

But that’s only the beginning of the very bad news for at-risk institutions. The COVID-19 related downturn has caused any number of young people to ask themselves whether they want to go to college at all given the exorbitant costs. For the first time in decades they are asking the right sorts of questions about college. The most important question, of course, is whether college is a good investment.

Young people are finding that the answer is more complex than it first appears. The career-long financial return to a four-year degree ranges from over $3 million for STEM majors to a negative quarter million dollars for majors like Early Childhood Education, Voice and Opera, and Piano Performance. Most majors ending in the word, “studies” (Film Studies, Organizational Studies, Urban Studies, Liberal Studies) deliver a financial return anywhere from one-third to one-tenth that of the STEM majors.

As institutions compromise standards in the name of increasing student numbers, employers will come to realize that, while some college majors remain valuable, a college degree in general isn’t necessarily so. As COVID forces universities to offer classes online, students will come to realize they can attend college from their own homes at significant savings. Either one of these factors would put significant financial pressure on colleges and universities. And as they tighten their belts, the first programs they’ll eliminate are those for which demand is lowest.

The sunny side of all of this is that a stronger system of higher education will emerge, one re-focused on educating students rather than on selling a “college experience.” There will still be plenty of options for that “college experience,” but there will likely be a number of purely utilitarian options for the budget-conscious and academically driven. In the end, COVID-19 may come to be seen as the catalyst that disrupted the American system of higher education for the better, no matter how grim it looks now.