A New Labor Dept. Report Reveals the Bulk of the Gender Earnings Gap Can Be Explained by Age, Hours Worked, and Marital Status 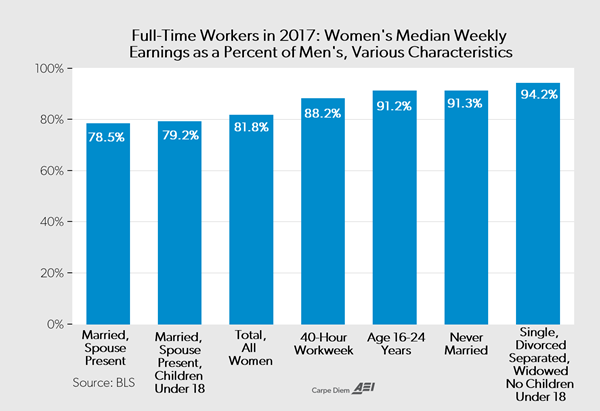 How do we explain the fact that women working full-time last year earned less than 82 cents for every dollar men earned according to the BLS? Here’s how the National Committee on Pay Equity (NCPE) explains it:

The wage gap exists, in part, because many women and people of color are still segregated into a few low-paying occupations. Part of the wage gap results from differences in education, experience or time in the workforce. But a significant portion cannot be explained by any of those factors; it is attributable to discrimination. In other words, certain jobs pay less because they are held by women and people of color. (emphasis added)

Let’s investigate the claim that the gender pay gap is a result of discrimination by looking at some of the data on wages and hours worked by gender and by marital status and age in the BLS report for 2017:

1. Among full-time workers (those working 35 hours or more per week), men were more likely than women to work a greater number of hours (see Table 5 of the report).

What’s especially interesting is that women working 35-39 hours per week last year earned 107% of men’s earnings for those weekly hours, i.e., there was a 7% gender earnings gap in favor of female workers for that cohort. Using the standard political and gender rhetoric of groups like the National Committee on Pay Equity, couldn’t that earnings premium for women be mostly explained by gender discrimination against men in the labor market for employees working 35-39 hours per week? That is, to be consistent, shouldn’t the claim here be that “certain jobs pay less because they are held by men”?

Because men work more hours on average than women, some of the raw wage gap naturally disappears just by simply controlling for the number of hours worked per week, an important factor not even mentioned by groups like the National Committee on Pay Equity. For example, women earned 81.8% of median male earnings for all workers working 35 hours per week or more, for a raw, unadjusted pay gap of 18.2% for all full-time workers.

But for those workers with a 40-hour workweek (about three-quarters of all full-time female workers), women earned 88.2% of median male earnings, for a pay gap of only 11.8% (see chart). Therefore, once we control only for one variable—hours worked—and compare men and women both working 40-hours per week in 2017, more than one-third of the raw 18.2% pay gap reported by the BLS disappears.

Once you control for marital status and children at home, we can explain more than two-thirds of the unadjusted gender earnings gap.

3. The BLS also reports in Table 1 of the study that for young workers ages 16-24 years, women earned 91.2% of the median earnings of their male counterparts working full-time reflecting an 8.8% gender earnings gap for that age cohort last year. Once again, controlling for just a single important variable—age—we find that more than half of the overall unadjusted raw earnings gap for all workers (18.2%) disappears for young workers.

4. The BLS reports that for full-time single workers who have never married, women earned 91.3% of men’s earnings in 2017, which is an earnings gap of only 8.7% (see Table 1 of the study and chart above), compared to an overall unadjusted pay gap of 18.2% for workers in that group. When controlling for marital status and comparing the earnings of unmarried men and unmarried women, more than half (52.2%) of the raw 18.2% earnings gap is explained by just one variable (among many): marital status.

5. In Table 7, the BLS reports that for full-time single workers with no children under 18 years old at home (includes never married, divorced, separated, and widowed), women’s median weekly earnings of $717 were 94.2% of the weekly earnings of $761 for their male counterparts in that cohort (see chart above). For this group, once you control for marital status and children at home, we can explain more than two-thirds of the unadjusted gender earnings gap (6.81% vs. 18.2% unadjusted).

Once we start controlling for the many relevant factors that affect earnings, most of the raw earnings differential disappears.

7. Also from Table 7 of the report, married women (with spouse present) working full-time with children under 18 years at home earned 79.2% of what married men (spouse present) earned working full-time with children under 18 years (see chart). Once again, we find that marriage and motherhood have a significantly negative effect on women’s earnings; but those lower earnings don’t necessarily result from labor market discrimination, they more likely result from personal family choices about careers, family friendly and flexible workplaces, commute time, child care, and the number of hours worked, etc.

As shown above, once we start controlling individually for the many relevant factors that affect earnings, e.g. hours worked, age, marital status, and having children, most of the raw earnings differential disappears. In a more comprehensive study that controlled for all of the relevant variables simultaneously, we would likely find that those variables would account for nearly 100% of the unadjusted, raw earnings differential of 18.2% for women’s earnings compared to men as reported by the BLS. Discrimination, to the extent that it does exist, would likely account for a very small portion of the raw 18.1% gender earnings gap.

For example, a comprehensive 2009 study from the Department of Labor (“An Analysis of Reasons for the Disparity in Wages Between Men and Women”) came to the following conclusion (emphasis added):

This study leads to the unambiguous conclusion that the differences in the compensation of men and women are the result of a multitude of factors and that the raw wage gap should not be used as the basis to justify corrective action. Indeed, there may be nothing to correct. The differences in raw wages may be almost entirely the result of the individual choices being made by both male and female workers. (emphasis added)

Wage: A payment of money for labor or services usually according to contract and paid on an hourly, daily, or piecework basis.

Earnings: Money obtained in return for labor or services.

Using the definition of “wage” above, the claim of a “gender wage gap” implies for many (like the NCPE) that women are paid lower hourly or daily wages than men when they are working side-by-side for the same company doing the exact same job with the same educational and work backgrounds.

Language and words are important. And that’s why I think it’s important and more accurate to refer to a “gender earnings gap” rather than a “gender pay gap” or “gender wage gap.” Note that the NCPE uses the terms “gender wage gap” and “wage gap” 12 times on just the Q&A page of its website and more than 20 times on its main website.

I think it’s time to completely scrap the term “gender wage gap” and replace it with the more accurate “gender earnings gap.”

Switching to using the term “gender earnings gap” broadens the concept of earnings differentials by gender, and more accurately allows for the reality that women are usually making the same hourly (or weekly) wage as men doing the exact same job. But men often “earn” more on average than women because men are working longer hours on average, performing different jobs than women, working in jobs that are physically more rigorous (construction), working in jobs that are more dangerous (logging) and in more hostile work environments (oil rigs workers), involve longer commute times and may be less flexible and less family friendly.

Republished with permission from AEI