The paper gives us a way of thinking more clearly about shifts in the Overton window.

The idea that concepts depend on their reference class isn’t new. A short basketball player is tall and a poor American is rich. One might have thought, however, that a blue dot is a blue dot. Blue can be defined by wavelength so unlike a relative concept—like short or rich—that there is some objective reality behind blue even if the boundaries are vague. Nevertheless, in a thought-provoking new paper in Science, the all-star team of Levari, Gilbert, Wilson, Sievers, Amodio, and Wheatley show that what we identify as blue expands as the prevalence of blue decreases.

In the figure below, for example, the authors ask respondents to identify a dot as blue or purple. The figure on the left shows that as the objective shading increases from very purple to very blue more people identify the dot as blue, just as one would expect. (The initial and final 200 trials indicate that there is no tendency for changes over time.) In the figure on the right, however, blue dots were made less prevalent in the final 200 trials and, after the decrease in the prevalence, the tendency to identify a dot as blue increases dramatically. In the decreasing prevalence condition on the right, a dot that was previously identified as blue only 25 percent of the time now becomes identified as blue 50 percent of the time! (Read upwards from the horizontal axis and compare the yellow and blue prediction lines). 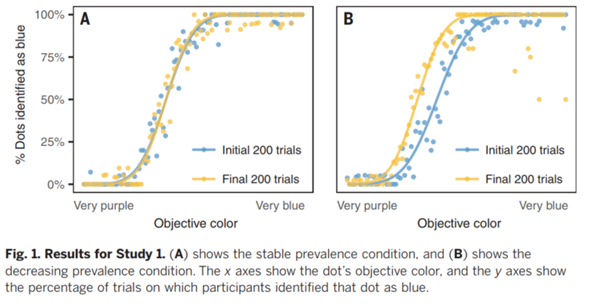 Clever. But so what? What the authors then go on to show, however, is that the same phenomenon happens with complex concepts for which we arguably would like to have a consistent and constant identification.

Are people susceptible to prevalence-induced concept change? To answer this question, we showed participants in seven studies a series of stimuli and asked them to determine whether each stimulus was or was not an instance of a concept. The concepts ranged from simple (“Is this dot blue?”) to complex (“Is this research proposal ethical?”). After participants did this for a while, we changed the prevalence of the concept’s instances and then measured whether the concept had expanded—that is, whether it had come to include instances that it had previously excluded.

Assuming the result replicates (the authors have 7 studies which appear to me to be independent, although each study is fairly small in size (20-100) and drawn from Harvard undergrads) it has many implications.

…in 1960, Webster’s dictionary defined “aggression” as “an unprovoked attack or invasion,” but today that concept can include behaviors such as making insufficient eye contact or asking people where they are from. Many other concepts, such as abuse, bullying, mental disorder, trauma, addiction, and prejudice, have expanded of late as well.

… Many organizations and institutions are dedicated to identifying and reducing the prevalence of social problems, from unethical research to unwarranted aggressions. But our studies suggest that even well-meaning agents may sometimes fail to recognize the success of their own efforts, simply because they view each new instance in the decreasingly problematic context that they themselves have brought about. Although modern societies have made extraordinary progress in solving a wide range of social problems, from poverty and illiteracy to violence and infant mortality, the majority of people believe that the world is getting worse. The fact that concepts grow larger when their instances grow smaller may be one source of that pessimism.

The paper also gives us a way of thinking more clearly about shifts in the Overton window. When strong sexism declines, for example, the Overton window shrinks on one end and expands on the other so that what was once not considered sexism at all (e.g. “men and women have different preferences which might explain job choice") now becomes violently sexist.

Nicholas Christakis and the fearless Gabriel Rossman point out on Twitter (see below) that it works the other way as well. Namely, the presence of extremes can help others near the middle by widening the set of issues that can be discussed or studied without fear of opprobrium. 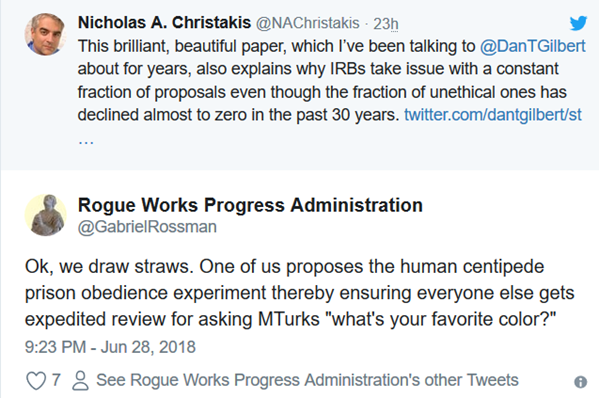 But why shouldn’t our standards change over time? Most of the people in the 1850s who thought slavery was an abomination would have rejected the idea of inter-racial marriage. Wife-beating wasn’t considered a violent crime in just the very recent past. What racism and sexism mean has changed over time. Are these examples of concept creep or progress? I’d argue progress but the blue dot experiment of Levari et al. suggests that if even objective concepts morph under prevalence inducement then subjective concepts surely will. The issue then is not to prevent progress but to recognize it and not be fooled into thinking that progress hasn’t been made just because our identifications have changed.