Why Billionaires Are Good for Us

Billionaires aren't quite as rich as we think they are.

One of the most enduring justifications for State intervention in an economy is the concept of wealth inequality. As the story goes, just one percent of the population owns roughly half of the wealth in the world. This is used as justification for a long range of programs, such as welfare, the graduated income tax, and multiple components of the Green New Deal. However, the problem with this narrative is it fails to address two major questions:

To begin, we need to first understand how wealth is defined. Wealth, in investment terms, is defined as “the value of all the assets of worth owned by a person, community, company or country.” The underlying issue of the definition of wealth is within the concept of value. Value is not an objective concept; each individual will value every good or service on the planet differently based on personal interests. This is best defined in the Paradox of Value.

This is the underlying purpose of trade—to obtain something of relatively low supply locally for something of local abundance.

The problem here is that such valuations are subjective and highly reliant on meeting specific conditions. If we look at the components of wealth, the wealth of the one percent is made up predominantly of business ownership stakes. 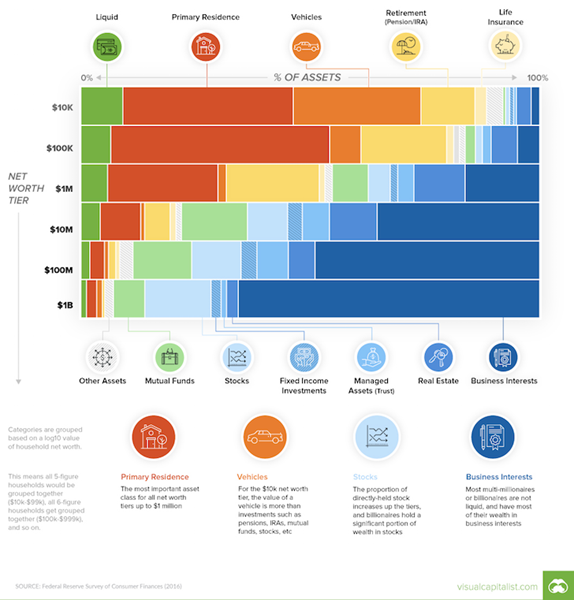 Business ownership is typically represented by stock share in the company. How a person’s wealth is defined here is taking the current listed market price of the stock and multiplying it by the ownership stake of that individual. The problem with this definition is how equity is traded. The value of equity you will see on the Dow Jones is not the value of every share in existence. It is, instead, effectively the last marginal transaction for that particular company.

So if Amazon is listing at $1,800 per share, all this means is that someone out there sold one or more shares for $1,800 to someone else. This does not mean that if someone waved $920 billion at the market, they’d be the sole owner of Amazon.

The vast majority of the ~500 million outstanding shares of Amazon are valued more than the listed market price by the holder. To get Jeff Bezos to part with his roughly 20 million shares would require a lot more than $37 billion. However, this does not mean Jeff Bezos is richer than advertised. Conversely, people who don’t own Amazon stock value it below the $1,800 market price. If Mr. Bezos were to face a life-or-death situation in which he needed to pay $37 billion in cash, he would be lucky to come up with a small percentage of that as attempting to dump that many shares on the market at once would collapse the market price.

In terms of assets that can be used without suffering a value impairment, the top one percent really only owns about six percent of the assets.

The issue here is that maintaining high levels of wealth requires never trading in the goods. The only way the wealthy can remain wealthy is to never convert their equity into usable liquidity. While a single share of stock is, in accounting terms, classified as a liquid asset, a large block of shares is about as illiquid as owning a skyscraper or NFL stadium. Because of this, the wealth of the one percent is largely illusory since they realistically can’t use it for anything lest they destroy its apparent value.

Conversely, the bottom 99 percent posses roughly 15 percent of their assets in some kind of easily liquid form and their stock assets are significantly more liquid than those in the top. A person with $50,000 in assets can easily liquidate their property without causing a blip in the market pricing. In terms of assets that can be used without suffering a value impairment, the top one percent really only owns about six percent of the assets. While this is still unequal, it’s nowhere near the gaudy 50 percent frequently presented.

One can easily counter this to say that those assets still primarily benefit the wealthy individual and the rest of us are stuck holding the bag. However, this is also not held up as true. If we use the concept of CEO pay disparity, we can demonstrate who really benefits from that wealth.

Take Wal-Mart, a favorite target of unfair wage practice claims. The company’s CEO, Doug McMillon, is accused of earning 1,180 times more than the median worker with an annual compensation package of $22.8 million. To a single individual, $22.8 million seems like a lot of money. But consider that Wal-Mart also has in the order of 2.2 million employees. If the CEO were to take a $1 salary and the company were to spread that over each worker, the worker would receive a one-time bonus of $10. Mr. McMillon would quickly go bankrupt just trying to buy dinner for each employee just once.

The workers, or the 99 percent, are overwhelmingly the beneficiaries of all that wealth the Waltons formally own.

If we look at Wal-Mart’s 2018 10-K report, the company produced revenues of $514 billion. Of that, $385 billion was a direct expense, primarily sent down the product chain to suppliers to pay for their workers and suppliers and so forth. Roughly $50 billion went to store workers. Another $107 billion was on SG&A, which can be assumed to be almost entirely labor-related, either direct to Wal-Mart employees or outside companies paying their workers.

All told, an estimated $490 billion of those $514 billion in revenues ended up in the pockets of a direct worker somewhere in the world, supporting untold millions. Just the direct Wal-Mart employees collected an estimated 20-25 percent of the total revenues. The total C-Suite compensation package doesn’t even register as a rounding error. Investors got a dividend of $6 billion, or just one percent of that. It’s important to note that investors are primarily held in individual investment accounts or pension systems, so that also goes back to the line worker.

The wealthy owners of Wal-Mart, the Waltons, only see 0.2 percent of the economic activity generated by the company. That's a far cry from the 95 percent paid to workers and the remainder going to retirement pension accounts for individuals. The workers, or the 99 percent, are overwhelmingly the beneficiaries of all that wealth the Waltons formally own.

Why the Rich Are Good for Us

Ultimately, these extremely on-paper wealthy individuals have been of immense value to the rest of us. Without someone taking the risk to form a business, to collect all of our disparate skills that, alone, are worthless and combining them into an organization, we would not be living in a world where poverty and hunger continues to collapse and some countries have gotten so wealthy that people with broadband internet and smartphones are classified as impoverished.

This is entirely thanks to all those rich people who are only asking to keep a very small portion of the production their assets produce. Attempting to destroy this with redistribution schemes will ultimately be harmful to the 99 percent.