People would have far fewer political grievances in a decentralized system.

Recently, a dozen sheriffs in Washington state announced that they would refuse to enforce the newly passed Initiative 1639, which raised the legal age of purchasing a firearm of any sort to 21, expanded background check requirements, increased the waiting period, and mandated weapon storage when not in active use. Predictably, political proponents immediately threatened these sheriffs, who were hired to enforce county, not state, laws, with legal action. Of course, when I say passed, what I really mean is that 14 of 39 counties in Washington decided the referendum was a good idea. 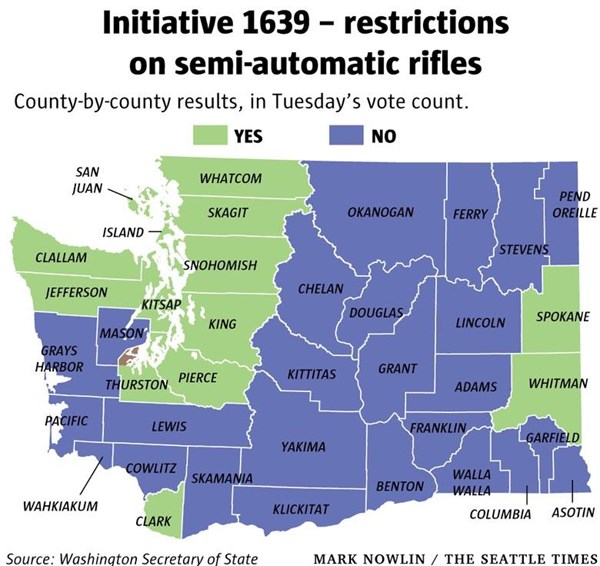 Based on actual voting patterns, the victory of this particular bill can be almost entirely explained by the margin of victory in King County (506k), where Seattle is located, which accounted for 87 percent the margin of victory of the statewide referendum (580k). This is a common phenomenon in many states that have a large single urban population. Another classic example is New York and the political dominance of the city in state-wide politics.

The Problem with Centralized Authority

What the refusal of the 12 county law enforcement officials is doing is voicing displeasure with what amounts to a distant population dictating how they’ll operate in their own homes. Why are people in Seattle, who may never even set foot on the eastern side of the Cascades, let alone actually make that region their permanent home, imposing law on residents of Omak?

A nearly identical result of the above picture was experienced in Legislative Initiative 940, which mandated law enforcement personnel behave like good citizens, such as mandating de-escalation as first response and legally mandating police provide first aid to wounded individuals, including suspects who have been shot.

Though, to be fair to residents of King County, this reliance on statewide referendums for local issues can backfire. Initiative 1634, which banned taxation of sodas and other items politicians in Seattle find in vogue to tax, also passed, essentially with only King, San Juan, and Jefferson disagreeing with it. 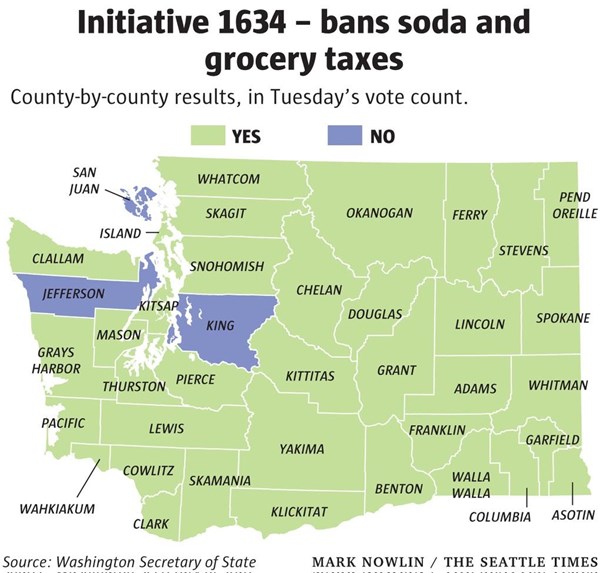 An identical result to the above picture was experienced, though with colors flipped since it failed, for Initiative 1631, which would have imposed CO2 taxes on Washington residents. If we take all four referendums in bulk, only six counties in Washington can be considered 100 percent happy about the results. Everyone else basically only got some of the policies they wanted. This means that only the majorities of 15 percent of the counties in the state could be classified as satisfied with the results of the election cycle, leaving the other 85 percent stewing like those dozen sheriffs.

This is a terrible way to run a society, where only a small fraction of the people are happy with political and social decisions, and the vast majority always have to eat “compromise” imposed upon them by outsiders.

However, it doesn’t have to be this way. Residents of Seattle, San Francisco, and New York City shouldn’t have to believe that they can’t live their chosen lifestyle without this strange belief that those same policies and decisions must radiate out hundreds of miles from their borders. Nor do residents who aren’t part of large urban centers need to feel like they have to strategically handcuff urban dwellers to avoid getting swept up in their preferences.

The solution to these issues is radical decentralization. There is no logical reason why Washington state must continue to exist and can’t be split up into 39 new states. Just like there is very little that is done in D.C. that can’t be done just as well, or better, in Olympia, there’s very little that is done in Olympia that can’t be done just as well, or better, in Ephrata, Washington. This way, the people of the new state of King can have gun laws, soda taxes, a kinder police force, and CO2 taxes without stepping on the toes of people in the new state of Yakima. The only real objections would come from politicians, both in D.C. and in Washington state, who are only concerned with maintaining personal power—if Washington state decentralizes into 39 independent entities, all that would happen is a layer of state politicians and bureaucrats would be laid off, and US senators would find their vote is no longer worth 1 percent of the Senate but 0.6 percent.

In reality, the US should be made up of, at minimum, 3,142 states (the number of counties and census areas), though certain areas, like Los Angeles County, can be split into at least 17 distinct states itself, and NYC can be cut into 73 around police districts, each of which are large cities in their own right. Again, the only real objection to this would be the middlemen state-level politicians who would no longer have a job and congressmen who would see their voting power radically diluted. Which, to say, is not a legitimate reason to oppose splitting the US up into smaller political jurisdictions.

Under such a system, people will have far fewer political grievances since they’ll be unlikely to have to live under a regime that’s unfavorable to them. It’s much easier for someone unhappy with policies of the hypothetical state of King to move to the hypothetical state of Kittitas than it is to relocate to Idaho, similar to how it’s easier for a resident of New Mexico to relocate to Texas than it is to New Zealand. Similar to the setup in Luxemburg, or even how Clark County residents have employment in Portland, dividing up political jurisdictions into small pieces allows for people to work and live in preferred jurisdictions without the significant inconvenience of a long-distance move. It’s much easier to find a county with a preferred lifestyle than trying to get an entire state to fit your preferences. This would radically reduce the desire of local sheriffs to rebel against imposed laws, and people would be far happier with the expanded political choices—finding common political and social ground with 50 thousand is far easier than 7.5 million.