All rent control does is artificially restrict supply while inflating demand.

According to a recent Wall Street Journal article (“Rent Controls, a Bane of Landlords, Are Gaining Support as Costs Soar“), rent control is making a comeback in response to rising housing prices in urban areas across the country in states like California, Illinois, Washington, and Massachusetts. Megan McArdle responds in a Bloomberg View op-ed “Rent Control Needs Retirement, Not a Comeback” (emphasis mine):

Policymakers should remember that a price is just the intersection of supply and demand. If you alter the price, but don’t alter the supply or the demand, the problem doesn’t go away; rationing just shows up in different forms. There will still be too many people who cannot find housing in your area.

Worse still, price controls actually make the scarcity worse. They increase demand — who wouldn’t want to live in New York City in a $600-a-month apartment? Meanwhile, price ceilings reduce the supply because they decrease the incentive to build, and can make it downright imperative to remove rental housing from the market and turn it to some other use — condos, warehouses, anything that won’t trigger the rent controls.

And in the long run, the situation for the very low-income people you’re trying to help probably gets worse. After all, if you take price signals out of the market, something has to ration the limited supply of housing: years-long wait lists, or personal friendships, or credit scores, or side payments to people lucky enough to have some housing. The wider the gap between supply and demand gets, the worse that rationing will be. And the people left out by those forms of rationing will be every bit as needy and deserving as the people currently being forced out by higher rents; given the deleterious effects on the supply of rental housing, possibly more so.

If politicians actually want to make sure everyone who needs a place to rest their head has one, there’s only one way to do it: Build more housing. Which means, in turn, loosening the legal restrictions and community veto points that make it so hard to add supply. Because there’s no way to escape the fundamental math: Unless you build enough housing to shelter the people who want to live in your city, a whole lot of people will be left out in the cold. 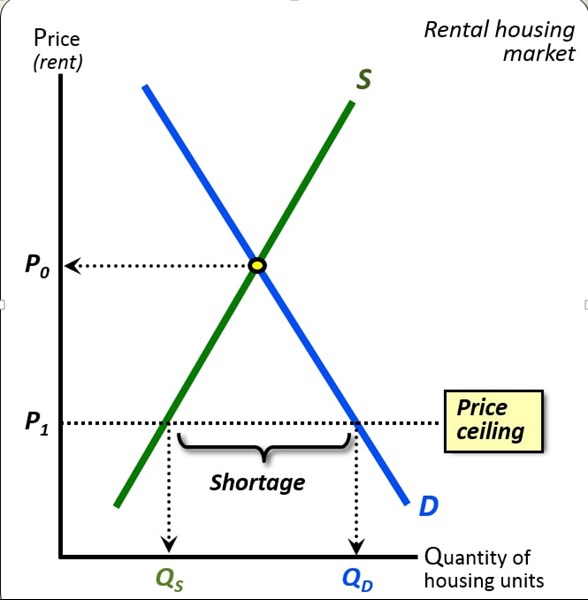 As the graphical Supply/Demand analysis above of rent control illustrates very clearly, rent control laws that artificially force the rental price of housing (P1 above) below the market-clearing equilibrium price (P0) are guaranteed to create a housing shortage by: a) increasing the number of rental units demanded at the artificially low rents (QD) and b) decreasing the number of rental units supplied to the market (QS).

You can artificially restrict the amount of rent a landlord can legally charge for a rental unit, but you can’t force developers, builders, and landlords to build or supply more rental housing in the future. And the supply of rental housing in markets with rent control is guaranteed to decline.

If a perverse public policy goal was, in fact, to guarantee that there would be a continued and worsening supply of rental housing, there would be no more effective way to ensure that outcome than a government rent control law. And despite the best of intentions on behalf of policymakers to promote more affordable housing with rent control laws as a way to combat high housing prices, the reality is that those very laws are guaranteed, with 100 percent certainty, to do the opposite by making affordable housing as scarce as possible.

Price controls aren’t the answer. Building more housing is the only real solution to increase the supply of affordable housing.