There's No Way Obamacare Can Last

The trendline is absolutely unsustainable

The Congressional Budget Office score of the American Health Care Act [claims to shows] that the bill will reduce deficits by $119 billion over the next decade and result in 23 million more people being uninsured by 2026. This leaves the impression that people would be better off if Obamacare were unchanged. But a new report from the Department of Health and Human Services dispels this myth.

Premiums have doubled and tripled and are rising further. The HHS report shows that premiums in the individual market exchanges increased by 105 percent in the 39 states using Healthcare.gov from 2013 to 2017. This is equivalent to $244 per month in additional premium payments for people buying insurance through the exchanges, or $2,928 over the course of a year. People not eligible for exchange subsidies are fully exposed to these increases, while taxpayers will bear the brunt in the form of higher outlays for subsidies for enrollees who are eligible.

Despite the promises that Obamacare would “cut the cost of a typical family's premium by up to $2,500 a year,” average premiums on the exchanges more than doubled over this period. In some states, such as Alabama and Alaska, the average premium more than tripled.

The high average increase is not driven by a few outliers, as 23 out of the 39 states included in the analysis experienced premium increases in excess of 105 percent. Only three states, North Dakota, New Hampshire, and New Jersey, had cumulative premium increases below 50 percent. 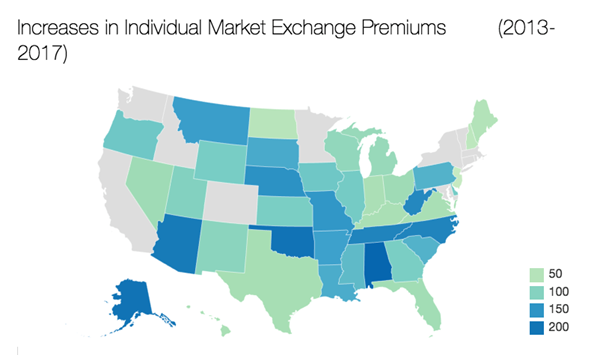 As the report acknowledges, the composition of the population enrolling in plans through the exchanges has changed over time due to the adverse selection problems created by the laws subsidy and regulation frameworks.

For example, the community rating age bands, which dictate how much more companies can charge older, higher-risk enrollees, were set at 3:1 under Obamacare. A recent study by Milliman estimated that relaxing these age bands to 5:1 would reduce premiums for people aged 20-29 by 15 percent while increasing premiums for older enrollees.

Lower premiums for younger, healthier people would encourage more of them to enroll through the exchanges instead of foregoing health insurance because it is too expensive for them. Older, less healthy people make up a larger share of the exchange population now than in earlier years, which exacerbates the premium increases on that population.

Due to data limitations, the report does not deal with the population getting plans on the individual market but not through the exchanges. These people accounted for more than a third of the total individual market. They are not eligible for the law's subsidies, so there is likely less adverse selection for the off-exchange population, but these enrollees have to bear the entirety of the costs of those increases.

Families choosing a plan through the exchanges have seen their premiums more than double since 2013. In some states, a wave of insurers leaving the exchange market has created situations where only one insurer is offering products for entire states.

The trend is absolutely unsustainable. Alabama and Alaska, which have seen the two highest cumulative premium increases, are both down to only one insurer. In the entire country, only Virginia saw the number of participating insurers increase from 2016 to 2017. Just today, Blue Cross Blue Shield of Kansas City announced it would be exiting the exchange, leaving 25 counties in Missouri without a participating insurer for now.

The lack of choices and competition in a growing number of places makes it unlikely that there will be an end to rapid premium growth, absent reform. While the CBO estimates will provide some insight into the effects of the bill in its current iteration, a working group of Senators is crafting a revised bill with major alterations.

Getting the design of replacement legislation right is important, and the CBO score will give the working group of senators more information about which aspects of the bill that passed the House need the most adjustment. Provisions that allow for more competition and choice for people trying to get insurance through the individual market will help bring down annual premium increases.

Since 2013, this group has had to grapple with fewer choices while their premiums doubled. A well-crafted bill could go some way to reversing that unsustainable trend.

This originally ran on the E21 blog.