The Numbers Are in: Social Security Robs the Working Poor

Back in 2011, investment guru Warren Buffett famously complained in the New York Times that his secretaries were paying higher federal payroll tax rates than he was:

Our leaders have asked for 'shared sacrifice.' But when they did the asking, they spared me.... what I paid was only 17.4 percent of my taxable income – and that’s actually a lower percentage than was paid by any of the other 20 people in our office. Their tax burdens ranged from 33 percent to 41 percent and averaged 36 percent.”

Buffett used some creative accounting for his numbers; he used only “taxable income,” which means he didn't count all the deductions his employees were using to write off their income taxes. For middle-class workers making about $75,000 per year, that's typically a heavy percentage of their income. Moreover, for the tax rates Buffett claimed applied to his assistants, they must have been paid in the range of $200,000 per year or more.

Despite Buffett's accounting trickery, there was a level of truth to his complaint: the burden of Social Security and Medicare payroll taxes does fall almost exclusively upon the poor and middle classes. And Buffett acknowledged this fact in his New York Times op-ed:

The mega-rich pay income taxes at a rate of 15 percent on most of their earnings but pay practically nothing in payroll taxes. It’s a different story for the middle class: typically, they fall into the 15 percent and 25 percent income tax brackets, and then are hit with heavy payroll taxes to boot.”

The Questionable Benefit of Paying Those Heavy Taxes

The Social Security Administration's website now allows its “customers” to enter income numbers over a career and pull out a precise benefit level. So it's relatively easy today for anyone to contrast private investments with Social Security benefit levels with an unprecedented level of precision. (This author has run the numbers several times before in the past few decades using the SSA's PIA calculator application.)

In every conceivable scenario, the private fund pays more than Social Security to the minimum wage worker.

While it has long been known that middle class and wealthy people do not profit by “investing” their money in Social Security compared with a private retirement fund, the impact of Social Security upon a worker trapped in a minimum wage job throughout his career has been left uncalculated – until now. Thus, the following question can be answered authoritatively:

Is it possible for a minimum wage worker to do better putting his money into Social Security than if he were allowed to invest his money in a private fund earning interest at the same rate as the S&P 500?

And the answer is this: No, it's not possible. In every conceivable scenario, the private fund pays more than Social Security to the minimum wage worker.

Consider the case of a person who works 50 weeks per year, 40 hours per week at the legal minimum wage, beginning in 1970 and retiring at the end of 2017.

Only the Old Age and Survivors' Assistance proportion of the Social Security tax can be added to the private fund, not Disability Insurance or Medicare, which in 2017 is 10.6 percent of total income (out of the 15.3 percent total tax imposed upon the self-employed). The worker must purchase a term insurance policy with a private fund to cover the “survivors” part of the risk in the Social Security program, and (to keep things fair) a 0.75 percent “management fee” is deducted from the retirement account annually.

Most couples in that salary range are actually two-income families.

At the end of his career, the minimum wage worker ends up with a retirement fund of $262,551.02 from the wages he otherwise would have paid into the Social Security “trust fund.”

From this account, a person could safely withdraw just over seven percent per year, with the fund replenishing itself in perpetuity without losing value – meanwhile, the S&P has grown at just over 11 percent annually, and inflation has been a little less than four percent during the same last 50 years. That's an average monthly income of over $1,500, adjusted upwards for inflation over time, it is far more than the $974.00 that the Social Security Administration's website claims it will pay its customers.

The numbers favor a private account even if one uses favorable circumstances for receiving Social Security, with a single income earner in a two-couple household where the spouse gets half the Social Security benefit of the wage-earner. The spousal benefit increases the monthly Social Security payment to $1,461.00, while the private fund remains the same at $1,579.68.

And this scenario is highly unlikely: A couple with just one worker making the legal federal minimum wage is a rarity; most couples in that salary range are two-income families. In a two-income minimum wage family, the private fund pays $3,159.36 versus a $1,948 monthly benefit from Social Security. In every family scenario, whether single, married with one income or married with two incomes, the difference is that Social Security is cheating poor retirees out of several hundred thousand dollars in benefits (see table below). 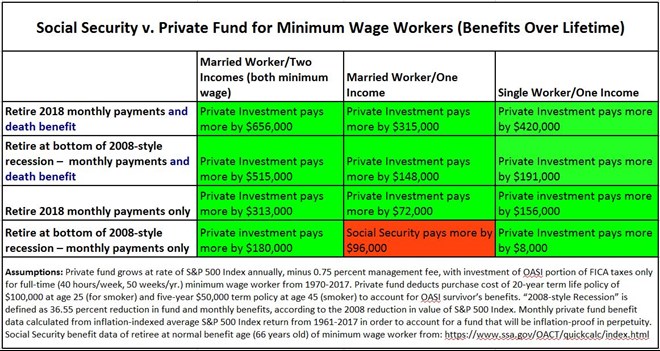 All three family scenarios assume a 2017 bull market with earnings of 10.62 percent increase in S&P 500-based private fund for 2017 (based upon YTD as of August 23). But what if the retirement date is at the bottom of a 2008-level stock market crash? Even in that scenario (in calendar year 2008, nearly 37 percent of the S&P 500's value was erased by the bear market), every possible permutation of family arrangement makes more total money from the private fund than from Social Security. Whether single earners, two-income couples, and one-income couples, all make more than Social Security in a private fund.

There's only one artificial scenario that could be constructed where Social Security could claim to be of partial benefit to a poor family. If:

Then, Social Security pays a slightly higher monthly benefit. Over a typical benefit lifespan – 256 months for women and 215 months for men – Social Security's monthly payments make up for nearly two-thirds of the death benefit in a private fund.

When the leftist mainstream media reported about Warren Buffett's column, they focused exclusively upon the income tax proportion of the tax burden. They ignored how Buffett's column acknowledges that Social Security and Medicare payroll taxes are not “contributions” to a “trust fund” to care for workers, akin to private sector 401k plans, but are instead regressive taxes imposed upon the working classes.

This admission belies a political establish core tenet of faith that goes back to the New Deal, that Social Security serves as an investment to protect poor and middle-class workers and is not as a general revenue tax. Buffett's essay busted that myth by correctly claiming that Social Security impoverishes working people with general revenue taxation.

But even if one assumes Social Security taxes are an “investment” made by the poor for their retirement like a 401k plan, the numbers provided by the Social Security Administration itself reveal it's still a financial rip-off for the very poorest of the working poor.

Thomas R. Eddlem is a freelance writer who has been published in more than 20 periodicals, and a high school history and economics teacher. He’s the author of Primary Source American History, available on TeachersPayTeachers.com and his blog is located at teddlem.blogspot.com.