Federal Reserve Economists have long claimed that suppressing interest rates spurs economic growth but reality does not back this up.

[I]n a persistently low-rate world we could frequently see situations in which the Fed would like to cut its policy rate but will be unable to do so. The result could be subpar economic performance.”

Overall, as a tool of monetary policy, negative interest rates appear to have both modest benefits and manageable costs; and I assess the probability that this tool will be used in the U.S. as quite low for the foreseeable future. Nevertheless, it would probably be worthwhile for the Fed to conduct further analysis of this option.”

A premature increase in interest rates [in the post-Great Recession economy] engineered by the Fed would therefore have likely led after a short time to an economic slowdown and, consequently, lower returns on capital investments. The slowing economy in turn would have forced the Fed to capitulate and reduce market interest rates again.”

Lower interest rates tend to depress economic growth, rather than strengthen it, according to data published by modern central banks. Data provided by the US Federal Reserve Bank, the UK Bank of England, the German Bundesbank, the Bank of Japan and the Reserve Bank of Australia (one of the few central banks that still maintains positive net interest rates) demonstrate that countries with higher interest rates tend to have slightly higher economic growth. [See Figure 1] 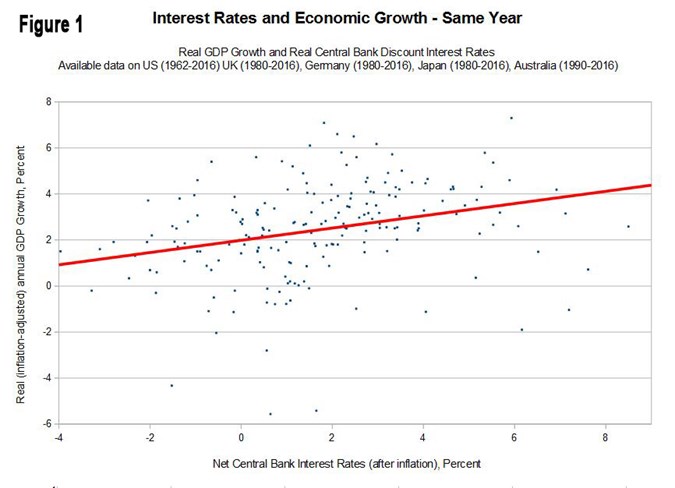 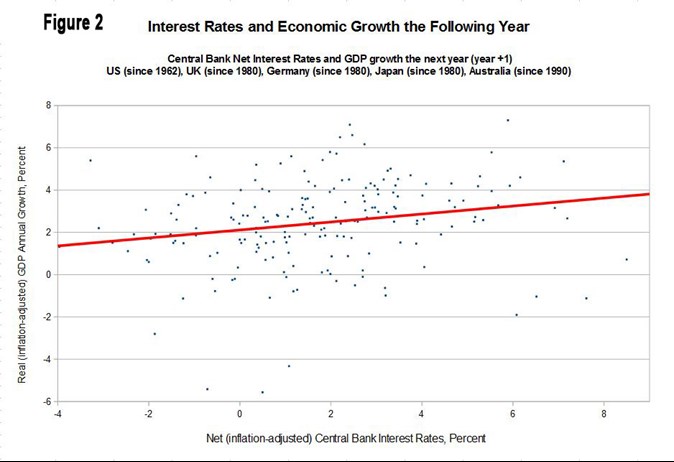 GDP growth rates also show a positive correlation with higher interest rates among the five nations since 2001. [See Figure 3] There is no “end of history” with regard to interest rates being the price of money. 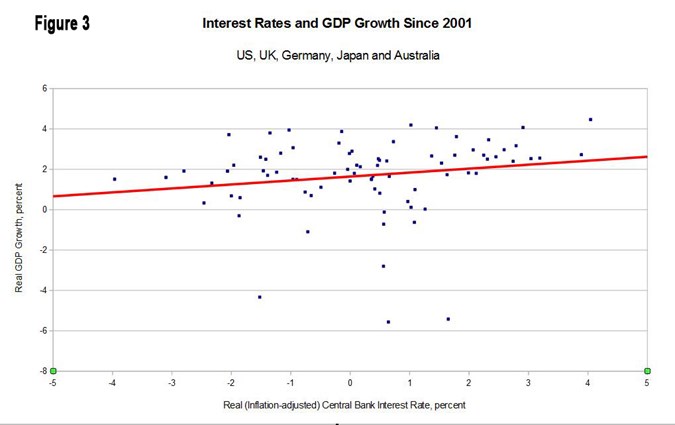 Bernanke claims that “The Fed influences market rates but not in an unconstrained way; if it seeks a healthy economy, then it must try to push market rates toward levels consistent with the underlying equilibrium rate.” But, of course, the above data demonstrates that the Fed has not done this as it has suppressed real interest rates into the negative realm.

Another argument made by economic Keynesians of all varieties is that interest rates should be reduced during recessions in order to lessen the economic loss by stimulating demand. There's not a lot of data points to study among the five nations profiled (21 recession years total) in order to analyze a trend, and it's widely scattered across the graphs [Figures 4 and 5]. But the data shows no clear trend toward lower interest rates making a recession less severe. There's a slight correlation between high-interest rates and less severe recessions in the year interest is calculated, but a slight negative correlation in the year following the establishment of an interest rate.

Even if one cherry-picks the data by ignoring the year the interest rate is set and considers only the Keynesian-favorable data from the recovery year immediately thereafter, a “benefit” of one percent increase in GDP is only gained by decreasing interest rates by more than 10 percent – a change no central bank would ever contemplate. 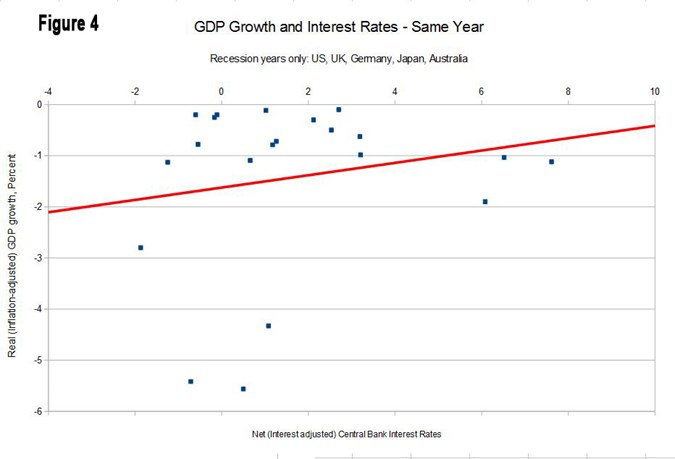 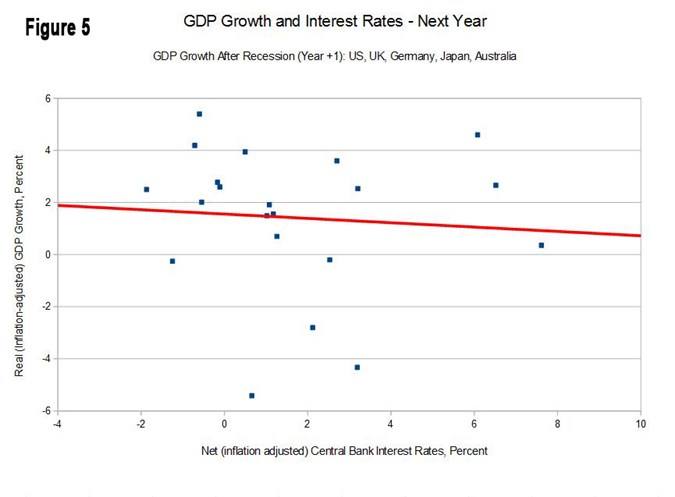 For example, one variable in analysis is population growth. Among the five nations studied in this report, three have experienced modest population growth (US and Australia, and to a much lesser extent, the UK), and two have endured rather severe depopulation (Japan and, until 2012, Germany). Zero percent GDP growth in Japan means most Japanese are getting richer, while zero GDP growth in the United States means that the average American is getting poorer. 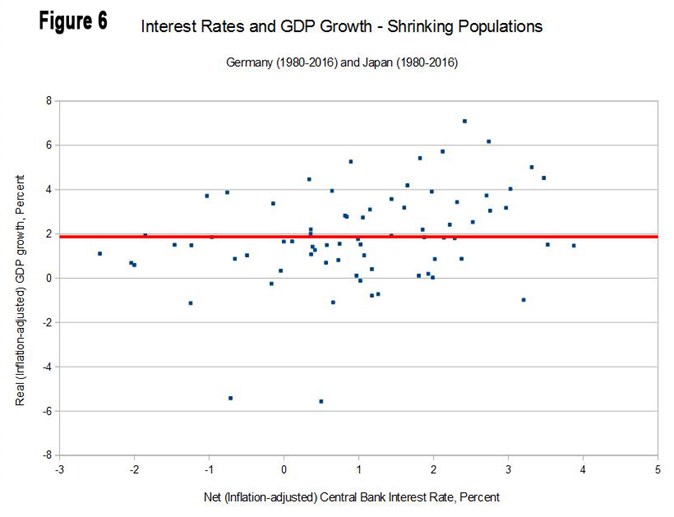 Interestingly, even some Keynesians have acknowledged that the data does not ordinarily support interest rate suppression as a means of stimulating economic growth. A 2017 Bernanke blog post at the Brookings Institute cited a March 2017 study by Federal Reserve economists Michael T. Kiley and John M. Roberts, in which the latter acknowledged:

According to simulations of a recent generation (DSGE) model and the FRB/US model, monetary policy strategies based on traditional simple policy rules lead to poor economic performance when the equilibrium real interest rate is as low as 1 percent, with the ELB [Effective Lower Bound of interest rates] binding between 1/3rd and 2/5th of the time and both inflation and economic activity falling systematically short of desirable levels.”

So with low economic growth resulting from a low-interest rate, what is Kiley and Roberts' response? They argue: The Fed should lower real interest rates down to near zero levels anyway. And they would increase inflation so that these rates could be cut deep into the negative level during a recession or when “potential GDP” is low. Higher inflation would make negative real interest rates socially acceptable by making them appear as if they're not negative. Kiley and Roberts argue that “If a low value of the equilibrium real interest rate causes the economy to encounter the ELB more often, a natural reaction might be to boost the inflation target.”

For Kiley and Roberts, this means increasing the inflation (CPI) target to three percent (from two percent), so that interest rates can be further reduced below zero without appearing to do so to the public.

But if the Federal Reserve Bank's “New Keynesians” call for a bout of higher CPI price inflation as a means of allowing the Fed to lower the Federal Funds rate more during a recession, the result may be higher income inequality. Inflation is attributable to greater income inequality because inflation impacts the poor and working class more directly, as they are likely to hold a higher percentage of their assets in cash (as opposed to the wealthy, whose wealth is largely held in hard assets such as real estate, stocks, etc.).

Indeed, the divergence among national income share in the US that Bernie Sanders so often trumpets on the podium – the gain in share of income by the top one percent – began in 1974-75, immediately after the failure of the Bretton Woods system and initiation of hyperinflation. It was also eight years before the Reagan era tax cuts which much of the left claims is the source of the divergence. Logic dictates that a divergence of income share that began in 1974-75 cannot have been caused by a tax cut that didn't take effect until at least 1982.

The Federal Reserve Bank's “New Keynesians” of 2017 are a lot like the old Keynesians of the 1930s who extended the Great Depression by seeking to suppress interest rates (which is associated with lower economic growth) and increase inflation (which increases income disparity). But free-market advocates can count on leftist politicians like Massachusetts Senator Elizabeth Warren to blame the free market and “corporate greed” for the impact of these government interventions while at the same time backing crony capitalist deals and opposing openness for the Federal Reserve Bank operations which are both inhibiting growth and increasing income disparity.

Thomas R. Eddlem is a freelance writer who has been published in more than 20 periodicals, and a high school history and economics teacher. He’s the author of Primary Source American History, available on TeachersPayTeachers.com and his blog is located at teddlem.blogspot.com.