The Most Important Ballot Measures of 2018

There are a few important ballot measures all over the country being decided this Election Day. Here's the rundown.

The mid-term elections take place on Tuesday and the crowd in DC is focused on who will control the House and Senate. I’ll make my (sometimes dubious, sometimes accurate) congressional predictions next Monday.

The goal today is to call attention to the key initiatives and referendums that also will occur next week.

As a matter of logic, I can’t really argue with the notion that voting is a waste of time. Nonetheless, I hope the right people in certain states will be illogical.

As far as I’m concerned, the most important contest is in Colorado, where voters are being asked to replace the state’s flat tax with a discriminatory system of graduated rates. Here’s how CNBC describes the awful proposal.

Since I’m a fan of the flat tax (combined with TABOR, it helps to explain the state’s prosperity), I obviously hope voters reject this self-destructive scheme to turn Colorado into California.

The second-most important referendum is probably the battle over school choice in Arizona. Here’s how Reason characterizes that battle.

…since we’ve grown accustomed to the idea that governments should mug us in order to fund an army of loyal employees and their fumbling attempts to hammer knowledge into our kids’ heads, attempts to provide widely accessible alternatives to government schooling inevitably involve diverting some of those stolen funds. And diverting those funds requires political battles against entrenched allies of the state monopoly—such as that playing out in Arizona over an effort to expand a school voucher program. …Last year, lawmakers voted to expand eligibility for the empowerment scholarship accounts program to all students, with participation capped at around 30,000 kids. But opponents of school choice won a battle to put the program’s expansion on the ballot as Proposition 305. …As of last week, polling on Proposition 305 conducted by Suffolk University and the Arizona Republic shows a plurality of Arizona voters (41 percent) supporting expansion of the program, with 32 percent opposed and 27 percent undecided.

The third-most important referendum is actually four different measures. There are proposals to expand Medicaid in Idaho, Montana, Nebraska, and Utah.

The Wall Street Journal editorializes about these dangerous initiatives.

One of the worst deals in state spending is coming to a red state near you, and that’s expanding Medicaid to adult men above the poverty line. …Expansion extends the benefit to prime-age adults without children up to 138% of the poverty line. The feds pay more than 90% of the cost for the new beneficiaries… Every state that has expanded Medicaid has blown the budget by spending more money on more people. The cost overruns are more than double on average. …Medicaid is already the fastest growing line item in nearly every state in the country. …The idea that the feds will continue to pick up 90% of the tab forever is fantasy. The GOP has vowed to equalize the funding formula and make states pay closer to 30% to 50% like they do for traditional Medicaid. States shouldn’t assume that Democrats will be more merciful when they want to pay for something else and stick more of the Medicaid bill on states.

The fourth-most important measure to watch is a referendum for a big carbon tax in the state of Washington. The Wall Street Journal opined about this revenue grab.

Two years ago nearly 60% of Washington voters rejected a ballot initiative to impose a “revenue neutral” carbon tax. Green groups opposed the referendum because it wouldn’t generate money for environmental largess. …Liberals have now fixed what they thought was the fatal flaw of the first referendum—namely, revenue neutrality. This year’s initiative would impose a $15 per ton carbon “fee” that would increase by $2 per year. …the $2.3 billion in revenue it is projected to generate over the next five years would mostly be earmarked for “clean air and energy” programs… But revenues are fungible, and the carbon tax proceeds would invariably finance government spending in other areas. …The tax would raise gas prices by 13 cents a gallon in 2020 and 59 cents a gallon by 2035. Washington currently has the third highest gas prices in the country after Hawaii and California… National Economic Research Associates estimates that the tax would cost Washington households on average $440 in 2020 and would reduce state economic growth by 0.4% over the next two years. …liberals care more about increasing tax revenue to spend than they do about reducing emissions.

This is exactly why I warn against a national carbon tax. No matter what proponents say, it will wind up being an excuse to finance even more wasteful spending.

Last but not least, our fifth-most important ballot initiative is from California, which has a very misguided referendum that would allow more rent control in the state. Michael Tanner has an appropriate description of this scheme in National Review.

But the prize for perhaps the worst ballot idea goes — naturally — to California, which will vote on whether to allow local communities to impose rent control. Approval can be guaranteed to benefit the wealthy and middle class while reducing the availability of rental housing for the poor. It’s almost as if the measure’s supporters had never glimpsed an economics textbook.

For what it’s worth, one of the state’s Senators, Kamala Harris, has a national plan to wreck housing markets.

Here are some additional initiatives on taxes which merit a brief mention, particularly since they may have an impact on competitiveness. 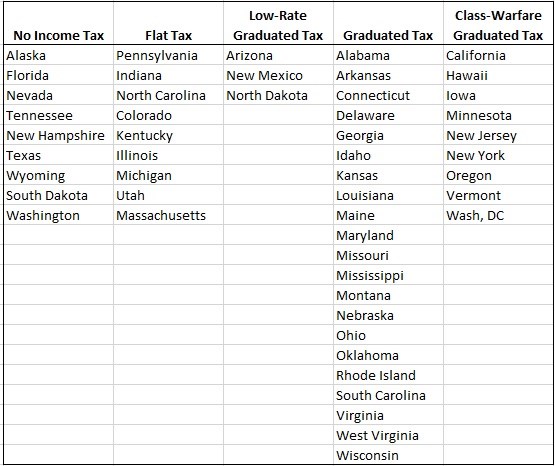 From a libertarian perspective, I’ll also be paying attention to a measure to restrict gun rights in the state of Washington, as well as an initiative to legalize marijuana in Michigan.

There are initiatives to increase the minimum wage in Arkansas (to $11.00 per hour) and Missouri (to $12.00 per hour). If they are approved, the consequences will be both negative and predictable.