The Media Needs to Keep You Angry. Don't Feed Into It

There’s way too much anger right now in that sphere, and much of it is being driven by news media.

I work for a nonprofit whose activities largely center around digital media. But lately, I wish I could just get away from it all. There’s way too much anger right now in that sphere, and much of it is being driven by news media.

The mainstream news media would have you believe that they are just reporting on the anger out there. But they’re actually creating and fomenting it.

The main reason? They need to keep you angry in order to survive.

Digital revenue—from advertising and subscriptions—is now a significant and growing part of news organizations’ budgets. Currently, digital revenue accounts for about $400 million (or 25 percent) of The New York Times’ yearly profit, and its goal is to double that number by 2020. The Washington Post also claims that its digital ad revenue is now a “nine-figure” business.

News media’s digital revenue depends upon keeping people clicking on their stories, and anger is a proven motivator for generating clicks.

News media’s digital revenue depends upon keeping people clicking on their stories, and anger is a proven motivator for generating clicks. It’s been dubbed “rage profiteering.”

As University of Pennsylvania professors Jonah Berger and Katherine Milkman found, “Content that evokes high-arousal positive (awe) or negative (anger or anxiety) emotions is more viral.” Focusing on The New York Times, they found that content that induced anger was much more likely to make it to the site’s “most-e-mailed” list. (See the chart below.) Content that evokes sadness, as you can see, is very bad click-bait. 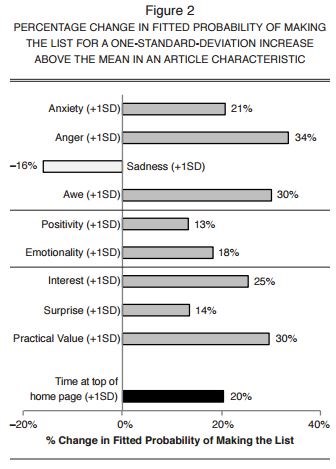 But I also believe that anger is built into the very medium of digital media. In the modern-day classic Amusing Ourselves to Death, former NYU professor Neil Postman made the point that “Each technology has an agenda of its own... a bias.” Television, he claimed, had a bias toward “entertainment.” Regardless of whether the show is Modern Family or the nightly news, it presents all content as entertaining and primarily for entertainment (versus, say, education).

Digital media has a bias (not necessarily its only one) toward anger. A few years back, an article in Scientific American asked the question, “Why Is Everyone on the Internet So Angry?” Art Markman, a University of Texas professor of psychology, made the point that “a perfect storm of factors come together” to produce this emotion among readers and subsequent commenters in the digital space:

First, commenters are often virtually anonymous, and thus, unaccountable for their rudeness. Second, they are at a distance from the target of their anger—be it the article they're commenting on or another comment on that article—and people tend to antagonize distant abstractions more easily than living, breathing interlocutors. Third, it's easier to be nasty in writing than in speech, hence the now somewhat outmoded practice of leaving angry notes (back when people used paper).

According to the Desert Fathers—those early Christian monks who went out to the desert to seek God in solitude—anger is a passion that one falls into when his or her desires are frustrated. (Such as, for instance, the desire for a certain candidate to be elected president.) When the anger abates, as it temporarily must, the individual person then slips into despondency or depression.

That’s where all this anger is headed.