The Fashion House of Artificial Intelligence

Why not apply computer analytics and algorithms to fashion?

We’ve been relying on computers, their analytics, and their algorithms to give us deeper, broader, and faster knowledge of what people want for a long time now. Surveys, browser cookies, user data, and sales trends all tell us an incredible amount of detail. Why not apply this same logic to fashion? 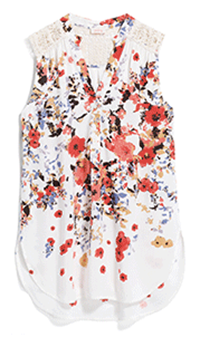 Fashion subscription service Stitch Fix decided to try it last year, and the human-measured results are in: computers are really good designers.

Stitch Fix’s computers identified shirt cuts, patterns, and sleeve styles popular among the company’s subscribers, and mashed them together with some human help to create three brand new shirts. All three sold out.

(I don’t blame them, either. I feel like I’m falling into a stereotype with this, or that I’m officially too predictable, but I’d buy the shirt they came up with. Just look how summery this one is! So classy, so elegant, so cheery, so easy. It’s like an updated-yet-classic-garden-party-that-isn’t-even-stuffy turned into a shirt.)

So Stitch Fix decided to keep it going and design nine more computer-human “hybrid” items this year – this collection including dresses – with a plan to create another couple dozen by the end of the year. That adds up to a grand total of 40-odd original designs, which is comparable to those put out by famous, well-established couture fashion houses in a given season. The items make up less than 1% of the company’s stock, but so far so good.

The idea of artificial intelligence/human creativity hybrids aren’t original to Stitch Fix, but it’s the first time it’s been applied to fashion. Industries like music, graphic design, industrial design, videogames, and special effects have been using AI-human hybrid creativity for a while. Cars are on the “Eventually” list. But it’ll be a If anything, AI creativity will let human designers stay creative while the computers take care of the customer-demanded products.while before computer creativity is really autonomous. However, as tech becomes more and more sophisticated, and as we better learn how to teach and train it, it’s capable of more and more. The tech goal of having true AI creativity gets closer and closer every day.

Will this mean that jobs are taken away? Possibly a few. But, more than any other industry, creative ones are both the most adaptive and the largest. There is no limit to creativity, even when AI is introduced as a competitor. It’s one thing to automate a job like sewing, but you can’t automate the imagination. Human artists aren’t going anywhere. If anything, it’ll let human designers stay creative while the computers take care of the customer-demanded clothing items. Why design for the trend-followers when a computer can do that while you focus on setting the trends?

Hopefully the next stop will be fashion pieces along the lines of a pipe dream I read about as a kid, published in National Geographic Kids about 10 years ago (I wasn’t kidding when I said I was a kid), that sounded so great I still haven’t forgotten it: someday, we could have fabric that mends itself, is truly stain-proof, and adjusts itself according to the temperature of the air around it to regulate body heat.

I’m all for robots contributing to New York Fashion Week, but I’m more than willing to put that off a few years if it means shortening the time between now and when I can have t-shirts that fix those annoying little holes they get down at the hem (you know what I mean), jeans that keep up with me as I fly from the Deep South to the Far North and back (because I’m insane), and socks that mend themselves when I snip the fabric as I cut off the sales tag (please tell me I’m not the only one).

Until then, I'll be content with garden party shirts that don't make me look like a doily, dresses that leave human designers time to exercise their creative power without necessarily pandering to the masses, and watching AI computers dramatically compete with each other for spots in New York Fashion Week. Let the games begin.