The Euro Is Not Long for This World

Brexit may have triggered the fall of the Euro

The European Union (EU) is reeling under a heavy blow dealt by the United Kingdom’s departure (“Brexit”). More fundamentally, the impact has rocked the very foundations on which the single currency was built.

Recall, if you will, the ideas put forth to legitimize the euro's introduction by merging diverse national currencies into a single legal tender in early 1999. According to the crowding theory, the euro was meant to be introduced once there was sufficient economic harmonization or convergence among participating nation-states. The alternative was the cornerstone theory, whereby the euro was to compel adopting nation-states towards economic and political integration.

The Euro was meant to harmonize and compel participating nation-states towards integration. Neither happened.Neither theory panned out. Rather than growing closer, nation-states are drifting apart; the case for a single currency has not been strengthened but weakened. Many countries simply lack the discipline needed to adapt fiscal and economic policies to the demands of a stable common currency, and several were lured in by a very juicy carrot: a far too lax monetary policy.

The European Central Bank's (ECB) policy triggered a colossal credit boom, particularly in countries on the periphery of the euro zone. These countries went broke when the inevitable bust came.

To prevent payment defaults on a grand scale, the ECB has pushed interest rates into negative territory. Listen closely and one can almost hear those electronic presses humming away in the ether, printing up piles of digital cash to keep credit flowing.

The ECB buys government bonds with newly created euros. This may provide some short-term relief for overstretched debtors, but it wreaks political havoc in the euro zone.

Dragged Down by Banks

A partial breakup or outright dissolution of the EU has suddenly become a possibility, and where the EU goes, the euro is sure to follow. This puts tremendous pressure on euro zone banks, which do their business across borders. 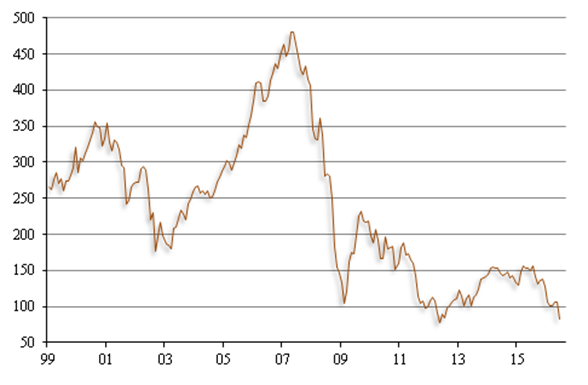 It also poses some tough questions for investors: What happens to bank deposits, debentures and bank equity's value if the euro puzzle is in pieces?

If euro banks start defaulting on their payment obligations, the euro's demise could be instantaneous. The ECB has already stepped in to prevent this, showering banks with new credit at astonishingly favorable rates.

The European Central Bank is on an epic monetization spree.The ECB is poised to ramp up its balance sheet, potentially bringing it to around 3.9 trillion euros by March 2017. The central bank has since June of 2016 been issuing new credit to banks at minus 0.4 percent interest, provided they lend the money to consumers and corporates.

Negative ECB lending rates help bolster banks' equity capital. This is why the notion that the ECB could push its lending rate even further into the cellar no longer seems so far-fetched. This would compound the pressure on market interest rates.

The fact is that the ECB is on an epic monetization spree. It has been buying 80 billion euros worth of bonds a month, which could increase the euro base money supply to around 1.7 trillion by March 2017.

That's not the whole story, though. If the ECB starts monetizing debentures issued by banks, the base money supply could gradually rise by another 3.8 trillion euros.

The problem really is the euro zone’s outsized banking apparatus, whose balance sheet accounts for 314 percent of GDP – comparing with just 86 percent in the United States of America. 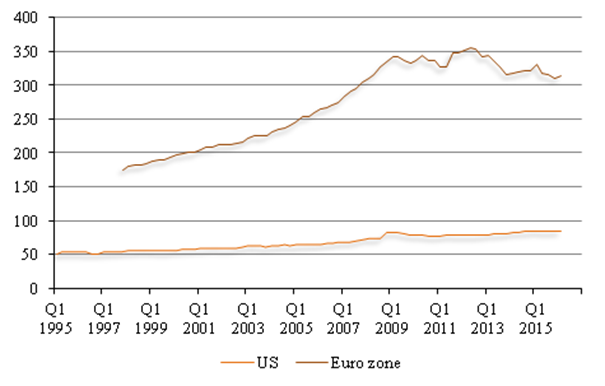 Inflation Genie Out of the Bottle

Chances are that printing up piles and piles of euros to prevent defaults on a colossal scale will eventually erode confidence in the currency and conjure the spectre of inflation. It appears that the ECB is more concerned about keeping struggling borrowers afloat than buoying the euro's buying power. When this realization dawns, financial market players certainly won't be uncorking the celebratory champagne.

Forget the fizzy stuff; it will be the inflation genie that comes out of that bottle.

The consequences would likely be global. Most, if not all, major currencies have one thing in common with the euro: They are unbacked paper money, the quantity of which can be increased any time in any amount deemed politically expedient. If the euro's internal and external buying power is debased, doubts about the quality of other unbacked paper currencies will surely arise.

Most national currencies are threads in the global monetary tapestry, so the ECB’s patchwork euro rescue could eventually unravel the world’s system of unbacked paper currencies, making the currencies worth less.