In practice unions often act in their own interests.

Unions claim to represent the interests of workers against the interests of employers. In practice unions often act in their own interests. For example, in collective bargaining it is not unusual for a union to forgo wage increases in exchange for the employer agreeing to force those workers to pay union dues or agency fees as a condition of continued employment. Recently the National Labor Relations Board, which was originally conceived as a neutral referee in labor disputes, has taken the side of unions against employees.

In August 2011, a bill to defend workers against unions was introduced in the Senate (S. 1507, by Orrin Hatch) and the House (H.R. 2810, by Tim Scott). The proposed Employee Rights Act (ERA) would make seven significant changes to American union law. The supporters of the bill commissioned Opinion Research Corporation International (ORCI) to sample public opinion on the bill’s seven provisions.

First, the ERA would make secret-ballot elections the only way for unions to be certified as exclusive (monopoly) bargaining agents. (The Obama administration favors card check over secret-ballot union elections.) The table below shows ORCI poll support for secret ballots. Some may be amazed that overall support is 78 percent among all households and union households alike; but insofar as unions are seen to look out for their own interests over the interests of workers the result is not surprising.

Second, the ERA would ensure that in a certification election all parties would have at least 40 days to make their arguments. The table below shows support for a 40-day hearing period. The data speak for themselves.

Third, currently once a union has been certified as the monopoly bargaining agent over a group of workers, it is presumed to continue to have majority support among the workers indefinitely. There is no regularly scheduled reelection to determine whether the union continues to be supported by the workers. There is a decertification election process, but its rules severely handicap any workers who want to get rid of the monopoly bargaining agent. Individual workers have to declare publicly that they want to decertify the union and seek out like-minded colleagues. Intimidating face-to-face encounters with union bosses cannot be avoided. Employers are forbidden to help. Because of this quirk in the law only 10 percent of workers represented by a monopoly bargaining agent actually voted for it.

The ERA would require that once a union is certified as a monopoly bargaining agent it would have to stand for reelection every three years. The following table shows support for that proposition. Again there is strong overall support among union households as well as all households.

Fourth, the ERA would substantially increase the ease with which workers could vote to decertify their monopoly bargaining agents. A substantial majority of union households, according to the next table, are concerned about being stuck with unwanted unions.

Fifth, except in the 23 states that prohibit it, workers who are represented by a monopoly bargaining agent can be forced to pay union dues or agency fees as a condition of continued employment. To a large extent unions turn those forced payments over to politicians who promote compulsory unionism. Many dues payers do not support the political candidates favored by union bosses. The ERA would protect them against involuntary political contributions.

Even union households don’t like unions to abridge their freedom of political speech. 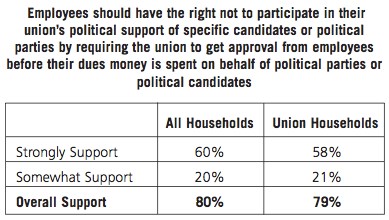 Sixth, in U.S. v. Enmons (1973) the Supreme Court ruled that acts of violence by a union, if they promote legitimate union purposes in a labor dispute, do not violate the federal antiracketeering Hobbs Act. This is one of the Court’s most egregious end-justifies-the-means rulings. The ERA would reverse that error. According to the next table, union households recognize that violence by unions is, well, violence.

Seventh, present law leaves it up to individual unions to decide if they can call a strike without having workers vote to determine whether they approve of the strike. The ERA would make a secret-ballot election among all workers represented by a union, not just its members, mandatory before any strike could commence. Once again, even union households support employees over union bosses.

In the present Congress I expect the ERA to pass the House and to be ignored in the Senate. But a new Congress will be seated in 2013. Perhaps it will seize this opportunity to defend employee rights over union interests.