Unions Aren't as Popular as the Polls Would Have You Believe

Unions actually have little to be happy about this Labor Day.

On Wednesday, August 30th, Gallup issued a new poll on public attitudes toward labor unions. It reported that 61 percent of those polled “approve of labor unions.” Richard Trumka, president of the AFL-CIO, cited the poll as cause for a “happy early Labor Day.” But Mr. Trumka actually has little to be happy about this Labor Day.

Don't Be Misled by the Polls

Notwithstanding this apparent public “approval” of unions, only 10.7 percent of all American workers and only 6.4 percent of private-sector workers, are union members. Those are the numbers upon which Mr. Trumka’s dues-and-fees revenue depend. And there is little chance they will increase anytime soon.

The following chart shows that union membership rates have been falling steadily since 1983. 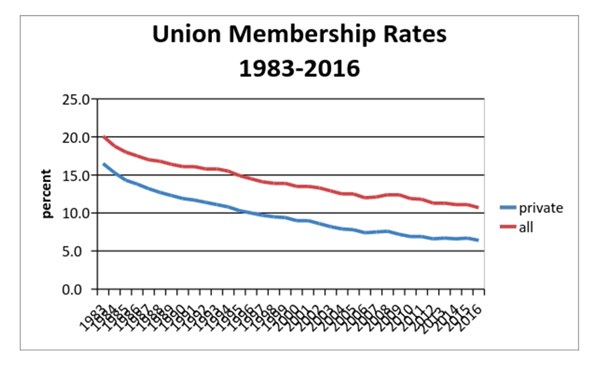 Gallup didn’t report union-approval rates every year until 2001, but the following chart shows the rates from 1985 through 2017 as reported in its new poll. 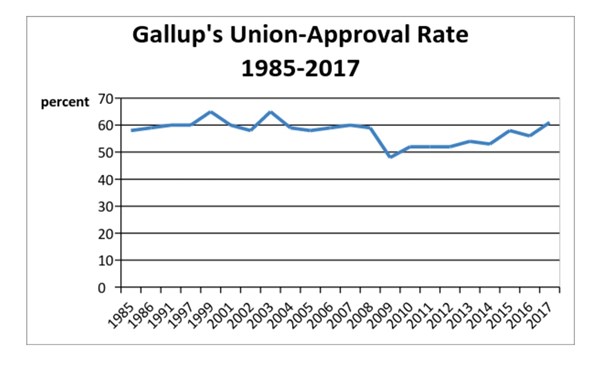 The high was in 2003 (65 percent), and the low was in 2009 (48 percent). It has been slowly increasing since. There is no correlation between union approval and union membership rates.

What Do These Numbers Mean?

So, what does the current 61 percent public approval number mean? Nothing at all.

The question Gallup asked was, “Do you approve or disapprove of labor unions?” Public education has helped perpetuate the hoary myth that American unions were a positive force in building and maintaining a strong middle class. Considering this, I am not surprised most respondents would indicate approval of unions, not any particular unions, but the very idea of unions.

If Gallup asked if their respondents approved or disapproved of unions having the power to represent workers against their will, I would be surprised if more than 10 percent would approve.

Mr. Trumka would not want Gallup to ask such a question. Nor would he like Gallup to ask the 89.7 percent of workers who are currently in union-free employment whether they would approve of switching to union-impaired employment. For those workers it is clear that Labor Day is not Union Day.