Tariffs Hurt the Poorest the Most

America’s low-income households benefit the most from free trade and having access to cheap imports. 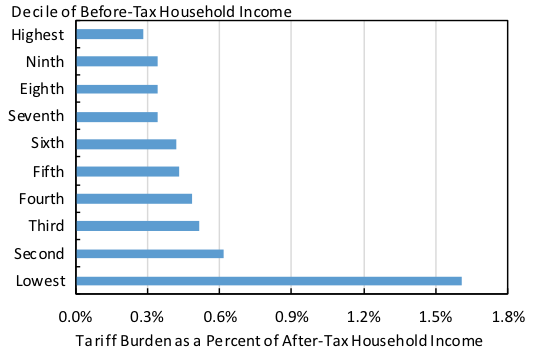 The chart above displays the estimated burdens of trade tariffs (as a share of after-tax household income) on US households by income deciles. It represents graphically the main conclusion of a new research article “US tariffs are an arbitrary and regressive tax” by economists Jason Furman (Chairman, Council of Economic Advisers), Katheryn Russ (UC-Davis), Jay Shambaugh (Council of Economic Advisers), emphasis mine:

Tariffs – taxes on imported goods – likely impose a heavier burden on lower-income households, as these households generally spend more on traded goods as a share of expenditure/income and because of the higher level of tariffs placed on some key consumer goods. We estimate the tariff burden by income group and by family structure using a new dataset constructed by matching of granular data on trade and consumer spending. The findings suggest that tariffs function as a regressive tax that weighs most heavily on women and single parents.

We match import duties to standard consumer expenditure data to take a more detailed look and find evidence that low- and middle-income households do, indeed, spend a higher fraction of their income and non-housing expenditure on tariffs. The findings indicate that tariffs act as a regressive tax on American consumers and are distortionary in their variation across products.

Based on this initial analysis, it appears tariffs are imposed in a regressive manner – in part because expenditures on traded goods are a higher share of income and non-housing consumption among lower income households, but also due to explicit regressivity within categories.  The analysis highlights an underexplored aspect of trade policy and its effects and leaves open a path for subsequent research. More research on this area would be welcome – and the new dataset created for this analysis hopefully will help further some of that research.

Bottom Line: The economic lessons here are: a) America’s low-income households benefit the most from free trade and having access to cheap imports because they spend a greater share of their budgets on traded goods like clothing, footwear, household items, school supplies, appliances, toys, and furniture (think Walmart shoppers), and b) America’s low-income households have the most to lose from greater restrictions on free trade with import quotas, protective trade tariffs, border taxes, and other trade barriers. If Trump starts a trade war with tariffs and border taxes, it will be a “war on the poorest Americans,” as Johan Norberg explains in the video below “Unequal Benefits of Trade” (MP: and unequal burdens of tariffs).