Suppose the Declaration Was Written in Google Docs

And think of all the legacy drama we could have been left with.

The Declaration of Independence could be seen as the most perfect political document in history, inspiring millions of people for generations to fight for liberty against tyranny. But what if it had been written with Google Docs?

No collaborative project is written without Google Docs now so it's incredible to think that, in just 17 days, Thomas Jefferson could have brushed up on John Locke, written his initial draft, had it edited by the rest of the Congress-appointed Committee of Five (Benjamin Franklin, John Adams, Roger Sherman, and Robert Livingston), and re-written it, all before sending it to the dozens of other members of Congress for further alterations, without tearing his hair out.

All the changes were the same as what we change in Google Docs today: synonyms, commas, and replacing ampersands.Looking at the original draft compared to our final edition, we can see that most of the changes are exactly the kinds of thing we correct in Google Docs: switching out words for synonyms, taking out and adding commas, and replacing every single ampersand with the word "and."

Of course, it’s much more commanding to have a nation-founding document written on parchment with iron gall ink rather than printed on mass-produced paper with an inkjet printer, even if you do download the US Declaration font, but really. The ROI is not worth it.

First of all, parchment, ink, and quills weren’t the cheapest or easiest things. For all we know, everyone wanted more drafts written but didn’t feel like making new quills or were too broke to buy more paper. So we could be left with a subpar document that’s determined the lives of millions and millions of people. If they had used Google Docs, we’d see that discussion in the attached Chat. No more guessing.

The Chat would have another, even better function for us: we’d be able to see Benjamin Franklin and Thomas Jefferson’s arguments with each other in the Committee of Five’s initial draft. 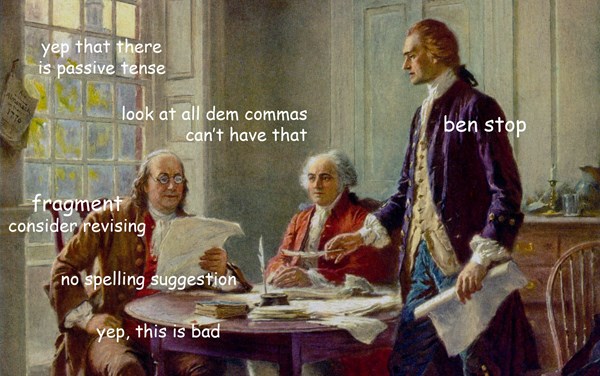 Poor John Adams, patiently waiting to get a word in. Roger Sherman and Robert Livingston apparently just gave up and didn’t even bother to join the portrait session while Franklin was there. If they had used Google Docs, Adams could’ve just typed his thoughts into a separate Chat box, then copied and pasted it into the main Chat as soon as Franklin and Jefferson took a moment to nurse their carpal tunnel. Sherman and Livingston could have contributed more obviously. But no.

The whole Declaration could’ve been drafted, edited, revised, finished, sent to King George III’s inbox (CCing [email protected]), and received back with scathing comments (forgetting to hit Reply All), all in the same time it took the members of Congress just to convene in Philadelphia to edit the thing. Jefferson could’ve had more than 17 days to write his first draft, since the edits and ensuing second draft wouldn’t have taken as long. On the other hand, it may have been longer if he’d had extra time, so it’s probably best this way. No one likes long documents (*side eye at modern politics*).

And think of all the legacy drama we could have been left with once the Founding Fathers figured out that Docs didn't retain Chat history, but Gmail did:

Thomas Jefferson (VA) and John Adams were still friends at the time and would have been chatting amiably about how awesome John’s wife Abigail was.

John and Samuel Adams (MA) would have been bickering, as families do.

Benjamin Harrison (VA) would have been cracking jokes about his weight to lighten the mood created by the Adams cousins.

Ben Franklin (PA) would have replied on paper for the world to have on record, rather than in legend, to Hancock’s comment that they must all hang together: "Yes, we must, indeed, all hang together, or most assuredly we shall all hang separately."

Stephen Hopkins (RI) would have been telling everyone “I told you so” after telling Paul Revere and others that “The gun and bayonet alone will finish the contest in which we are engaged.”

John Morton (PA) would have been very pleased with himself since his vote was the one that pushed the Declaration into being.

Robert Treat Paine (MA) would have been making trouble, disagreeing with everything everyone said.

Caesar Rodney (DE) would have been reveling in his ability to stay at home in bed, tending to his asthma and facial cancer, rather than having to ride the 80 miles all the way from Delaware to Philadelphia to break the stalemate vote on the passing of the Declaration.

Edward Rutledge (SC), the youngest signer, would have been shushed by his uncle Arthur Middleton (SC), who would have been loving the opportunity to make life difficult for the Brits.

Thomas McKean (DE) would have been late in joining the document, and proceed to lord himself over everyone else and argue with George Read (DE).

Joseph Hewes (NC) would have been excitedly interrupting people’s editing and annoying everyone, especially John Adams, to ask what else he could do to Advance the Cause of Freedom, anything from donating his own ships to nominating his friend John Paul Jones to a military position.

William Floyd (NY) would have been that annoying group member who’s fine with “whatever everyone else wants.”

William Hooper (NC) was that one guy who shows up to the pre-meeting, and then shows up again after the thing is done, so we wouldn’t have gotten any drama from him.

Samuel Chase (MD) would have been causing trouble, setting up side chats to get insider’s knowledge and being vulgar in the comments.

Philip Livingston (NY) would have been agreeing that taxation is theft, but trying to make the Adams cousins calm down and be more peaceful. They would have started typing at him in all caps, and he would have responded to stop shouting before they woke his wife.

William Paca (MD) would have switched between letting others take the lead, and taking the lead himself, particularly when the opportunity to make things more theatrical presented itself. (Thomas McKean would probably not have approved such spectacle.)

Richard Henry Lee (VA) would have been privately messaging everyone pep talks, trying to get everyone more excited about his plan to be independent of Britain.

Roger Sherman (CT) would have been one-wording everyone after helping draft the Declaration.

George Wythe (VA) would have been messaging Jefferson privately, giving him advice and continuing his mentorship for us to learn from ourselves.

Josiah Bartlett (NH) would have been that group member that’s also doing about half a dozen other side jobs and volunteer efforts, and enthusiastically throwing himself into all of them.

Thomas Stone (MD) would have been privately messaging everyone to quit mentioning his name because he wasn’t actually supposed to be supporting this.

Lyman Hall, Button Gwinnett, and George Walton (GA) would have been freaking out over being the first to represent their colony in Congress. Hall would have been particularly excited since he was the one who convinced his colony to send representatives after missing out on the First Continental Congress and was then chosen himself to go as a delegate. All the Virginia delegates would have been rolling their eyes from the privacy of their own bedchambers until finally they had enough and said, “Alright we get it now stop virtually bouncing off the walls.”

Lewis Morris (NY) would have been getting all fired up until he finally messaged “Damn the consequences, give me the e-signature thing.”

Thomas Nelson, Jr (VA) would have been keeping tabs on military developments and checking with his predecessor Patrick Henry on the side.

Robert Morris (PA) would have been quiet since he voted against independence.

Francis Lewis (NY) would have been distracting everyone with stories about his imprisonment first of the Native Americans and then in France for being a British mercantile agent during the French and Indian War.

Delegate John Dickinson (PA) would have removed himself from the Declaration doc after sending out a 10-page, comment-only document which failed to convince everyone not to declare independence. In that document, on about page eight, Stephen Hopkins (RI) would have commented “What is this” on a random paragraph, and John Penn (NC) would have begun to respond to the comment, explaining how Google Docs works. Hopkins would have “rejected” the comment and sent another, saying, “I know how it works, I’m just tired of Dickinson’s long-winded harangue!” Subsequent comments in the Declaration doc would be consciously kept short to avoid another outburst, and Hopkins would keep his well-intended advice to himself.

Carter Braxton (VA) would have been complaining about how Peyton Randolph had to go and die, forcing Braxton into his Congressional seat, and fighting with John Adams about how moderate versus radical the whole thing should be.

Abraham Clark, John Hart, Francis Hopkinson, Richard Stockton, and John Witherspoon (NJ) all would have had a private group chat where they talked about how much better they were than their colony’s previous, independence-hating, First Continental Congress delegates.

Thomas Lynch, Jr (SC) would have been sick but trying to play catch-up on behalf of his father, who was also a delegate, and also sick.

Samuel Huntington (CT) and George Clymer (PA) would have been the quiet ones.

Benjamin Rush (PA) would have been messaging John and Samuel Adams about their days in the Sons of Liberty.

Charles Carroll (“of Carrollton”) (MD) was just returned to Maryland from a diplomatic mission to Canada at the time of the Declaration’s vote, but when he had internet access he would have been checking on the doc’s progress and restating why it was all necessary, and as soon as he was elected a proper delegate he would have gotten online promising to sign it.

William Whipple (NH) would have set everyone straight at the very beginning with one of the doc’s first comments: “Nothing less than the fate of America depends on the virtue of her sons, and if they do not have virtue enough to support the most Glorious Cause ever human beings were engaged in, they don’t deserve the blessings of freedom.”

William Ellery would have seen Hancock's size 24 signature, and signed himself in size 20.Elbridge Gerry (MA) would have been privately messaging those delegates he saw were unsure of whether or not to support independence, working to convince them to support liberty. John Adams would have heard of these messages in other private messages (gossip was a thing then too), and he would have taken to the main chat to publicly praise Gerry: “If every Man here was a Gerry, the Liberties of America would be safe against the Gates of Earth and Hell." (Takeaway: be a Gerry.)

William Ellery (RI) would have seen Hancock’s size 24 signature, and signed himself in size 20.

Presumably, if the Declaration of Independence had been written on Google Docs, then the Constitution would’ve been as well. How much easier would it be for judges to rule on Constitutional issues if they had the editing history? We could all look at the previous writings, seeing what had been crossed out and debated, and say, “See? They addressed exactly the same issue we’re having now, but they took it out. Not only that, but Thomas Paine hacked Benjamin Rush’s account and commented that that would be a stupid thing to do, and John Adams agreed. So we can’t have that.”

And we could have had all those side discussions of everyone’s performance during the war!