Competition in the taxi industry is making its way through Spain.

Economic theory tells us that barriers to entry in a particular sector tend to push prices up. In addition to increased costs, these restrictions also reduce the quality of the goods or services provided by incumbent companies and slow down the emergence of disruptive innovations.

Spain's taxi industry has traditionally been heavily regulated by its government.

These barriers often result from restrictions on competition. The regulations themselves are imposed by governments through laws and regulations. This allows for the formation and consolidation of monopolies and oligopolies that end up harming consumers.

This is exactly what’s happening in Spain with taxis. The taxi industry has been traditionally regulated via government licenses. The artificially-limited supply of licenses has resulted in the creation of a well-established oligopoly of taxi companies that have controlled the market over the last few decades. Due to this supply shortage, the price of licenses in the secondary market (licenses are granted by public administrations for ridiculous fees) has skyrocketed over the last fifteen years. 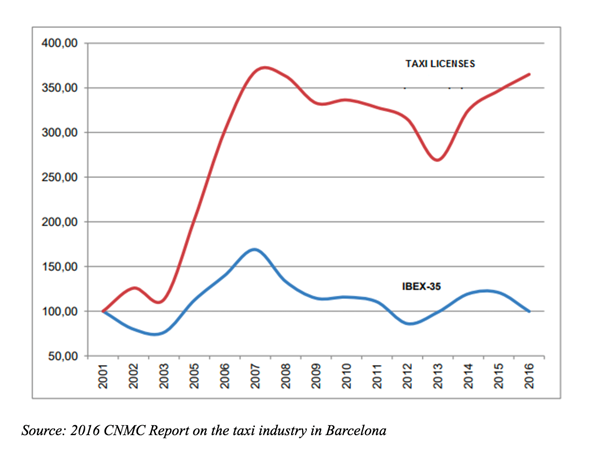 In addition, the monopolistic position of taxis has led to overpricing in the sector. The CNMC (the Spanish authority responsible for preserving competition) estimates that entry barriers have increased prices  by 12 percent; a conservative estimate, according to the CNMC itself, since it does not take into account “unproductive inefficiencies and dynamics resulting from a non-competitive environment and the cost in terms of waiting time in comparison with a situation of freedom of entry and price."

Uber has contributed to a decline in alcohol-related traffic accidents.

In 2009, the Spanish government carried out partial liberalization of the sector, which abolished the restrictions imposed upon private hire vehicle (PHV) companies. Particularly, it got rid of the 1/30 ratio (1 PHV license per 30 taxi licenses) that had regulated the market until then. Yet it was not until a few years later, with the emergence of technology-based PHV companies, that taxi drivers saw their position threatened by competition.

The first clash between taxi drivers and these new competitors took place in 2014, resulting in the ban of the most popular service offered by Uber: UberPop. UberPop was just an app that connected non-professional drivers with potential passengers. Yet Uber fought back by releasing a PHV service in Spain with licensed, professional drivers that could be hired via mobile. Other companies like Cabify were already offering similar services in Spain since 2011.

What do monopolies do when they see competition coming? Simple: they lobby governments to protect their interests. As a result, in 2015 the 1/30 restriction was reintroduced. However, it was too late. The 2009 reform had sent the number of PHV licenses through the roof, reaching 16,000 by the end of the year, and significantly increasing the 1/30 ratio initially established.

Taxi organizations have gone on strike four times in the last five months, participating in several violent incidents including the harassment of Uber and Cabify drivers. They claim that PHV companies are breaking the law by picking up passengers on the street (they are supposed to offer only on-demand services). Even if this were true, both this restriction and the 1/30 ratio do not seem to be justified if the intention is to establish a framework that boosts competition and modernizes the sector.

Cab companies have gone on strike four times in the last five months.

This is what the CNMC pointed out in a formal complaint presented before the Supreme Court against these unfair legal restrictions. The competition authority argued that “these barriers limit the entrance and capacity to compete with PHV companies; reduce competition in the urban transport market; and negatively affect  prices, quality, innovation and, ultimately, general welfare.”

New York City provides a great example regarding the benefits derived from the introduction of competition in the taxi sector. In the case of New York, benefits for consumers are not so much captured in prices (tariffs do not vary too much between Uber and Lyft on the one hand and yellow cabs on the other) but in other equally important aspects.

First, Uber and Lyft tariffs are responsive to changes in demand up-to-the-minute, which incentivizes drivers to go out during rush hours, increasing the probability of finding a cab. In addition, a recent paper echoed by The Economist finds that the introduction of Uber has resulted in a decline in alcohol-related traffic accidents by between 25 and 35 percent. Other benefits brought about by competition are the introduction of easy-to-use mobile apps or the newly-created carpooling services (UberPool and Lyft Line), which could potentially have a positive impact on New York traffic.

Despite all obstacles, it seems that competition in the taxi industry is making its way through in Spain. Taxi lobbies are just trying to avoid the inevitable. The sooner governmental authorities realize about this, the faster consumers will take advantage of the benefits of competition in one of the most heavily-regulated sectors of the Spanish economy.