No, CEOs Don't Make 350 Times More Than Their Employees

That statistic is based on pure numerical chicanery.

Any day now, the AFL-CIO’s Executive Paywatch division will report another one of its wildly inflated CEO-to-worker pay ratios for 2017 based on a series of flawed statistical assumptions that result in a rather meaningless apples-to-oranges comparison. See my criticisms of the AFL-CIO’s report last year here, here, and here.

This year, the Wall Street Journal just published CEO compensation online for all of the S&P 500 companies along with several related articles in today’s print and online editions here, here and here. Therefore, this year I’m able to preempt the AFL-CIO and publish a rebuttal to its anticipated massively inflated 300+ CEO-to-worker pay ratio before its analysis is released, instead of responding to their report after it has gone public and gets widely and blindly reported by the media without anyone (except John Merline of IBD) ever questioning “the statistical legerdemain used to produce it” (see below). 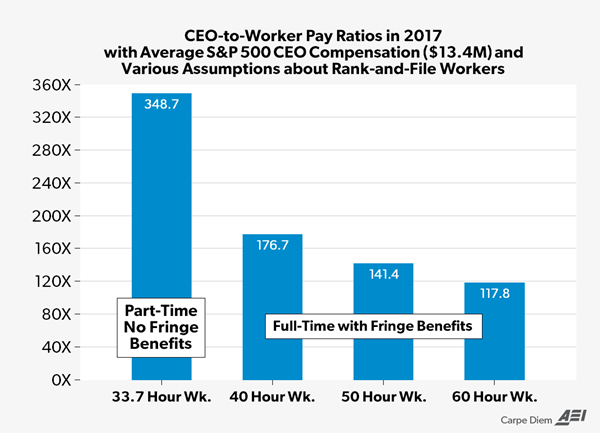 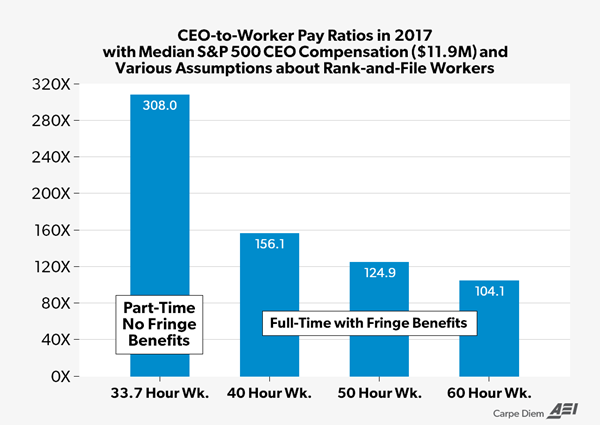 As I have reported many times before, here is a summary of the main flaws in the “methodology” used by the AFL-CIO to produce its wildly inflated 300+ CEO-to-worker pay ratios every year:

The analysis below summarizes my corrections for those statistical flaws above that are used by the AFL-CIO annually to get an exaggerated, inflated CEO-to-worker pay ratio:

The average annual income earned by rank-and-file workers is taken from the U.S. Bureau of Labor Statistics Current Employment Statistics survey. Specifically, it is the average hours and earnings of production and nonsupervisory employees on private nonfarm payrolls. The average weekly pay is multiplied by 52."

Here are more details of how the AFL-CIO will calculate average worker pay this year if it follows its procedure in previous years. It will use an average hourly wage of $22.05 for production and nonsupervisory workers in 2017 (BLS data here) and an average workweek of only 33.7 hours (BLS data here) for the average rank-and-file worker. Assuming 52 weeks of work per year: $22.05 per hour x 33.7 hours per week x 52 weeks ≈ $38,640 average annual cash-only earnings for the typical part-time worker in 2017. Conveniently, the fringe benefits that all rank-and-file workers, even part-time workers, receive as part of their total compensation are mysteriously not considered by the AFL-CIO.

Therefore, the AFL-CIO engages in some questionable statistical chicanery by sloppily reporting an apples-to-oranges comparison of (a) total CEO compensation for only about 500 CEOs working full-time in their prime earning years to (b) the cash wages only for 102.5 million rank-and-file workers of all ages working for companies of all sizes, who work an average of less than 34 hours per week, and are therefore working part-time, not full-time, on average.

But you would never know that from the AFL-CIO’s website because the average hourly pay and average hourly workweek of rank-and-file workers are never reported, and I guess nobody has ever bothered to check to find out that the AFL-CIO is using average annual cash-only income (excluding fringe benefits) for a mix of full-time and part-time employees whose average workweek was only 33.7 hours last year.

Question: How would the AFL-CIO’s CEO-to-worker pay ratio change if we (a) calculate average worker pay for full-time workers, (b) compare the average pay for a rank-and-file worker who works the same number of hours that a typical CEO works, e.g., 50 or 60 hours per week, (c) compare total compensation of both CEOs and rank-and-file workers working full-time including fringe benefits for the rank-and-file, (d) use median instead of average CEO compensation, and (e) consider only those workers who are employed by companies with 500 or more workers to consider the workers most likely to actually work for an S&P 500 company? The charts above summarizes how the CEO-to-worker pay ratio would change, here are the details:

1. Correcting for the AFL-CIO’s Statistical Shortcomings/Legerdemain

b. Assuming a 40-hour workweek for full-time rank-and-file workers employed by companies with 500 or more workers, who received average hourly compensation of $36.65 last year including fringe benefits (BLS data here), and annual total compensation of $73,300, we would get a CEO-to-worker compensation ratios of 177-to-1 using average CEO compensation and 156-to-1 using median CEO compensation. In other words, the AFL-CIO’s CEO-to-worker pay ratio is conveniently inflated by a factor of 2X by using cash wages only for part-time workers! Talk about bogus statistical chicanery! And year after year, the media never questions the AFL-CIO’s totally flawed methodology and parrots the inflated and wildly exaggerated CEO-to-worker pay ratios.

Those more accurate comparisons result in CEO-to-worker compensation ratios of between 177-to-1 to as low as 104-to-1.

c. Since no S&P 500 CEO works only 40 hours per week, let’s assume a 50-hour workweek for full-time rank-and-file workers to make a more realistic comparison, and use hourly compensation of $36.65, like above, and annual total compensation of $95,290 for workers employed by companies with 500 or more employees. That would result in CEO-to-worker compensation ratios of 141-to-1 (average CEO pay) and 125-to-1 (median CEO pay), see charts above.

d. To make it an even more realistic comparison to the average workweek of an S&P 500 CEO, let’s assume a 60-hour workweek for full-time rank-and-file workers and annual total compensation of $114,348 we would get CEO-to-worker compensation ratios of 118-to-1 and 104-to-1 for average and median CEO pay respectively.

Let’s keep this analysis in mind in the coming weeks when the AFL-CIO’s reports something like another 350-to-1 CEO-to-pay ratio that will generate sensationalized media coverage even though it is hugely exaggerated by a factor of at least 2X and probably more realistically inflated by an AFL-CIO-to-reality ratio of 3.5-to-1!

2. Confiscation and Redistribution of CEO Pay

And what’s the whole point of the AFL-CIO’s annual reports on wildly inflated CEO-to-worker pay ratio? The sub-title of last year’s AFL-CIO’s Executive Paywatch report pretty much sums it up: “More for Them, Less for Us.”

The AFL-CIO’s message seems to be that if CEOs weren’t being so generously over-compensated, then the rank-and-file workers would be doing much better and making higher wages. For example, according to the AFL-CIO in 2015:

America is supposed to be the land of opportunity, a country where hard work and playing by the rules would provide working families a middle-class standard of living. But in recent decades, corporate CEOs have been taking a greater share of the economic pie while workers’ wages have stagnated."

The AFL-CIO has fallen here hook, line, and sinker for the zero-sum, fixed pie fallacy, one of the most common economic mistakes that falsely assumes that there’s a static, fixed pie and, therefore, one party can gain (get a bigger slice) only at the expense of another (who’s left with a smaller slice). But let’s assume that there is a “fixed pie of wages” and do some confiscation and redistribution of CEO compensation to see how that would affect average rank-and-file worker pay.

Q: If the CEOs of the S&P 500 companies received $13.47 million on average last year, then as a group, those 503 CEOs in the WSJ database received about $6.77 billion in total compensation in 2017. If the AFL-CIO could wave a magic wand and confiscate that entire amount and redistribute $6.77 billion to the current 103,457,000 rank-and-file workers, what would each one get?

A: An annual increase in pay of about $66 for each rank-and-file worker before taxes, or about $1.27 more per week and only 3.2 cents per hour. In other words, complete confiscation and redistribution of S&P 500 CEO compensation would make almost no difference for the average rank-and-file worker.

Even if we could confiscate 100 percent of the compensation of all S&P 500 CEOs, the typical worker would get about $1 per week in additional after-tax earnings.

The AFL-CIO can only get a distorted and wildly inflated CEO-to-worker pay ratio of something like 350-to-1 every year with a flawed apples-to-oranges analysis that compares the total annual compensation of a small, select group of CEOs in their prime earning years heading America’s largest multi-national corporations, who probably typically work 50-60 hours per week or more, to the average annual cash wages of part-time rank-and-file employees who work less than 34 hours per week on average.

Once we make a more statistically valid apples-to-apples comparison, the CEO-to-worker compensation ratio falls by 50 percent from the AFL-CIO’s expected 350-to-1 ratio to 177-to-1 once we consider total compensation for both CEOs and full-time (40 hours per week) rank-and-file workers employed by companies with 500 or more workers. If we assume a 60-hour work week for the average worker (to be comparable to the work week of an average CEO), the CEO-to-worker compensation ratio falls by two-thirds to only 118-to-1 for average CEO pay and 104-to-1 for median CEO pay. Further, even if we could confiscate 100 percent of the compensation of all S&P 500 CEOs, the typical rank-and-file worker would probably get about $1 per week in additional after-tax earnings. Big deal.

Just like last year, the CEO-to-worker pay ratio reported by the AFL-CIO gets my annual “Biggest Blindly Accepted Statistical Fairy Tale of the Year Award.” Well no, it’s actually a tie with the gender wage gap myth and the incessantly repeated “77 cents on the dollar” statistical falsehood. What’s disappointing is that much of the mainstream media seem to blindly accept both of these statistical falsehoods without ever challenging the “statistical legerdemain” that are used to produce and perpetuate these statistical myths.

One exception was this excellent article in 2015 by Investor’s Business Daily’s John Merline, (“Do CEOs Make 300 Times What Workers Get? Not Even Close“) who concluded:

What’s not understandable is why the mainstream press keeps repeating the massively inflated 300-to-1 number without noting the statistical legerdemain that produced it."