NFL Signals 2020 Season Will Happen Despite COVID-19 Risks. Here's Why

NFL executive vice president Jeff Miller told reporters this week that the NFL fully expects to have COVID-19 cases during the 2020 season and is planning accordingly.

Football fans around the world have been anxiously waiting for signs as to whether the NFL season will kick off in September despite concerns about the COVID-19 pandemic.

This week, they got the “burning bush” of signs.

The NFL on Tuesday had a soft opening of sorts, opening a number of facilities around the country to personnel, owners, and players rehabilitating from injuries. But it was in a post-meeting conference call with media that NFL officials delivered a bombshell of sorts.

According to multiple reports, NFL executive vice president Jeff Miller and Allen Sills, the NFL's chief medical officer, told reporters the NFL fully expects to have COVID-19 cases during the NFL season, and are planning accordingly.

"We have a task force working very diligently on that," Sills told reporters. "We fully well expect that we will have positive cases that arise because we think that this disease will remain endemic in society. And so it shouldn't be a surprise if new positive cases arise. Our challenge is to identify them as quickly as possible and to prevent spread to any other participants. So we're working very diligently on that, and we'll have some detailed plans to share about that at a later time."

It did not take long for reporters to process and interpret what the NFL was saying.

“You didn’t even have to read deeply between the lines,” said Charles Robinson, Yahoo’s senior NFL reporter. “What I just heard from the NFL was, ‘Hey, guess what? We are going to open. There is going to be a season. And we are going to have some people test positive for coronavirus once that season begins. And we’re working on a plan to not stop anything. We’re going to work through it.”

Terez Paylor, a senior writer who also covers the NFL for Yahoo, concurred.

“He’s saying they’re going to play,” Paylor said in a podcast with Robinson. “Basically [they’re saying], ‘People are gonna get it. We’ll try to deal with it the best we can.’”

To be clear, the NFL has made no official decision yet. That being said, it looks like they are heading in that direction.

While some will say it would be reckless to hold the NFL season during a pandemic, it appears the NFL is making its decision based on some of the same assumptions Sweden used in its unique approach to COVID-19.

Anders Tegnell, Sweden’s top infectious disease expert and the architect of its “soft-approach” strategy, said one of the reasons he rejected sweeping lockdowns is because the measures simply are not sustainable, considering COVID-19 is going to be with us for years.

“Many countries now have instituted these very strict lockdowns; they realize [now] this is not a sustainable measure,” Tegnell said in May. “I think one of the reasons we’ve chosen the way we have chosen in Sweden is sustainability. Because we know we’re going to have to deal with this disease for a long time, probably several years into the future before we can get some kind of normality.”

This sounds very much what Sills, the NFL’s top medical officer, is saying when he states, “this disease will remain endemic in society.” In a sense, the NFL is saying there is no hiding from this pandemic.

Remember, the goal of the lockdowns, at least initially, was not to prevent people from getting infected, but to “flatten the curve” so hospitals were not overrun. People will continue to get infected with COVID-19 regardless of whatever safety measures are put in place. As one top epidemiologist recently told the USA Today editorial board, it’s quite possible COVID-19 could soon infect 60 to 70 percent of the US population.

Humans are currently presented with two bad choices, I observed last week in an article on Sweden’s “long haul” COVID-19 approach: Maintain economically destructive lockdowns in the hope an effective vaccine is quickly developed; or begin to ease restrictions and accept that “the show must go on,” even in the presence of COVID-19, while taking less destructive approaches to confronting the virus.

The NFL appears inclined to take the latter approach, as are NFL players. Reports say the league and the NFL players union have reached a “broad agreement” on safety protocols that will no doubt be fine-tuned as training camp approaches.

Are there risks? Definitely. But evidence suggests those risks are low for NFL players.

In 2019, the New England Patriots had the oldest roster in the NFL, with an average player age of 27. Data from the Centers for Disease Control and Prevention show people in this age range have a miniscule risk of dying from COVID-19 (see graph). 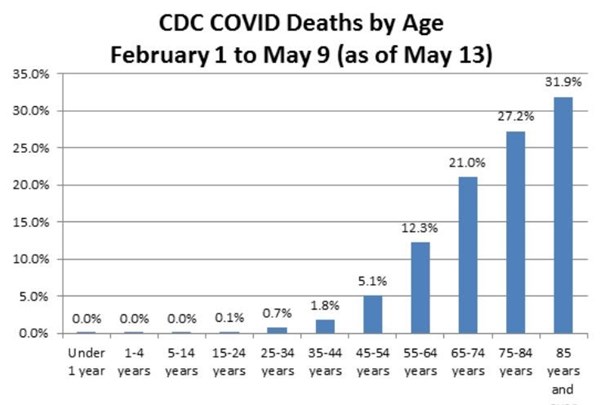 Individuals in the 15-34 age range represent 0.8 percent of all COVID-19 deaths, and it’s likely the vast majority of the victims had pre-existing conditions or compromised immune systems (unlike NFL athletes, who tend to be in immaculate shape). Because of the ramped up testing the NFL is putting in place, players who do become exposed will quickly be identified, quarantined, and treated (if necessary).

The league and players are seeking to balance the risks of COVID-19 exposure against the billions of dollars in revenue and the thousands of livelihoods at stake.

There is no question that risk exists, but as the newly elected president of the NFL Players Association, observed this week, risk is involved in all human action.

“There’s a level of risk to everything,” said Cleveland Browns center JC Tretter, according to the Associated Press. “You’re facing a level of risk right now going to the grocery store. There’s always going to be a level of exposure that people are going to face in this. So I don’t think we’ll ever get to a point where there’s no risk of exposure.”

Tretter is getting at an important principle here. It’s the idea of who should decide how much risk is acceptable in a given activity. It brings to mind a famous scene involving Milton Friedman, who fielded a challenging question from a student on the Ford Pinto.

The Pinto famously had a fuel system defect that made it susceptible to combustion in rear-end collisions. Studies showed that if Ford had used a more expensive part, it could have reduced collision deaths by 200 lives per year. But the increased costs (of the part and installation) would have exceeded the cost of deaths (estimated at $200,000 each).

In the popular video clip, the student tells Friedman he believes this is very wrong. Friedman, however, asked an important question.

“Let me ask you: Let’s suppose it would have cost a billion dollars per person,” Friedman asked. “Should Ford have put them in nonetheless?”

The student tells the Nobel Laureate economist that’s not what he asked. Friedman asks again, but the student can’t seem to answer.

What Friedman is trying to get the student to understand is that the student is talking about price, not principle. Friedman is showing that no one can possibly accept the principle that an infinite value should be placed on a human life.

So how do we decide the value? More importantly, who decides? For Friedman, the answer to that question is simple.

6 Tips on How to Ask For a Raise