The longer life in Sweden remains relatively normal, the more we should be encouraged.

Sweden is suddenly a punching bag on social media. What did the Swedes do to anger the Twittersphere?

Sweden, unlike its European neighbors and most US states, has declined to take a hardline approach to the novel coronavirus pandemic. Instead of instituting mass shutdowns and ramping up policing, Sweden has responded with a lighter touch.

People in this nation of 10 million still visit libraries and pools, which remain open. People can be found sipping IPAs in restaurants, though public gatherings are now limited to 50 people. Children still get up and go to elementary schools in the morning, although students over 16 have been encouraged to school at home. The government has also asked people to wash their hands frequently, encouraged remote work, and asked people to self-isolate if they feel ill or are over 70.

Essentially, instead of closing its economy, national leaders have asked its citizens to limit the spread of COVID-19 another way: by acting responsibly.

"There are a few critical times in life when you must make sacrifices, not just for your own sake, but also for those around you, for your fellow human beings and for our country. That time is now," Prime Minister Stefan Lofven urged his people.

Needless to say, Sweden’s approach to the coronavirus has created a bit of stir. After all, the world’s economy has been crushed by government shutdowns and tens of millions have been put out of work. Who are these Swedes to think they know a better way?

Which brings us back to Twitter. In recent days, influencers have begun to assert that Sweden is receiving its comeuppance.

“Sweden took a laissez-faire approach to COVID-19 while their neighbors shut down public life and sealed the borders,” one Manhattan Institute scholar observed on Twitter. “It looks like we're finally seeing the results.”

Data guru Nate Silver, founder and editor-in-chief of the influential statistics site FiveThirtyEight, also claimed that Sweden was “paying the price” for its laissez-faire approach to the coronavirus.

Sweden took a laissez-faire approach to COVID-19 while their neighbors shut down public life and sealed the borders. It looks like we're finally seeing the results. (Graph is cumulative deaths: Sweden yellow, Denmark red, Norway blue; screenshot from /r/Denmark) pic.twitter.com/Jg1qfqo1Ei

Three European countries that took a laissez-faire, "herd immunity' approach to coronavirus early on, the UK, the Netherlands and Sweden, are paying the price for it. They reported, respectively, 563, 134 and 59 deaths today. https://t.co/9fFIJJjqhz

Sweden’s gambit was naturally going to invite reproach. Humans may say they value non-conformity, but Voltaire was probably right when he observed the world does not.

“Our wretched species,” the French philosopher wrote, “is so made that those who walk on the well-trodden path always throw stones at those who are showing a new road.”

But do the data actually support the conclusion that Sweden’s leaders are getting people killed by not enforcing mass lockdowns? For now, that remains unclear.

Now, any serious discussion on COVID-19 should be prefaced by noting that the data we have is incomplete, fluid, and deeply flawed. That said, bakers use the ingredients they have. And right now, the data show Sweden has one of the better infection fatality rates in Europe.

First, it makes little sense to compare aggregate deaths in Sweden to those in Denmark and Norway, since Sweden has nearly double the population of those two countries. If we look at per capita figures*, we’ll see that Sweden currently has a death/1M population rate of 35/1M. (This means that, according to the best data we have, Sweden has suffered 35 deaths for every one million residents.) 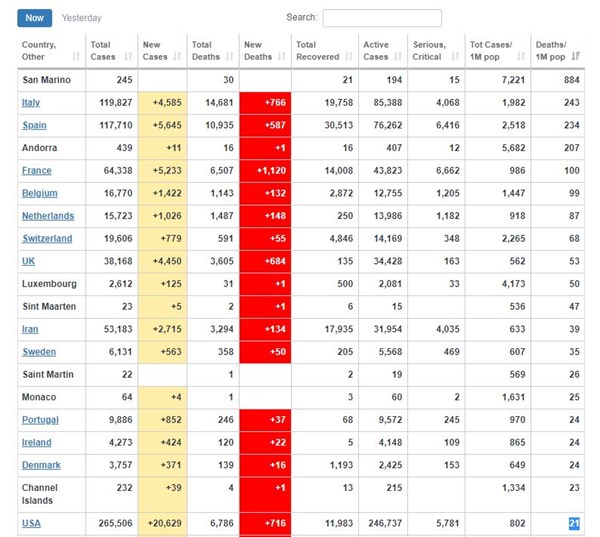 In his tweet, Silver compared Sweden (and the UK and the Netherlands) to the USA, which has one of the better fatality rates in the world right now (21/1M). He conveniently leaves out nations such as Belgium, France, Spain, and of course Italy—which have some of the worst fatality rates in the world and were also among the first to go into lockdown.

To be clear, I’m not suggesting there’s a causality between the lockdowns and the high fatality rates in these nations.

I’m merely saying there’s not yet sufficient evidence to say that Sweden’s laissez-faire approach has been a failure.

We are unlikely to know the results of Sweden’s experiment—encouraging social responsibility instead of issuing government threats and force—for weeks, if not longer. It’s possible the experiment will be a total disaster and cost many lives. It’s possible, perhaps even likely if deaths continue to rise, that Swedish political leaders will lose faith in the approach, and institute a more hardline approach

However, the longer life in Sweden remains relatively normal—kids in schools, adults in pubs, an economy pumping on most cylinders while people take sensible precautions—without an explosion of deaths akin to those witnessed in Italy and Spain, the more we should be encouraged.

If such a scenario does come to pass, it should also precipitate some soul searching. Why was the world so quick to employ force and the threat of force to impose mass shutdowns?

There’s a tendency to believe that free markets and cooperation work, except in difficult or “complex” situations that call for more assertive means.

The great Leonard Read saw the flaw in such thinking.

The more complex the economy, society, or situation, Read observed, “the more we should rely on the miraculous, self-adapting processes of men acting freely.”

*All figures comes from April 3.