How Murray Rothbard Discovered the Libertarian Movement and Austrian Economics

It usually begins with FEE.

Editor's note: A 1946 letter (see the bottom for a transcript and a scanned image of the letter) from a young Murray Rothbard to FEE (which had just been founded that year) marked the great thinker's introduction to the libertarian movement and afterward led to his introduction to Austrian economics. Later in life, in his book The Betrayal of the American Right (in the excerpt below), he reflected on this letter, what led up to it, and what followed.

It was in this stifling atmosphere that I first became aware that I was not totally alone; that there was such a thing as a libertarian “movement,” however small and embryonic. A young economics professor from Brown University began to teach at Columbia in the fall of 1946: George J. Stigler, later to become a distinguished member of the free-market “Chicago School” of economics. Tall, witty, self-assured, Stigler strode in to a huge class in price theory, and proceeded to confound the assorted leftists by devoting his first two lectures to an attack on rent control, and to a refutation of minimum wage laws. As Stigler left the classroom, he would be surrounded by moving circles of amazed and bewildered students, arguing with his point of view that seemed to them to be deposited all of a sudden from the Neanderthal Age. I was of course delighted; here at last was a free-market viewpoint of intellectual substance, and not simply couched in the lurid and confused tones of the Hearst Press! Professor Stigler referred us to a pamphlet (now long out of print, and still one of the few studies of rent control) jointly written by himself and another young free-market economist, Milton Friedman, “Roofs or Ceilings?” and published by an outfit called the Foundation for Economic Education (FEE), in Irvington-on-Hudson, New York. Stigler explained that he and Friedman had published the pamphlet with this obscure outfit because “nobody else would publish it.” Enchanted, I wrote away for the pamphlet, and for information about the organization; and by that act I had unwittingly “entered” the libertarian movement. (...)

But I discovered at FEE that Ludwig von Mises, whom I had heard of only as contending that socialism could not calculate economically, was teaching a continuing open seminar at New York University. I began to sit in on the seminar weekly, and the group became a kind of informal meeting ground for free-market-oriented people in New York City. I had also heard that Mises had written a book covering “everything” in economics, and when his Human Action was published that fall it came as a genuine revelation. While I had always enjoyed economics, I had never been able to find a comfortable home in economic theory: I tended to agree with institutionalist critiques of Keynesians and mathematicians, but also with the latters’ critiques of the institutionalists. No positive system seemed to make sense or to hang together. But in Mises’s Human Action I found economics as a superb architectonic, a mighty edifice with each building block related to and integrated with every other. Upon reading it, I became a dedicated “Austrian” and Misesian, and I read as much Austrian economics as I could find.”

I am writing to you at the suggestion of Professor Stigler, under whom I am studying for a Ph.D. degree at Columbia, and who is one of the authors of the pamphlet on rent control published by you. I believe it is entitled "Roofs or Ceilings?" I would greatly appreciate your sending me a copy of this excellent pamphlet, which certainly deserves the widest possible circulation.

I have been appalled at the attitude of the great majority of so-called "intellectuals." This attitude is one of passionate hatred of the capitalist and private enterprise system, admiration of all activities of ruthless power groups so long as these groups campaign on attacks against free enterprise (e.g. organized labor, the Soviet Union), and a shocking ignorance of the whole Western tradition of liberalism. Anyone who dares support the principles of the Rule of Law, of political and economic freedom, is immediately accused of being a "Fascist", a "black reactionary", a "paid agent of the N.A.M.", and is forthwith ostracized from "intellectual" society.

In view of this widespread and dangerous attitude among the influential "intelligentsia", it is imperative that organizations exist which disseminate the principles of economic liberalism, and dispel the vast amount of confusion that Leftist propaganda has generated in the public mind. The courage which you have shown in printing such an "unpopular" pamphlet leads me to believe that yours is such an organization. I would greatly appreciate your informing me of the program and purposes of your organization, and of other pamphlets and publications that you have issued. I wish to thank you for your generous cooperation. 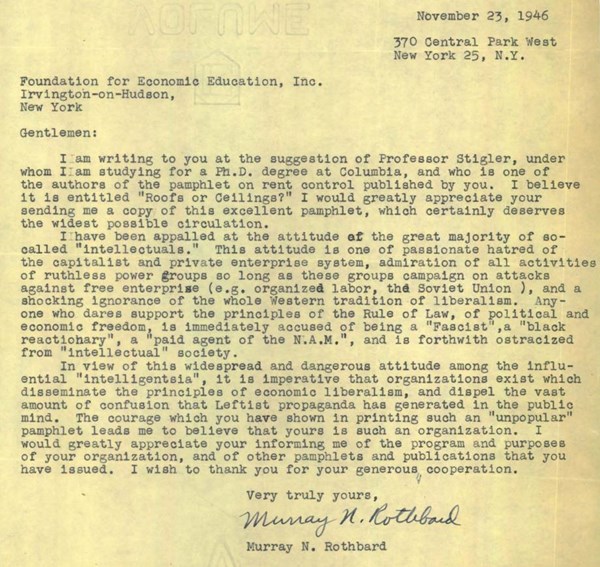 Murray N. Rothbard (1926-1995) was an economist of the Austrian School, a revisionist historian, and a political theorist whose writings and personal influence played a seminal role in the development of modern libertarianism.