The UK has the third fastest vaccination rate in the world. Within Europe, the UK takes the top spot—and it’s not even close.

After a year of lockdowns, vaccinations are finally making their way into the arms of eager citizens around the globe. The speed of that progress differs greatly between nations, however. The UK is doing quite well with the third fastest vaccination rate in the world, behind only Israel and the UAE. Within Europe, the UK takes the top spot… and it’s not even close. 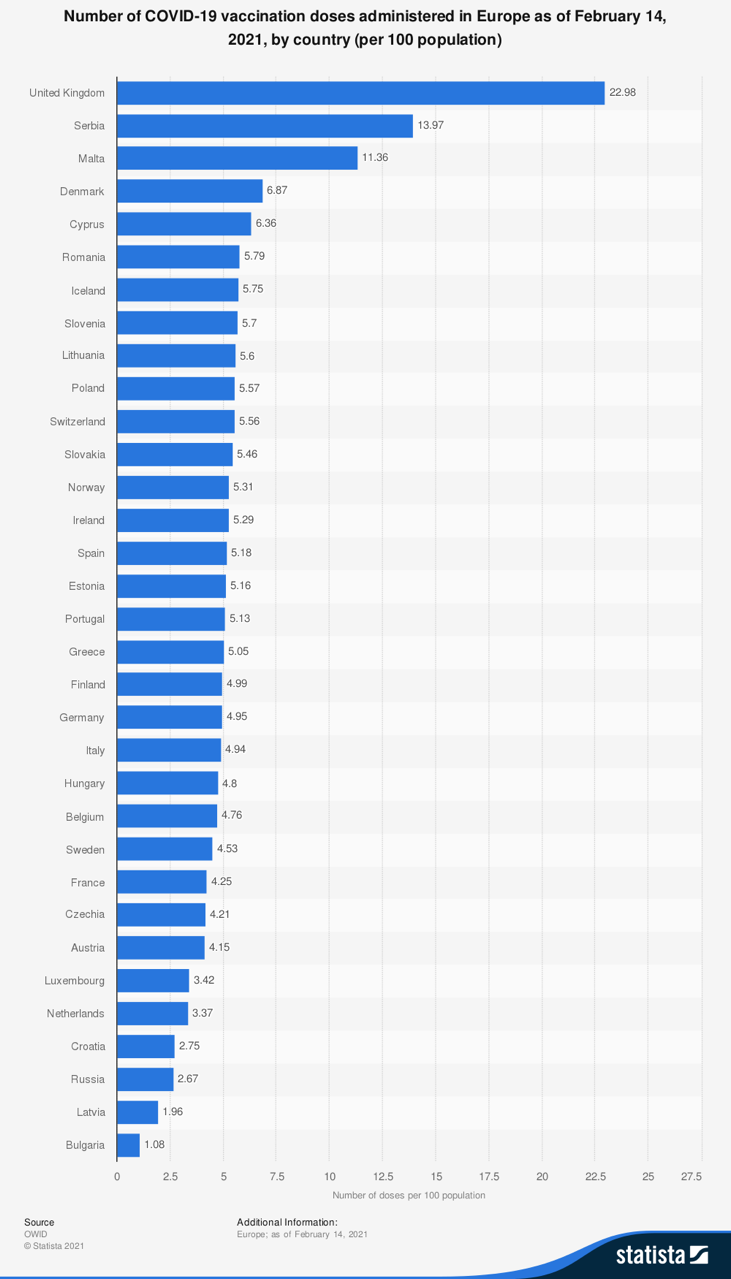 More than 16 million people have had their first dose in the UK and nearly 600,000 have completed their second dose, as of February 17. With a population of only 66 million, the UK is well on its way to having its entire adult population vaccinated by the summer.

“The British government declared Sunday that every adult in the country should get a first coronavirus vaccine shot by July 31, at least a month earlier than its previous target,” the Associated Press reported Sunday.

Contrast this impressive rollout with the European Union, where member states aren’t even vaccinating at half the rate of the UK. Even Germany, which often is given props for efficiency, is vaccinating at a quarter of the UK’s rate.

One reason for the slow vaccine distribution is the delay in approval by the European Medicines Agency (EMA), the regulatory agency that approves and recommends to the European Commission that a medicine can be marketed across the EU as well as in the European Economic Area. The EMA was nearly three weeks behind the UK in its Pfizer-BioNTech approval and only approved the AstraZeneca/Oxford vaccine on January 29 (a full month behind the UK). One of the reasons for this delay is due to the EU’s requirement that the drug label be printed in 24 languages.

Additionally, the EU delayed signing advanced purchasing contracts with vaccine developers last year. The UK committed to a deal with AstraZeneca in May while the EU waited until August. The EU also ordered too few vaccines during these negotiations and failed to invest enough money in the production plants within the EU (the Netherlands and Germany specifically).

More evidence of mismanagement includes the EU purchasing the failed Sanofi vaccine, supply shortages, a lack of nurses, and burdensome paperwork. EU member states are completely fed up. Hungary has bypassed the EU to approve both Russia’s Sputnik vaccine and China’s Sinopharm, neither of which are approved by the EU. Italy inexplicably attempted to sue AstraZeneca for failing to deliver their pre-ordered vaccines, despite the fact that the EU hadn’t approved it yet.

To cope with this embarrassing showing, the EU has demanded that exports and imports go through the EU first, in an attempt to hoard all of the product for member states. The EU even triggered but later rescinded Article 16 of the Northern Ireland Protocol of the Brexit agreement to institute a temporary hard border between the Republic of Ireland (an EU state) and Northern Ireland (a non-EU state), alleging the UK might intercept vaccines meant for the EU… as if.

What explains the EU’s bumbling vaccine rollout? The primary explanation seems to be its massive bureaucracy.

The economist Thomas Sowell once wrote, “You will never understand bureaucracies until you understand that for bureaucrats, procedure is everything and outcomes are nothing.”

The bureaucrats at the European Union have demanded to oversee every aspect of the vaccine development, including its approval, manufacturing, and delivery. Yet it is precisely this obsession with process that Sowell refers to which prevents regulators from delivering results in a timely manner.

Centralized Control and the Knowledge Problem

Back during the Brexit negotiations, “remain” voters and progressive publications warned that leaving the European Medicines Agency was going to endanger the lives of UK citizens. They could not fathom that a sovereign UK could make its own medical decisions without an official EU decree. But now, the dismal fruits of centralized decision making in the EU have demonstrated just how wrong they were.

The fatal flaw for the EU can be best explained by Friedrich Hayek’s "knowledge problem." The main idea is that problems are best addressed when solutions are ‘dispersed’ among individual people, or in this case, dispersed among individual countries within Europe and the private industries within them. Decentralized solutions are preferable because they leverage the distributed knowledge of producers and consumers, rather than relying on a single central planner who is necessarily ill-informed about the supply and demand of scarce resources.

The UK ‘dispersed’ or decentralized their vaccine process exceptionally well by way of two means. First, by regaining their autonomy from the EU, thus keeping all decision making in house. And second, by largely deferring to market experts rather than alleged government experts.

The Tories (the UK conservative party) are relentlessly pilloried for their insistence and reliance on outsourcing NHS contracts to private industry. But it is precisely this tactic that has enabled the UK’s rapid vaccine program. Europe hosts a panoply of private pharmaceutical research & development companies as well as drug manufacturers. The UK rightly deferred to these private entities, like Astra-Zeneca, Oxford BioMedica, Wockhardt Ltd., and Valneva, for their market expertise.

The UK government actually did something right by doing what governments rarely do—they largely got out of the way of private enterprise. For the record, the UK did provide funding to these companies to expedite the vaccine development process, and that funding was used to increase the scale of production. But the government retained local decision making and approval, rejecting the notion that one centralized savior would be the solution to the Covid-19 pandemic.

To be sure, local bureaucracies can suffer from the same knowledge limitations as international ones. All things being equal, however, they will possess more local knowledge than centralized bureaucracies and will make more rational decisions because of it.

This is evidenced by the fact that the UK deferred many key responsibilities to individual companies and opted to forego a framework that demanded bureaucrats oversee every minute detail of the vaccination process.

There were a lot of grave predictions made when the UK decided to leave the EU and restore its independence and self-governance. This EU vaccine fiasco has undoubtedly proven those skeptics wrong.

Sarah Lilly is an American expat and political writer living abroad in Switzerland. She blogs at Red State Abroad.