Exclusive: I Spotted Three of CNN’s Most Well-Known Names at an Indoor Billy Joel Concert—Without Masks On

Admonishing others for not doing something that you yourself do not do is the very definition of hypocrisy.

Earlier this month, Billy Joel finally returned to Madison Square Garden for his first show at the venue since the start of the COVID-19 pandemic.

I was lucky enough to be one of the just over 20,000 people in attendance.

Only a few minutes after sitting down prior to the concert starting, I noticed three people I recognized to my left. These were not people I knew personally, but rather some of the most well-known names at CNN: primetime anchor Don Lemon, Sunday show host Fareed Zakaria, and the president of the network, Jeff Zucker.

One thing that stuck out to me instantly was the fact none of them were wearing masks.

In the photo below, you can see the CNN employees clapping during a song at the concert, with Mr. Lemon in a brown sweater, Mr. Zakaria in the bottom left, and Mr. Zucker sitting next to him.

Representatives of CNN did not immediately respond to requests for comment. 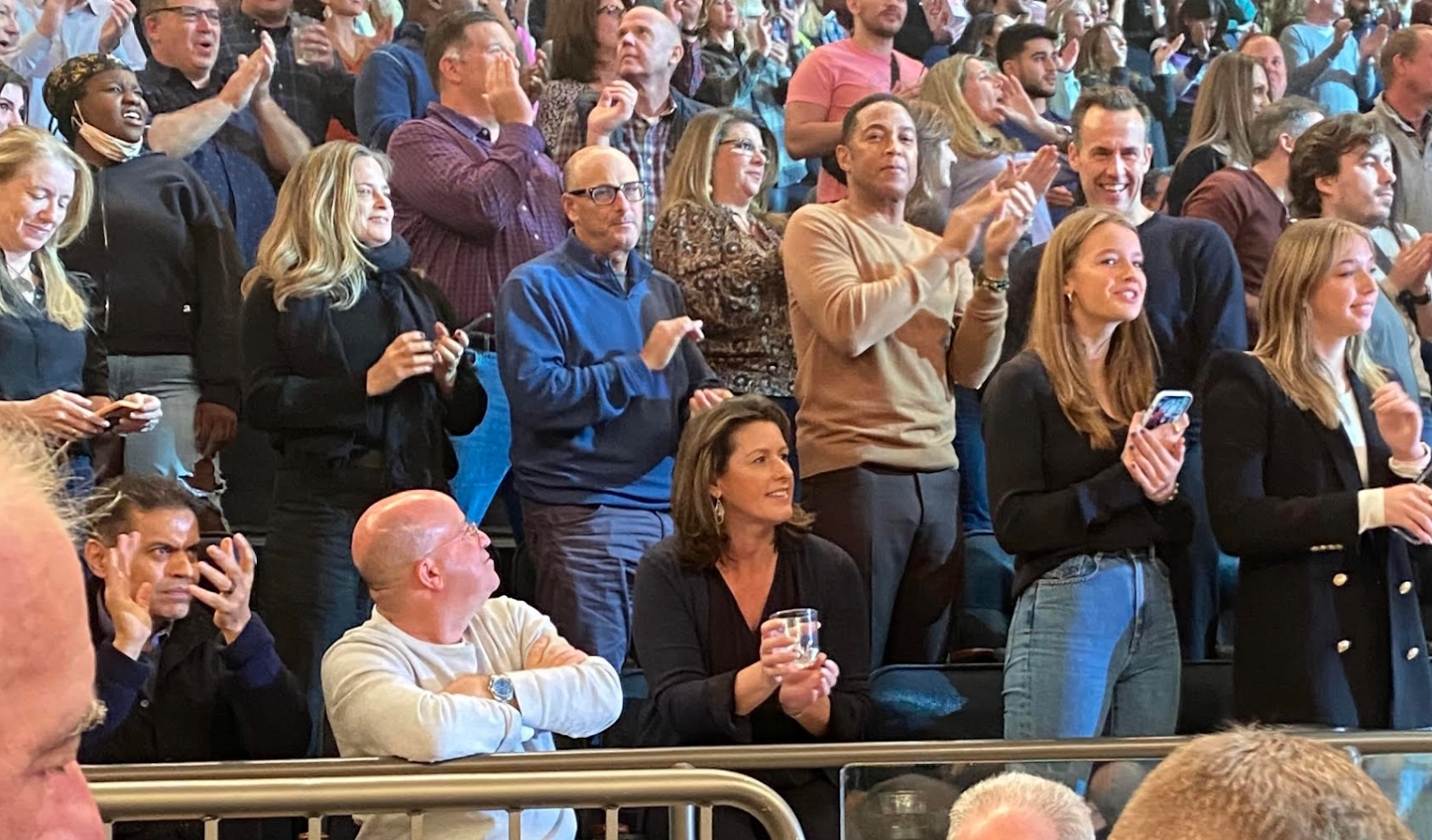 Their decision to go maskless was not in violation of any rules. They are all vaccinated, as proof of vaccination was required to enter the concert, and Madison Square Garden’s FAQ page notes that “Fully vaccinated guests are not required to wear a mask.” Moreover, as one can observe from the photo, they were far from the only ones taking advantage of the rule.

However, this fact does not suffice to keep the CNN employees out of hot water. This is particularly true of Mr. Lemon, who has gone on the record at length about masks — and mask mandates.

Mr. Lemon’s most recent — and extensive — comments about masking came during a monologue where he responded to Florida Governor Ron DeSantis’s opposition to mask mandates in schools. However, one would be mistaken to assume Mr. Lemon is only in favor of mandates within schools but not for society at large — which, if true, would make his actions entirely understandable.

After DeSantis argued that mask mandates, including those in schools, have “not proven to be effective,” Mr. Lemon responded by saying, “God, that is just such bunk, or just to say this is bulls--t, really? They want to protect the kids, governor. What do you want?” (To be clear, DeSantis’s order did not prevent individuals from wearing masks. It simply said schools could not force children to wear them. Even so, I personally opposed the order due to its infringement on the power of local communities to make their own policy.)

In the segment, Lemon went on to say that “It is just depraved. People are dying all across this country, people with loved ones who are grieving tonight. These are people who didn't have to die. Their loss is a very preventable tragedy.” Clearly no longer speaking about schools, it is obvious that he is voicing his support of mask mandates more broadly.

In a similar vein, he also noted that Texas Governor Greg Abbot contracted COVID-19 “after he attended [a] crowded indoor Republican club meeting,” disapprovingly adding that he “apparently [was] not wearing a mask.”

But, just like Mr. Lemon, Abbott is vaccinated. Why it is an issue when Abbott attends an indoor gathering without a mask but not when Mr. Lemon does — one with far more people, I may add — is anybody’s guess.

A skeptic could plausibly argue that even though Mr. Lemon has been ardently pro-mask — and even pro-mask mandate — in his rhetoric, his actions do not rise to the level of hypocrisy for two reasons. First, because he was technically not breaking any rules and, second, because he is free to make his own risk calculations.

The skeptic would be correct on both points if Lemon had not been such a vocal supporter of mask mandates — even going as far as suggesting that those who do not agree with him are indifferent to peoples’ lives. In other words, the issue is not the fact he was not wearing a mask in and of itself, but rather the hypocrisy associated with it in his specific case.

The reason this is hypocrisy becomes perfectly clear if we apply this same scenario to vaccines. If a person has not only passionately spoken in support of vaccine mandates, but has also imputed bad motives on those who do not support them, it would be perfectly clear that the person is a massive hypocrite if he — at the same time — decided not to get vaccinated. It may be true that the state in which he resides does not require vaccines. But admonishing others for not doing something that you yourself do not do is the very definition of hypocrisy.

And, in this case, it is not as if Mr. Lemon simply had a private opinion on the matter, therefore making his actions largely irrelevant to the general public. He, along with others at CNN and other news outlets, have played a crucial role in creating the vicious us vs. them political environment that has characterized the debate surrounding various pandemic restrictions.

CNN’s Response To Past Controversy

In response to a separate recent incident related to Mr. Lemon and masking, CNN defended their host. They wrote that his failure to wear a mask was not a big deal because he is not only “fully vaccinated and has received his booster shot,” but also his “activities were outside and were not in violation of CDC mask requirements."

This is all fair. Being outside at a pool is not a scandal — even with his past comments on masking.

However, it is important to note that, in this case, Lemon’s actions were 1) not outside and 2) in violation of the CDC mask guidance. The CDC says that “If you are fully vaccinated, to maximize protection from the Delta variant and prevent possibly spreading it to others, wear a mask indoors in public if you are in an area of substantial or high transmission.” New York falls into this category.

This is not to say that the government should institute mask mandates, but rather to point out that Mr. Lemon’s latest incident runs afoul of the standard CNN itself laid out just a few weeks ago.

Pandemic Hypocrisy And The Role Of Government

At the beginning of the COVID-19 pandemic, the standard phrase heard over and over again is that “we are all in this together.” That sentiment lasted about five minutes.

Soon after, examples of politicians flouting the COVID-19 rules they themselves put in place became numerous — whether it be California Governor Gavin Newsom, Chicago Mayor Lori Lightfoot, or Speaker of the House Nancy Pelosi.

While this latest act of hypocrisy by Don Lemon is somewhat different because he was not breaking any rules, it is no less emblematic of the attitude put forward by so many in the political class as of late: advocate one set of rules while living by another. I don’t expect this to change anytime soon, but it remains important to call it out.

In Billy Joel’s song My Life, which he sang at the concert, he says:

I don't care what you say anymore this is my life

Go ahead with your own life, leave me alone……

Obviously, a society that wishes to survive cannot do so if they take this idea to an extreme. However, it should be understood that the role of government in a free society is to protect one’s rights from being violated by his or her fellow citizens, not to ensure that individuals never make poor personal decisions.

Famed economist Ludwig Von Mises wrote that “Once the principle is admitted that it is the duty of the government to protect the individual against his own foolishness, no serious objections can be advanced against further encroachments.”

This is the trap Lemon is falling into by supporting widespread mask mandates. So, beyond the surface-level hypocrisy, it is equally important to recognize and counter the mistaken ideas about the role of government that currently permeate our society.

Jack Elbaum was a Hazlitt Writing Fellow at FEE and is a junior at George Washington University. His writing has been featured in The Wall Street Journal, Newsweek, The New York Post, and the Washington Examiner. You can contact him at [email protected] and follow him on Twitter @Jack_Elbaum.