Even the IMF Can See the Burdens of Bloated Bureaucracy

Since I’ve referred to the International Monetary Fund as both “the Dumpster Fire of the Global Economy” and “the Dr. Kevorkian of Global Economic Policy,” readers can safely conclude that I’m not a fan of the international bureaucracy. My main gripe is that senior bureaucrats routinely make the mistake of bailing out profligate governments (often as a back-door way of bailing out banks that foolishly lent to those governments), and they compound that mistake by then insisting on big tax hikes.

But as I’ve noted when writing about international bureaucracies, the professional economists who work for these organizations often produce very good work.

And that’s true even for the IMF. The bureaucracy published a study a few years ago entitled “The Size of Government and U.S.–European Differences in Economic Performance” and it has some useful and interesting conclusions. Here are some excerpts, along with my observations. We’ll start with the question the authors want to answer.

How much of a drag is the modern welfare state on economic performance? … One standard approach has been to estimate the disincentive effects of taxes and deduce that lower taxes would imply higher welfare. However, in the context of modern democracies, this argument begs the question why voters prefer an inferior economic outcome (a higher tax burden) instead of voting for parties that would minimize taxes.

Actually, we don’t need to “beg the question.” We get bad policies because voters get seduced into voting for politicians who promise to pillage the “rich” and give goodies to everyone else. And since voters generally don’t understand that this approach leads to “an inferior economic outcome,” the process can continue indefinitely (or until the ratio between those pulling the wagon and those riding in the wagon gets too imbalanced).

But I’m digressing. Let’s get back to the main focus of the study. The authors note that Europe isn’t converging with the United States, which is what standard economic theory says should be happening.

The academic debate over the long-term failure of European countries to catch up with U.S. economic performance also points to the need for a better assessment of the economic effects of large governments. Over the last three decades, European countries have not made inroads in closing a gap in per capita income vis-à-vis the US. …This paper focuses on…the role of the size of the public sector… The literature studying the impact of government on economic performance is large. Theory has focused on welfare effects—stressing the distortionary impact of taxation and government spending… observed government sizes generally tend to be too large, thus depressing welfare in many countries, or actual policies depart from allocationally optimal ones, especially in the “Rhineland-model” European economies.

And here are some of the results.

… a higher tax wedge results in lower hours worked. Moreover, the equation can be used to predict hours worked as a function of the tax wedge. …based on these calibrations, and using the welfare measure described in Appendix II, the steady-state welfare effects of varying the size of government can be analyzed. Table 2 provides the results of two such thought experiments: (i) to cut the marginal tax rate by five percentage points and (ii) to adopt U.S. taxation levels (in both accompanied by offsetting changes in spending), with the welfare change measured in the incremental consumption equivalent of the tax cuts. For example, had Belgium between 1990–99 cut marginal income tax rates by five percentage points, it would have reaped a welfare gain equivalent to 7⅓ percent of aggregate consumption (or of 21 percent if it had adopted US tax levels). These are large potential welfare gains from cutting back government.

Here’s a table from the study showing the theoretical gains from lowering tax rates, either by 5-percentage points, or all the way down to American levels. 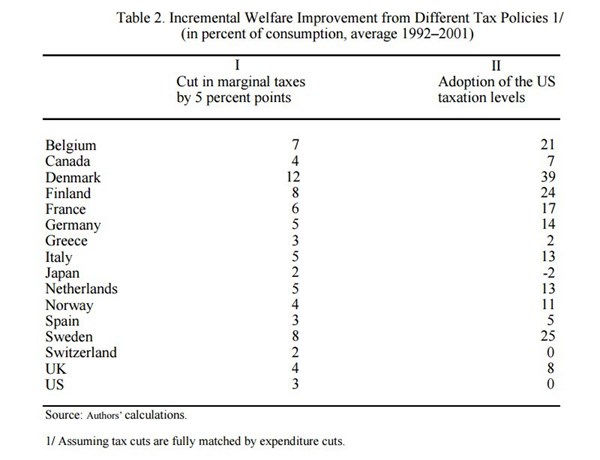 But the authors note that their model is incomplete, with some countries doing better than what’s implied by their fiscal systems.

The basic model has considerable difficulties in accounting for labor supply in very high-tax countries, which it frequently underpredicted (e.g., the Nordic countries, excluding Norway…). …One group comprising Sweden and Denmark… Both countries are often singled out as countries with large government, but, as seen in the previous, both also have higher than predicted labor supply in the baseline model.

The study tries to explain such differences by considering whether some governments spend money in an effective manner on “active labor market policies” that produce higher levels of labor supply.

Perhaps that’s a partial explanation, but I think there’s a much simpler way of making sense of the data. The Nordic nations, as I’ve repeatedly written, have strongly pro-market policies once fiscal policy is taken out of the equation.

So if you just look at fiscal policy, they should be way behind the United States. But since they are more market-oriented than America in other areas (trade, rule of law, regulation, and monetary policy), that shrinks the gap.

That being said, I’m not going to be too critical of the IMF study since it does reach a very sensible conclusion.

By the way, don’t assume this IMF study is an outlier. When economists at international bureaucracies are free to do real research without interference by their political masters, it’s not uncommon for them to produce sensible results.

Last but not least, here’s the video I narrated on the “Rahn Curve” and the growth-maximizing size of government.

Now if we could just get Hillary Clinton and Donald Trump to understand this research, we’ll be in good shape (actually, since those two are poster children for the theory of Public Choice, who am I kidding?).