Diversity Is Not a Deal-Breaker for Social Trust

Yes, diversity does have an effect on trust, but it's incredibly negligible. 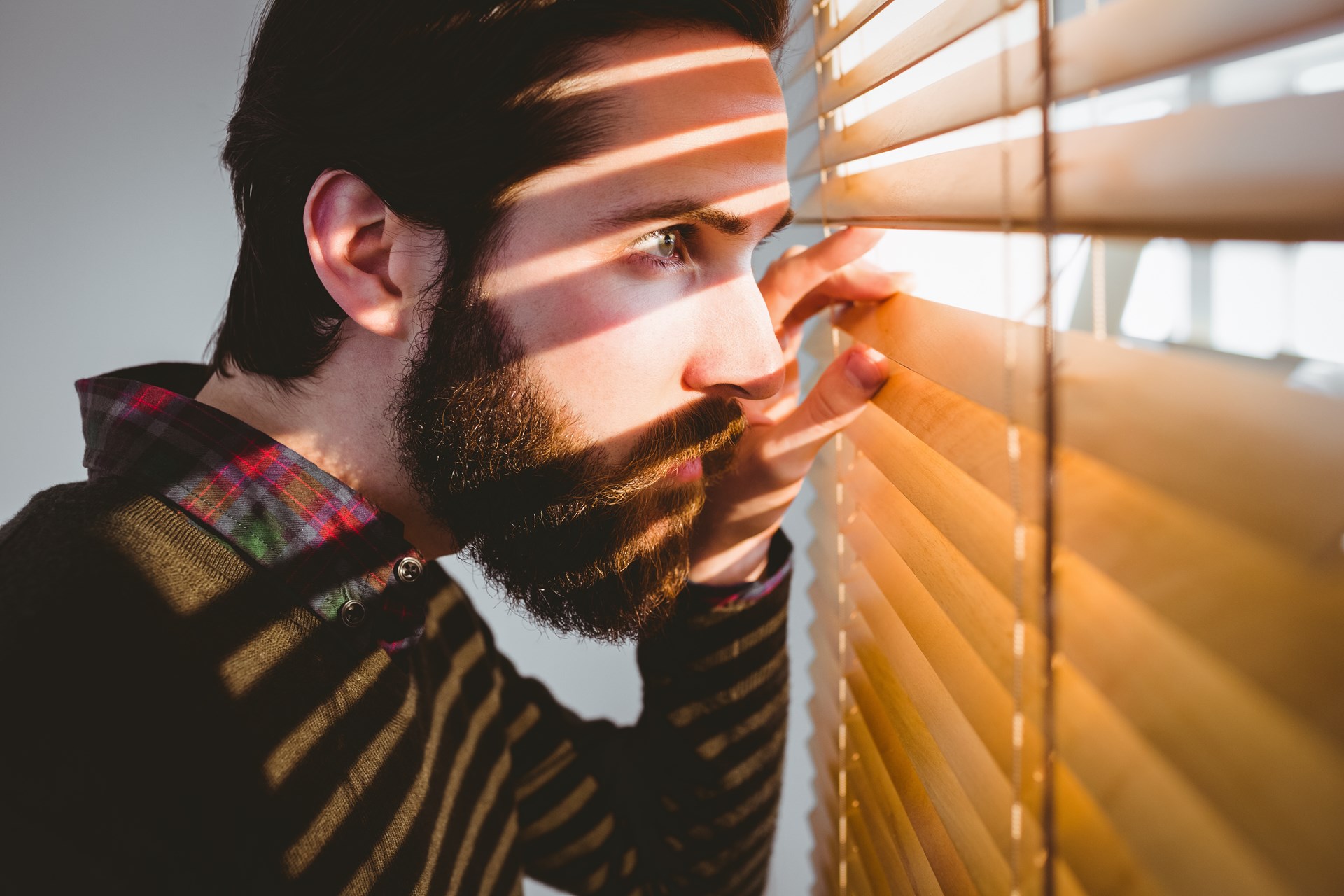 Robert Putnam, famed author of Bowling Alone, has spent much of his career regretfully publicizing the dangers of diversity. His most famous claim, of course, is that "social capital"—usually operationalized as "trust"—is vital for a good society. And though he's a liberal in good standing, he urges us to face facts: diversity—especially ethnic diversity—is very bad for trust. As Putnam's 2006 Johan Skytte Prize Lecture summarizes:

Diversity does not produce 'bad race relations' or ethnically-defined group hostility, our findings suggest. Rather, inhabitants of diverse communities tend to withdraw from collective life, to distrust their neighbours, regardless of the colour of their skin, to withdraw even from close friends, to expect the worst from their community and its leaders, to volunteer less, give less to charity and work on community projects less often, to register to vote less, to agitate for social reform more, but have less faith that they can actually make a difference, and to huddle unhappily in front of the television. Note that this pattern encompasses attitudes and behavior, bridging and bonding social capital, public and private connections. Diversity, at least in the short run, seems to bring out the turtle in all of us.

What's impressive about Putnam's piece, however, is that he takes the danger of spurious correlation so seriously:

[T]he diverse communities in our study are clearly distinctive in many other ways apart from their ethnic composition. Diverse communities tend to be larger, more mobile, less egalitarian, more crime-ridden and so on. Moreover, individuals who live in ethnically diverse places are different in many ways from people who live in homogeneous areas. They tend to be poorer, less educated, less likely to own their home, less likely to speak English and so on. In order to exclude the possibility that the seeming 'effect' of diversity is spurious, we must control, statistically speaking, for many other factors.

Indeed. And here is what Putnam finds when he uses multiple regression to predict individuals' trust on a 4-point scale. 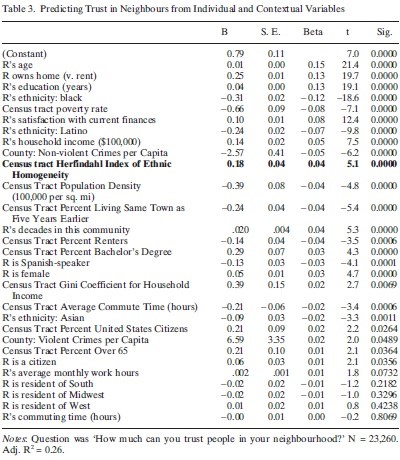 Putnam's measure of diversity—the Census tract Herfindahl Index of Ethnic Homogeneity—is in bold. It's the sum of the squares of each group's population shares, so it theoretically ranges—note the reverse coding!—from 0 (infinite diversity) to 1 (zero diversity). But since Putnam only sub-divides the population into four groups—Hispanic, non-Hispanic white, non-Hispanic black, and Asian—his diversity measure can't fall below 4*.25^2=.25.

Now imagine we move from a world with zero diversity to the maximum diversity.  According to Putnam's results, how much will this reduce trust? .18*.75=.14. Is that a lot? No way. Remember, he's using a 4-point scale. And since the current national Herfindahl Index of Ethnic Homogeneity is about .46, moving from the diversity of today to maximum diversity reduces predicted trust by a microscopic .18*.21=.04. "Diverse" communities have low trust, but the reason isn't that diversity hurts trust; it's that non-whites—especially blacks and Hispanics—have low trust.

Diversity's so unimportant for trust, you might not mention it at all. What's especially striking, though, is that Putnam finds several variables that strongly predict trust that almost no one discusses. Look at the effect of home-ownership. Not only do home-owners average .25 higher trust; there's also a -.14 coefficient on "Census Tract Percent Renters." Net effect of moving from 0 percent to 100 percent home ownership: .39. Holding all else constant, citizenship is good for trust: a mere .06 for the individual, but a solid .21 for the community. Net effect of moving from 0 percent to 100 percent citizenship: .27. There are also big effects of crime, population density, and commuting time. Geographic mobility, strangely, seems to reduce individual trust but raise social trust.

The latter variables don't just matter more than trust; they're also much more policy-relevant. Reducing diversity is very hard; indeed, without massive human rights violations, it's almost impossible. Home ownership, in contrast, can be fostered with not only tax incentives (the standard way), but housing deregulation (the wise way). Population density, similarly, can be reduced by deregulating development of suburban and rural land. Commuting time can be slashed with better public transit (the standard way) or congestion pricing (the wise way). Better policing and law enforcement—not to mention thoughtful decriminalization—all reduce crime rates. And if we take the estimated benefits of citizenship at face value, it can be raised to 100 percent with the stroke of an amnesty pen.

Putnam's numerous alt-right fans seem to relish his anti-diversity claims because he lends an air of respectability to their misanthropy. But if you read Putnam's whole article, it's hard to detect any ill will. Why then would he so grossly overstate the dangers of diversity? My best theory is just confirmation bias. Early on in his research, Putnam found strong univariate links between diversity and trust. When better methods show that this relationship matters slightly, Putnam—like most human beings—treats this as a vindication of his initial claims. But if all you knew were Putnam's final results from Table 3, you'd never reach Putnam's anti-diversity conclusion. Diversity's so unimportant for trust, you might not mention it at all.